The British Invasion of WHU Fans in America

Sunday afternoon and I find myself rushing into a McDonald's bathroom just outside of Washington, D.C.

Regardless of this unfortunate situation, I am still buzzing after West Hamâs victory at Everton. Maybe it's because I chugged two cups of coffee to both wake myself up and ensure I had something to do with my hands in a pub full of strangers (Why holding a cup never fails to ease social anxiety, I do not know.) 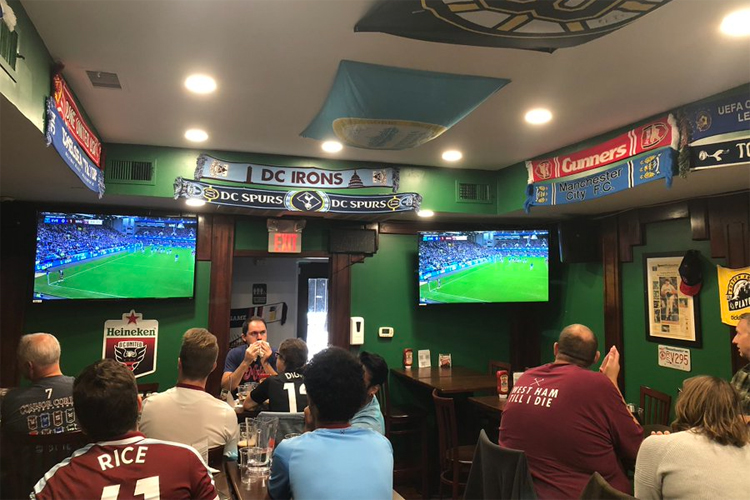 Somewhere in America, West Ham are on the telly

More likely though, this win is a personal one for me because recent history has shown that Everton do not reside at Goodison Park, but underneath the beds of young West Ham fans where the blue ghouls eerily scratch and claw against the floor inspiring a litany of recurring nightmares.

In the last 15 years West Ham are 6-15-9 against Everton. This is especially frustrating as one of my few fellow American *High pitched voice from the Inbetweeners* football "friends" is a Toffee. (Stateside âsoccerâ fans are less rare than they were a decade ago. But use the word âfootballâ to describe the beautiful game and you risk derision-filled remarks from big tough guys who think American footballâs hand-based game is somehow a more deserving recipient of the foot moniker.)

So, it was with our recent history in mind and in pursuit of camaraderie that I committed to watching the 9am Eastern Standard Time kick-off at a bar downtown, Across the Pond.

Across the Pond occupies one of those unique places in the hearts of football fans abroad, a safe haven where you know the pub will actually be open and the games will actually be on TV without having to cajole a disinterested bartender to find the remote and please for the love of God change the channel from the Cable News Network.

Since kick-off is usually a morning affair in America, my routine is usually to roll out of bed, brew up a pot of coffee and watch the West Ham match with my house plants and scarf for company.

But this Sunday, I put on pants and freed my girlfriend from an expletive-filled tirade wake-up call about our maddening proclivity for short corners.

The bar was packed and split right down the middle - blue clad Toffees on one side and claret hued Hammers of the DC Irons supporters group on the other. Throughout the match a chorus of West Ham fans would rise, fall, and rise again after one of Antonioâs âme-against-the-worldâ runs only to lose possession and for the Evertonians to counter with their own jest-filled roar.

A boisterous bar crowd is no substitute for attending a match in-person, but listening to the chants adds an infectious aura to the viewing experience. I didnât know the words, but now I do, and I canât seem to get the delightful little ditty âAinât Nobody, Like Lanziniâ out of my head.

Amidst all the excitement patrons ordered English breakfasts with eggs, hash browns and as an American I cannot grasp why this is a breakfast staple, but yes, beans.

Public opinion believed a goal was inevitable. When Ogbonna steered home a corner after 74 scoreless minutes, half the bar erupted. The other half took in the scenes in solemn silence, appeased that karma would give them an equaliser because surely Antonio had fouled Pickford in earning the corner.

The last time I was in a bar filled with West Ham fans we lost to Everton. While the result was eventually different, even before the winner the atmosphere was optimistic. This was a welcome change to the pessimistic realism that historically pervades a gathering of the Ironclad.

The final whistle blew (much too late in my opinion). West Ham were victorious, but it's only 11am and there was still a full day ahead. I drove to the library, only to find it didnât open until noon. I had an hour to kill, but my bowels had considerably less. Hence the post-match McDonaldâs run.

At ease after an eventful morning, I adjusted the driverâs seat of my 2013 Ford Focus all the way back to make room for my laptop and began to type out my thoughts. West Ham stand 7th on the table with the 5th best goal difference in the league.

It has been a turbulent past two years, to say the least. But with Declan as captain and Moyes at the helm I know I am not alone in thinking the future is bright for this squad.