New Under 23s boss Mark Robson was delighted to get his spell as coach at West Ham off to a winning start.

The former Peterborough assistant manager replaced the outgoing Dmitri Halajko last week and began his tenure with a 1-0 defeat of Manchester City, a win that sent the youngsters top of the Premier League 2 Division 1 table - much to the experienced coach's delight.

"I thought the lads did really well,” he told West Ham's website. “I don’t think our goalkeeper, Krisztian Hegyi, had anything to save in the second half, so defensively we were very good, and we had some great chances in the second half in particular.

"I thought the players gave everything today. They’re a good bunch and very much together as a group, which is always a good sign. In general, their work ethic was good and we could perhaps have won more comfortably."

The only goal of the game - indeed United's only shot on target - came from Sonny Perkins less than two minutes into the match, but it nonetheless proved enough to secure an important victory for the 23s.

And although they were themselves restricted to limited opportunites in front of goal, Robson felt it was the same for both teams thanks to some excellent defensive work from his new charges.

“It was a really good experience," he reflected, "I thought we restricted them to limited chances. From our point of view, we created a number of good ones.

"Manchester City pose you a different problem to lots of teams just because of the way they play. That’s the thing about this league: you’ll play teams like that. We played Gillingham a couple of weeks and that was a completely different type of game, in terms of them being quite direct.

“There were some really good performances. The back four were really good and our 'keeper’s distribution today was excellent. Our midfield four did their jobs really well and kept compact, kept their shape and made it hard for Man City.

“There were some really good performances – not just one or two, but five or six of them – so long may that continue. They have to keep performing and get even better. I thought we were good today, but there’s still lots more to come.”

Meanwhile team captain Ajibola Alese stressed that his side will now be doing all they can to retain their position at the top of the pile, having moved above previous leaders Arsenal - even though he was positively surprised to learn they had moved above the Gunners. 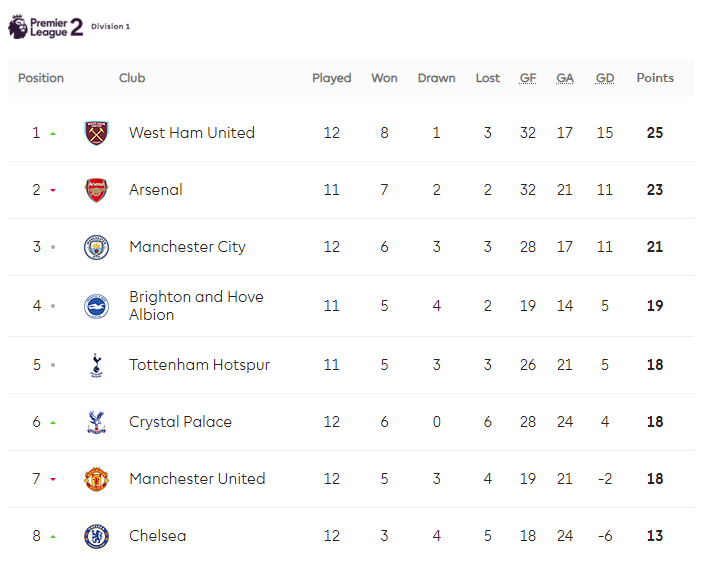 "We just need to keep working hard and keep fighting to try and stay there," he told whufc.com. "I didn’t actually know we’d gone top!

"The only thing that could have been better were if we got a few more goals or if I'd scored myself! As a defender, when you keep a clean sheet that’s you doing your job well and to get the win was also good on top of that.

“Whatever age group you’re playing at you know that Man City are going to be good, so to come away with a 1-0 win and three points, having faced no shots on target and a clean sheet - well that’s the best that we can do.

“We’ve won four out of our last five games now, so we need to keep going, keep improving and keep showing people that we’re good players and a good team.”
* Something to say about this story? Please visit the KUMB Forum to leave a comment.