Blowing Bubbles has been shortlisted for the Football Supporters' Association (FSA) Fanzine of the Year award. 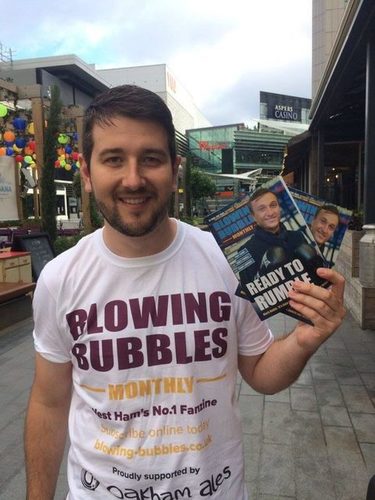 “I'm absolutely delighted,” said Editor David Blackmore. “To be in such an elite group of fantastic football publications is a massive pat on the back and recognition of not only the huge amount of time and effort we put into producing every issue but also to the continued support we've had from the West Ham Family.”

It is the second time that Blowing Bubbles has been shortlisted for the annual award after a 2015 nomination.

At the FSA awards, a total of 84 candidates will battle it out across 14 categories, recognising everything from the best players of 2021 to the best podcasts, writers and pundits. The Fanzine of the Year is one of four categories for which it is not possible to vote on - the winner is selected by the FSA panel.

The winners of all the awards are being revealed at a ceremony held at The Londoner Hotel in Leicester Square on Monday 29th November, presented by Victoria Derbyshire.

As for Blowing Bubbles, it launched digitally and in print form in summer 2012 and last year clocked up its 100th issue.

Over the past nine years, it has grown into a publication with hundreds of dedicated readers online and in print, giving Irons fans a platform to air their views, positive and negative, as well as speaking to many of the biggest names in Hammers history to create a significant archive of West Ham moments and memories.

Initially envisaged as a digital-only offering, David decided to produce a print edition as well, and launched the first issue at the first game of the 2012-13 season, with the pages being filled by content produced by himself and a team of journalists, initially recruited via Twitter.

Since then, the magazine has grown, recruiting Phil Parkes and George Parris as monthly columnists, and making sufficient impact to catch the attention of co-owner David Gold, who has given David several one-on-one sit down interviews, something for which he says he respects the often-criticised Gold.

You can save £5 on any subscription to Blowing Bubbles by using the code 2021saver when checking out.

The FSA (previously known as the Football Supporters' Federation) is an organisation representing football fans in England and Wales. For further details about the FSA awards and to vote for other categories, head to https://thefsa.org.uk/news/fsa-awards-2021-shortlists-announced/
* Something to say about this story? Please visit the KUMB Forum to leave a comment.