Back in 2004, readers of KUMB.com voted for their greatest West Ham moments. With seven years having passed since - during which we've witnessed a number of memorable occasions, matches and goals - we decided to revisit the list in order to include some of these more recent events. On New Years Day 1972 the formidable Manchester United - including stars such as Dennis Law, Georgie Best and Bobby Charlton - arrived in east London having lost just two of their last 23 fixtures. However West Ham, inspired by the young midfield duo of Billy Bonds and Trevor Brooking taught the Red Devils a footballing lesson in front of a 42,000 crowd at the Boleyn Ground, sending them back up the M1 on the wrong end of a 3-0 stuffing.

Second half goals from Clyde Best and Geoff Hurst (from the penalty spot) secured the points for Ron Greenwood's side but it was Bryan 'Pop' Robson's audacious back-heel - something fairly unique at that time - which opened the scoring five minutes ahead of the half-time for which this game is most fondly remembered. The atmosphere on a training ground can often be fractious and never (well, almost never) was it more so than when Alvin 'Stretch' Martin gave former trainee Matthew Rush - now a sports scientist - a right-hander in front of the watching press pack after the youngster upset the former England international. Although both players were considered to be reasonably 'tasty', manager Harry Redknapp was less than impressed with the pugilistic qualities on display, telling reporters: "I've seen better fights at weddings". 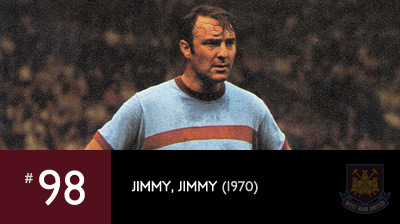 In what was to become the template for many deals in the ensuing years, a washed-up Jimmy Greaves joined West Ham from Spurs in March 1970 as part-exchange for Martin Peters who went the opposite way in addition to a then-record Â£200,000. However West Ham fans were given a glimpse of the old-Greaves - albeit briefly - when with his assistance, the Irons smashed Manchester City 5-1 at Maine Road just days after his arrival at the club - an all-the-more surprising result given that the corresponding fixture had ended 4-0 to City just three months earlier. Greaves recorded his first strike for the club just ten minutes into his debut and a second just before the half-time break to set West Ham on course for victory; he was to score just twice more that season. 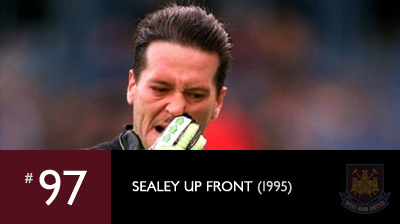 Harry Redknapp was fond of using the phrase 'bare bones' during his tenure - but for once he had a reasonably legitimate claim back in September 1995 when West Ham travelled across town to face Arsenal at Highbury. Having had Julian Dicks sent off for a second bookable offence ten minutes into the second half and seen the Irons fall behind to a 75th-minute Ian Wright penalty (his second of the game) Redknapp turned to his bench - and saw only goalkeeper Les Sealey grinning back at him, having already used two of his three available substitutes.

Whilst the late Sealey's uncle Alan may have scored the goals that landed West Ham the Cup Winners Cup in 1965, Les' own experience of playing up front was ... well, nil. Yet this didn't prevent Redknapp from slinging him on up front as an 83rd minute replacement for John Moncur, who is almost certainly West Ham's only outfield player to have been substituted for a goalkeeper. I wonder if you could find betting promotions to offer odds on Marek Stech replacing Carlton Cole? 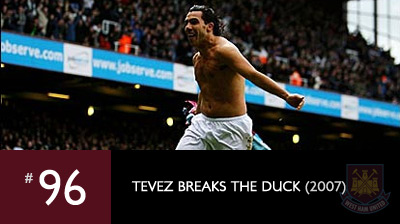 Argentinian international Carlos Tevez, along with compatriot Javier Mascherano arrived at West Ham on transfer deadline day, August 2006 - a deal that stunned the footballing world (and not without good reason, as it later transpired). The striker's move to England had looked destined to fail after a barren spell of SIX months without a goal before he shook the Boleyn Ground to its rafters with possibly the most memorable debut goal ever.

Deep in trouble at the foot of the table and with time running out, the Irons went into the game on the back of five consecutive defeats - including a 4-0 drubbing at Charlton the week before. During that period Alan Curbishley's side had scored just one goal - so Mark Noble's 16th minute strike, courtesy of a Tevez lay-off brought much relief to a tense crowd. However when Tevez lined up a 20-yard free kick with 41 minutes on the clock an expectant hush descended upon the Boleyn Ground.

Tevez collected his thoughts, stepped up, sent a wicked, dipping shot off the underside of the crossbar - and the BG exploded like it hadn't done in years. Tevez ripped off his shirt, threw himself over the ad boards and into the corner of the Dr Martens Stand, instantly earning himself a place in this list in the process. One bizarre night in November 1997 literally left everyone present at the Boleyn Ground in the dark - before it was eventually revealed that West Ham had been the victims of a betting syndicate who had targetted three Premiership matches in order to scam the bookies. Their mission was to plunge the games in question into darkness - a brief that failed spectacularly when four members of the group were arrested in February 1999 whilst preparing another blackout.

However that was long after West Ham's midweek home fixture against Palace had been abandoned with the game delicately balanced. Palace had roared into a 2-0 lead after dominating the opening 45 minutes before John Hartson's header reduced the deficit shortly after the interval. A 67th minute Frank Lampard drive restored parity - and as Junior's shot hit the back of the net, the lights went out never to return. Which, in hindsight wasn't such a bad thing as the Irons walked the rearranged fixture 4-1. 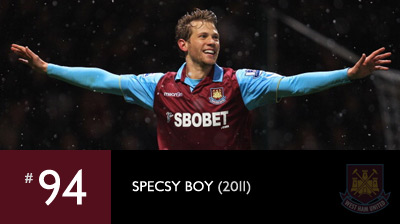 It can never be said that Jonathan Spector has had an easy time of it at West Ham. Constantly overlooked by a succession of managers - and to his considerable credit - the American international has never complained (publicly, at least) choosing instead to get on with his job. It is said the every dog has his day and Spector was finally rewarded for his patience in November 2010 when, due to a number of injuries, he was selected to start against eventual league champions Manchester United in a Carling Cup quarter final tie.

With the Irons having been granted home advantage - and snow swirling around the ground on a bitterly cold night - Spector took to his former club like a man possessed. Fifteen minutes in and a first effort was ruled out for offside. Unphased, the midfielder continued as he had begun and put his team 1-0 up on 22 minutes with a diving header - as rare a thing as you will ever see. However that wasn't enough for Scott Parker's stand in and he duly added a second 15 minutes later, before two second half goals from Carlton 'Overchuffed' Cole confirmed West Ham's first four-goal haul against the Mancs since May 1977. Having seen off the challenges of La Gantoise, Spartak Prague and Lausanne in the preceeding stages of the 1964/65 Cup Winners Cup competition West Ham were pitched against the hotly-fancied Spaniards in the semi-final. At stake was a Wembley final against TSV Munich, conquerors of Turin in the other semi-final- surely an opportunity too good to be missed?

Brian Dear certainly thought so for it was the big striker who gave West Ham the lead inside the opening ten minutes at the Boleyn before Budgie Byrne sent the Hammers two ahead on 24 minutes. However Ron Greenwood's team were to leave the field to a chorus of boos after deploying no less than nine defensive players for the second half, in which they conceded one with Canario scoring for Zaragoza.

In defiance of the negative reaction to his tactics in the first leg Greenwood employed similar tactics for the return tie and although West Ham went a goal behind behind to a Lepetra effort early doors, Johnny Sissons' 54th minute equaliser was enough to send the Hammers back to Wembley for the second time in a year. 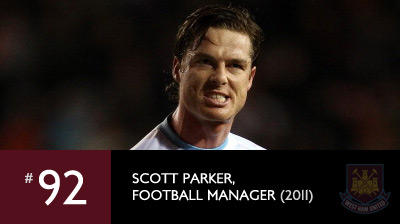 In 2011 English international Parker was awarded the Hammer of the Year trophy for the third successive year along with the Football Writers' Player of the Year award - well-deserved recognition for West Ham's vice-captain. However it was an incident midway through the season in which his spirit and determination was perfectly encapsulated.

West Ham were away to fellow strugglers West Brom and found themselves 3-0 down within half-an-hour after an absolutely shocking start. With manager Avram Grant offering little in terms of ideas or motivation, Parker took it upon himself to deliver a speech that left Carlton Cole remarking 'I was like wow, this is the real deal' - which we think must have been positive as the Parker-inspired West Ham came out, scored three goals (Demba Ba (2) and Cole) and earned themselves a point from a game that had already been lost. 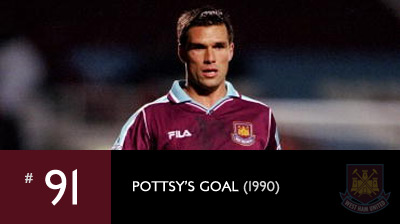 There can't be too many professional (non-goalkeeping) players out there who fail to score a single goal in their entire career. Yet poor Steve Potts, West Ham's central defender who had been with the club since the early 1980s was on his way to achieving that before he finally broke his duck after five years in the first team. Hull City were the opponents on a chilly October afternoon and went into the game in good form, having been unbeaten in their previous seven fixtures. However they were simply swept aside by a rampant West Ham who ran out 7-1 winners - one of which was Potts' goal (United's second on the day). The American defender, who went on to make 399 first team appearances for West Ham never scored again.