A packet of three: Sunderland

Join us as we cast our eyes back at previous encounters between West Ham and tonight's opponents and pick our three favourite games...

The sixties were a great time to play Sunderland if you were a West Ham supporter. The Hammers smashed four goals or more passed the hapless Mackems on no less than four occasions and scored 29 times on the 12 occasions the two teams met during the decade.

Little more than a year before Geoff Hurst broke all sorts of receords in the 8-0 drubbling at the Boleyn, the Hammers went to Roker Park and recorded their biggest ever away win on Wearside in another record-breaking meeting.

Extraordinarily perhaps, Ron Greenwood's side found themselves 1-0 down at the break thanks to a Bobby Moore own goal after the England captain turned Neil Martin's cross into his own net just 12 minutes in. However an in-form Sunderland were destroyed in the second half by a 16-minute, five goal blitz.

The rout began on the hour mark when Martin Peters levelled the scores with a absolute belter. A minute later West Ham were ahead when United's third and final World Cup winner, Geoff Hurst, grabbed his first goal of the day.

Still reeling from going behind, Sunderland conceded a third goal in three minutes when Harry Redknapp made it 3-1 with a 30-yard drive. The rout was completed when Hurst and Moore - another long-range effort - scored within a minute of each other in the 75th and 76th minute respectively to condemn Ian McColl's team to their first defeat of the season. 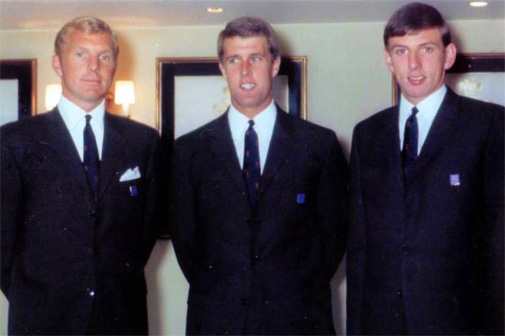 World Cup trio: all three were on the scoresheet back in 1967

On this chilly October afternoon, West Ham United's smallest crowd of the season gathered at the Boleyn Ground to witness what became a record-breaking First Division match for a number of reasons.

Firstly, West Ham's 8-0 win equalled the club's record win; secondly, goalscorer Geoff Hurst achieved a feat that hasn't been matched in the ensuing 44 years by scoring six of them - and thirdly, he also achieved the rare feat of scoring a hat-trick in each half (which is also unlikely to have been repeated - let us know if you're aware of anyone else matching that extraordinary feat).

Hurst admitted post-match that the first of his record haul - scored on 18 minutes - was deliberate handball, which is reported to have infuriated the visitors. However there was nothing dubious about any of the remaining five, which arrived in the 34th, 44th, 48th, 61st and 71st minutes.

Scoring the other two goals on this record-breaking day were Bobby Moore (who made it 2-0 on 26 minutes) and Trevor Brooking (7-0 with 62 played). The Club were so pleased with Hurst's contribution that they presented him with SIX match balls, rather than the customary one for netting a hat-trick.

It was the year we all thought West Ham's name was on the Cup. Having achieved wins at Walsall and Manchester United in previous rounds of the competition, this victory at the Stadium of Light - on what was only our third ever visit there following Sunderland's relocation from their former Roker Park home - sent the Hammers through to the quarter finals, where we were sent tumbling out of the tournament in our first home draw against Tottenham!

A team containing the likes of Michael Carrick , Joe Cole, Frank Lampard and Paolo Di Canio was alway capable of causing an upset, just as they had done in the previous round at Old Trafford where Di Canio's late winner delighted not just the 9,000 travelling fans but the entire (non-Man Utd supporting) nation. Despite those wins the home side - who had beaten Crystal Palace and Ipswich to reach the fifth round - started this tie as favourites.

However once again the Hammers were to provide a shock when Freddie Kanoute scored the game's only goal in a sparsely-populated stadium as the match teetered towards a replay. Kanoute - who had been frustrated considerably by a string of refereeing decisions that had gone against him throughout the day - finally got his chance on 76 minutes when converting a clever Lampard through ball.

Oddly perhaps, the Mali international's goal came at exactly the same time at which Di Canio had scored his memorable winner in Manchester in the previous round...

Can West Ham survive? A season in stats

The genesis of our demise

The London Stadium: a day in the life