How well are we playing the generation game?

I'd like to talk about legacy. The West Ham United we will pass onto our kids. The ones who have never been inside the Boleyn Ground but will have the much-maligned London Stadium as their home.

Now I know a whole host of folk will have glazed over at the mention of legacy, but I have thought about it a lot recently and decided that us old timers must carefully put aside our memories of the past, Upton Park and the good old days, and make sure the next generation have something tangible, something of their own, to carry forward.

And, before anyone starts, I am not saying we all have to forget the past, our former home for over a century and the very rocky road to our current position after nearly three years in Stratford.

But this is not going to change for 100 years, this is the club's home and the only home our kids will know.

How we got here, why, and who is responsible really will not interest the next generation. Somewhere along the line we have to put our own displeasure, anger even, behind us. Some have never moved to the LS, some are here reluctantly, some don't think this is West Ham any more. Some just love the new, modern era.

But there has to be a future. I have spent a bit of time watching how younger folk have adapted. I even spent time at the popcorn stand recently. The symbol for so many of all that is wrong with our rented home.


I watched young fathers with their kids, marching up to the stall and buying... yes buying...popcorn. Their kids loved it. And if we keep playing like we are and start producing entertaining football regularly, those kids will be back. The Chicken Run, North Bank, South Bank, will just be something they see in history books, or are told about by boring old codgers like me.

I watched one of my mates with his nine year-old daughter recently on her first visit to the LS. She loved the occasion, the noise, the atmosphere, she will be back. There's a guy who sits behind me in the BML who has always had his young daughter with him. She knows all the songs, the players, she will be back.

My own grand daughter, who is four, sits at home with her dad on Sunday mornings to watch Match of the Day and has started to cheer in all the right places watching 'daddy's team.' She might even make her debut soon with her dad and grandad. You never know.

What I am getting at is that we have to make the place a welcoming environment for these next generation kids. They like popcorn, so what's the problem? For some people this stadium is not to their liking, some feel they were brought there under false pretences. It's not like the old place. I can see that, but I feel it is about time that we started to welcome the new breed, make them feel at home, give them a club to be proud of.

And this brings me onto the club's responsibility, and how they take us forward. We are seeing some of that with the arrival of the new Official Supporters' Board, and however much the club give it the big promotion, there are already problems.

It's up and running now and I genuinely wish all the fans' involved, people prepared to give up their time for their club, the very best of luck. I thought, briefly, about getting involved myself, but I live far too far up north for that to be practical, and I probably could not have found six people to propose me anyway!

I must admit when the club decided to abandoned the much-maligned Supporter Advisory Board (SAB) last season in the wake of all that nasty talk about rebellion and marches, I was naively expecting a very democratic new venture. The chance to vote, even, for someone to represent me. Not the same as before, where people were appointed and not elected. It's not really been like that, though. And plenty are not happy.

I must admit, my primary school 'I Spy' democracy book had nothing in it about selection. However the club dress this up, folk were invited to apply with six friends to vouch for them, and then there has been a selection process.


The club insists this is different. Anybody could apply, and an independent panel has selected members, who have been anonymised. The panel selected the best candidates based on their West Ham history.

I suppose if Jack the Ripper was still around and applied, saying he was a good old Cockney boy and did corrective charity work with the fallen women of Whitechapel, oh and he was a season ticket holder at the Memorial Ground, he may have been selected after being anonymised.

The club have an independent panel doing the selection, but there are people with club connections involved in it.

The flaws are obvious. I believe the club, keen to have creditable recognition for the new group, asked the Football Supporters Federation for help, the group recognised now throughout the game as the most democratic fans group out there. But when the Football Supporters' Federation (FSF) realised how the structure was being set up, they politely declined and now do not recognise the new body.

Our own West Ham United Independent Supporter Association (WHUISA), who are affiliated to the FSF, also declined to take part claiming a "lack of transparency and democracy" and of being happy "with the restrictions the club imposed on its members". Basically a non disclosure issue. KUMB also decided not to take part for similar reasons.

The fact that the club's press officer has banned KUMB's editor for having an "unduly negative twitter feed" - after being involved with the club and various supporters bodies for over 20 years - can hardly have helped. Frankly it's almost a right of passage as a West Ham fan to be cynical and negative, so much nonsense have we had to endure.

Such a flagrant abuse of the freedom of the press, free speech and all those boring things that make our society acceptable, is hard to imagine. I have had the privilege of working with some hugely experienced press officers, and never once seen someone banned because his opinion did not fit the party line.

People like Ian Cotton at Liverpool who had to handle the Hicks-Gillett ownership fiasco as well as Rafa Benitez; Darren Griffiths at Everton, Vicky Kloss at Manchester City, Paddy Harveston at Manchester United who went on to be Prince Charles' press officer. None of these would have banned someone for having a different opinion to the club's. 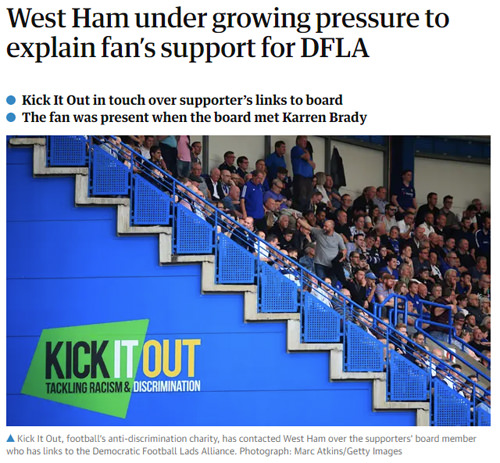 Anyway, the new OSB has already hit a problem, the one that seems to dog this club of late. We have already had a senior member of staff sacked because of racist remarks. Then there was an Academy coach suspended because of his comments on social media after attending a Democratic Football Lads' Alliance march.

The DFLA is a group condemned by anti-racist campaigners, and were the subject of a Premier League investigation last season, with club's being warned of their growing involvement at stadiums.

Now the Guardian have claimed that a new member of the OSB has DFLA sympathies and has also attended marches. There has now been a complaint from the Kick It Out group to that effect. And our own WHUISA have weighed in with a statement claiming the club have not vetted new members properly. They added in a statement:

"We condemn extremist groups which manipulate legitimate concerns of our fans for the purpose of social division. The club have failed to vet members of the new OSB and should act to distance itself from all groups that create division or promote discrimination."

So there you have it. A bit of legacy I believe a majority of fans would like to see the back of. This is surely not the start to the OSB's existence that the club would have wanted.

Trouble is, if you speak out on such matters, you get branded a snowflake. Now if opposing homophobia, Islamophobia, racism or anti-Semitism - all of which can be found on various West Ham fans' social media , I am told - makes me a snowflake, then I'm proud of that. I am not sure this is the legacy the club would want.