Back in 2004, readers of KUMB.com voted for their greatest West Ham moments.

With several years having passed since - during which we've witnessed a number of memorable occasions, matches and goals - we decided to revisit the list - for a second time (the first being in 2011) - in order to include some more recent events.

Due to the vast size, we'll be breaking our countdown down into ten parts; here follows part one - that's entries 100 to 91. Please note the number in brackets represents the entry's previous position in our list. 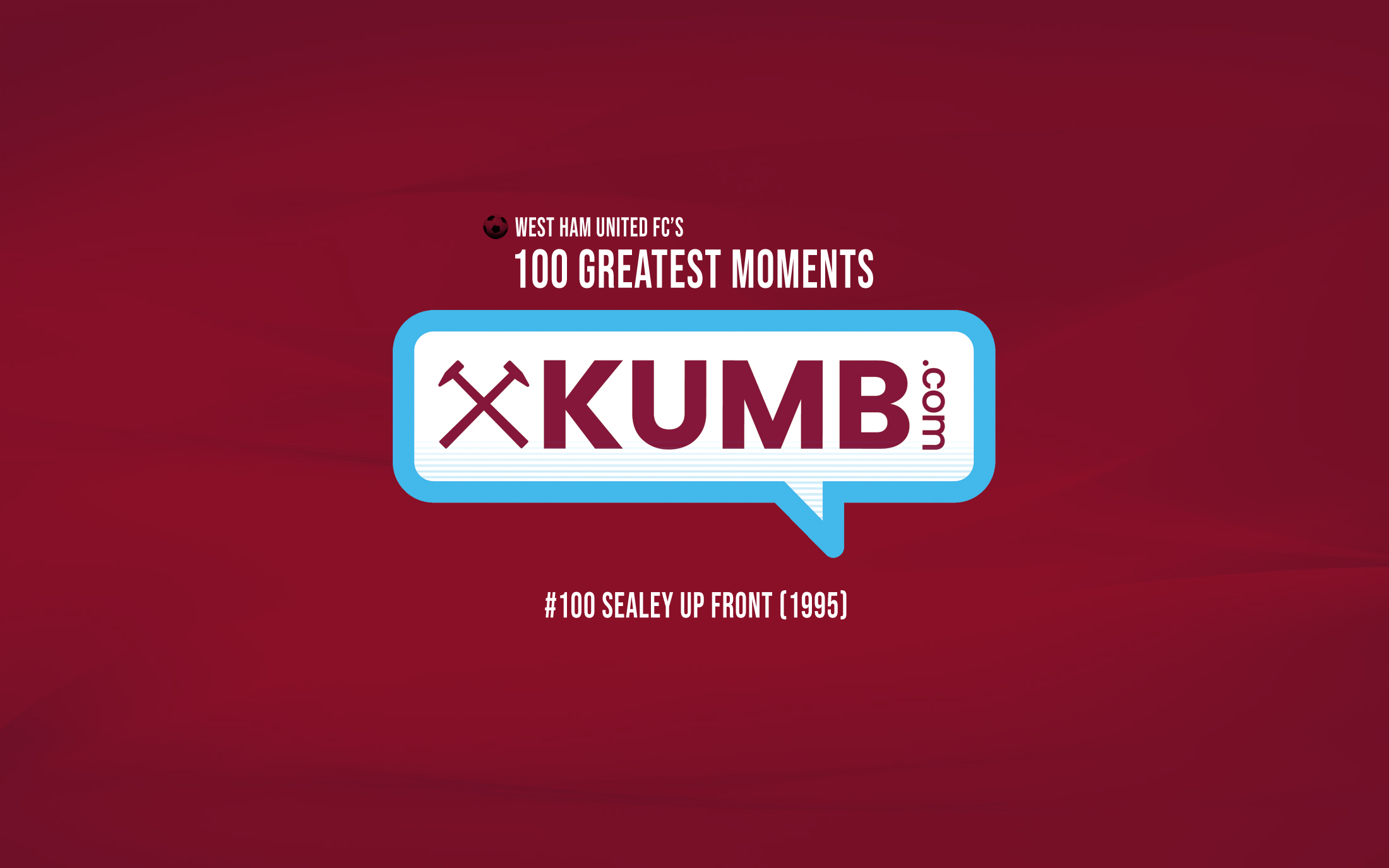 Harry Redknapp was fond of using the phrase 'bare bones' during his tenure - but for once he had a reasonably legitimate claim back in September 1995 when West Ham travelled across town to face Arsenal at Highbury.

Having had Julian Dicks sent off for a second bookable offence ten minutes into the second half and seen the Irons fall behind to a 75th-minute Ian Wright penalty (his second of the game) Redknapp turned to his bench - and saw only goalkeeper Les Sealey grinning back at him, having already used two of his three available substitutes.

Whilst the late Sealey's uncle Alan may have scored the goals that landed West Ham the Cup Winners Cup in 1965, Les' own experience of playing up front was ... well, nil. Yet this didn't prevent Redknapp from slinging him on up front as an 83rd-minute replacement for John Moncur, who is almost certainly West Ham's only outfield player to have been substituted for a goalkeeper. 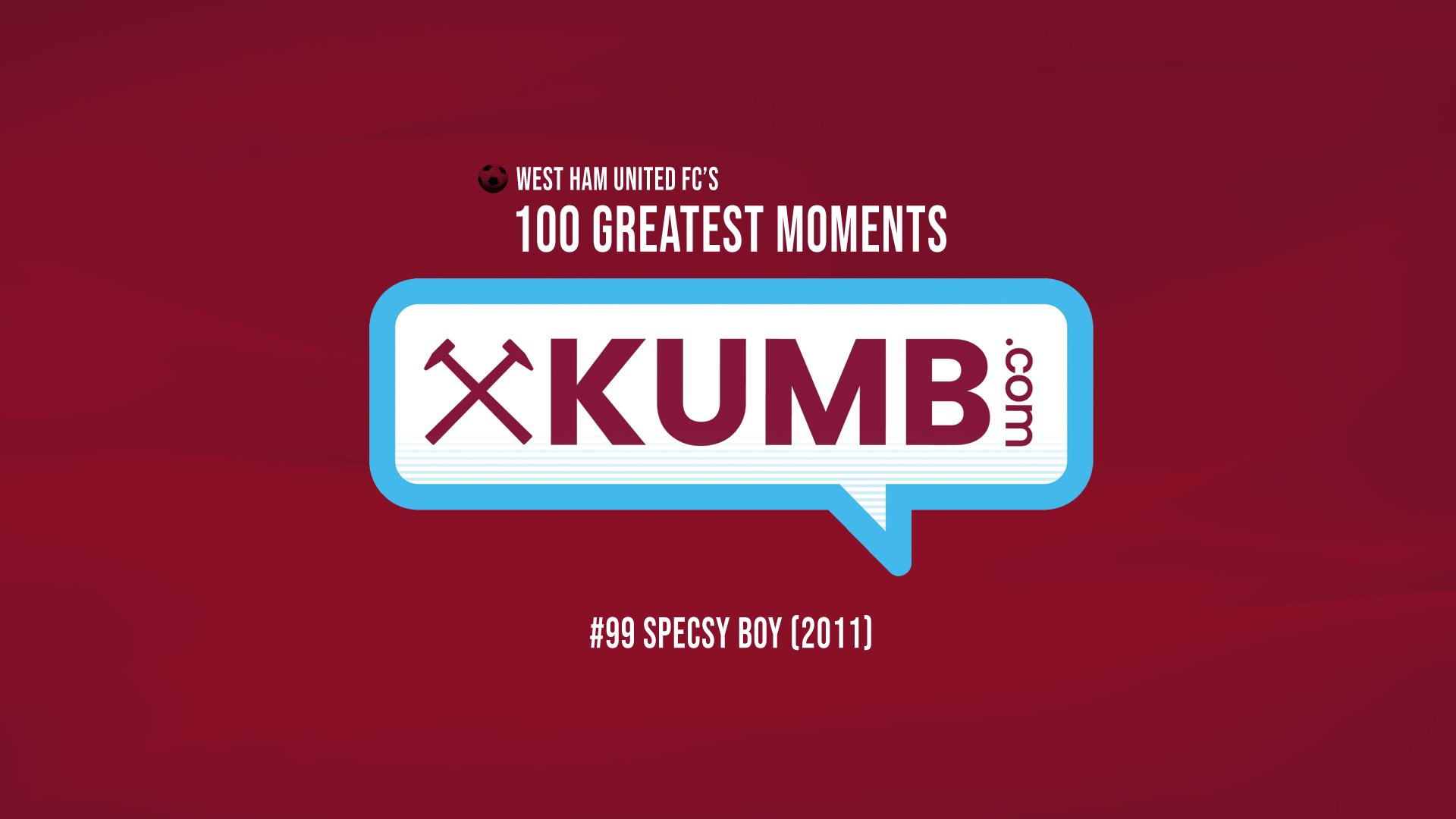 It can never be said that Jonathan Spector had an easy time of it at West Ham. Constantly overlooked by a succession of managers - and to his considerable credit - the American international never complained (publicly, at least) choosing instead to get on with his job.

Yet it is said that every dog has his day - and Spector was finally rewarded for his patience in November 2010 when, due to a number of injuries, he was selected to start against eventual league champions Manchester United in a Carling Cup quarter final tie.

With the Irons having been granted home advantage - and snow swirling around the ground on a bitterly cold, wintry night - Spector took to his former club like a man possessed. Fifteen minutes in and a first effort was ruled out for offside. Unphased, the midfielder continued as he had begun and put his team 1-0 up on 22 minutes with a diving header - as rare a thing as you will ever see.

However that wasn't enough for Scott Parker's stand in and he duly added a second 15 minutes later, before two second half goals from Carlton Cole sealed West Ham's first four-goal haul against the Mancunians since May 1977. 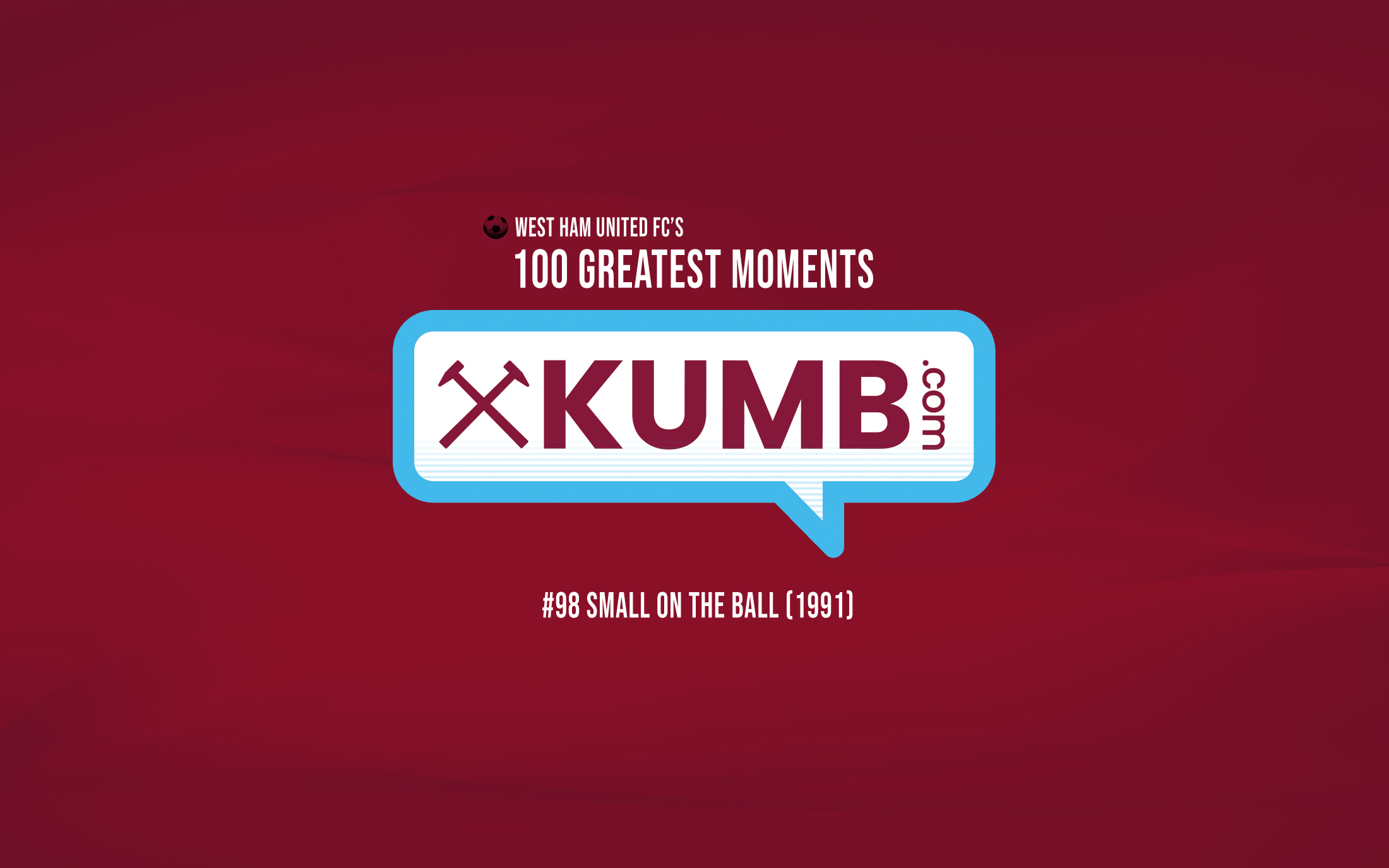 It's quite possible that West Ham's north London rivals Arsenal crop up on this list more than any other club. Billy Bonds' West Ham travelled to Highbury as massive underdogs on 2 November 1991 - no surprise as the Gunners were reigning league champions whereas United were in their first season back in the top flight having been promoted from (the old) Division Two.

Arsenal, facing a midweek European tie with Benfica decided to rest a number of players including England captain Tony Adams - and it showed, as they looked well off the pace. With sixteen minutes of normal time remaining, Mike Small - a Â£400,000 summer signing from Brighton - picked up the ball on the edge of the Arsenal penalty area as West Ham countered.

From some 20 yards, Small took aim, let one go and sent an absolute scorcher beyond David Seaman to record the Hammers' second away win of the campaign and stun the home fans at Highbury once again. 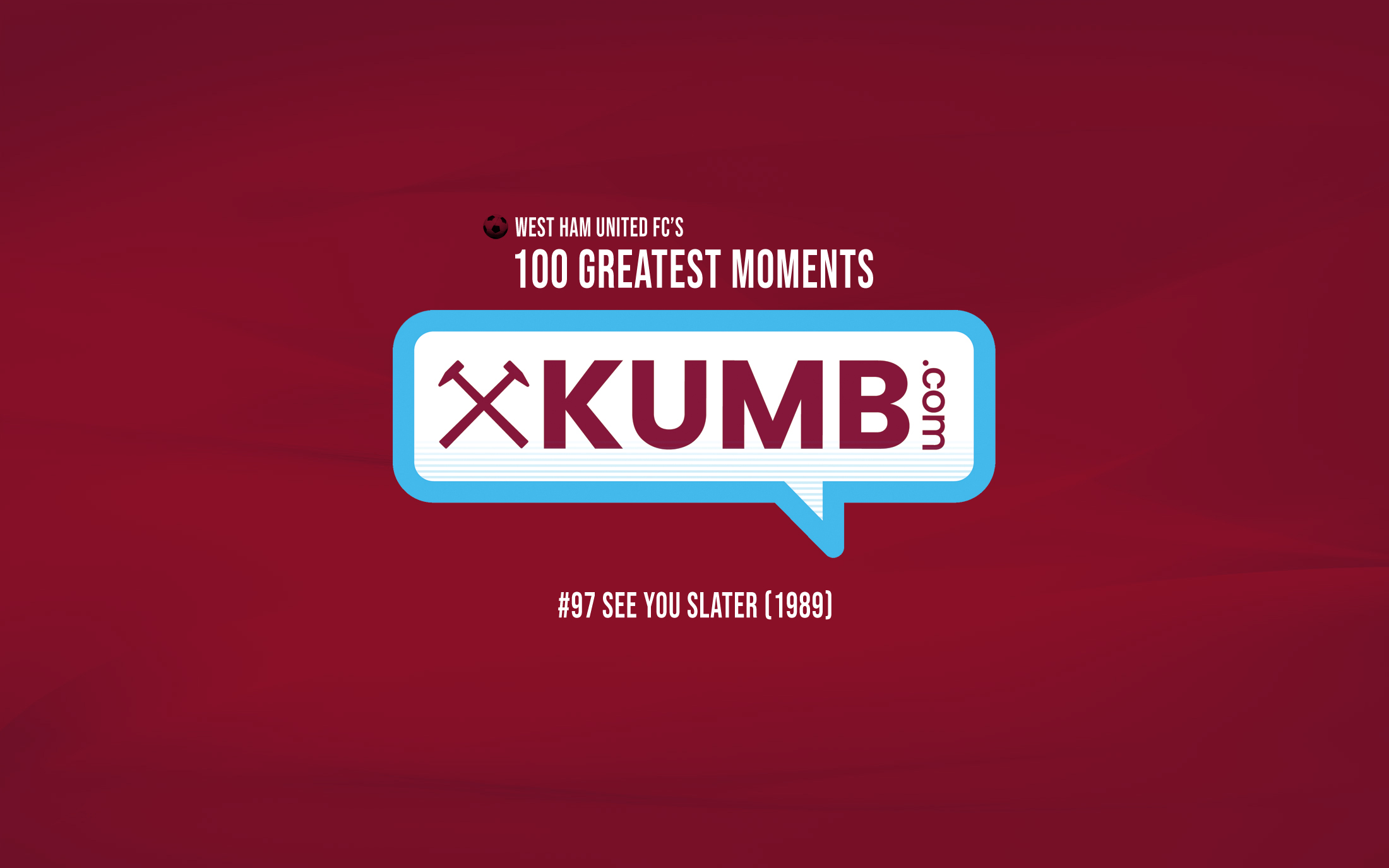 Billy Bonds hadn't enjoyed the best of starts to his managerial spell, although his team still went into this game eighth in Division Two despite having lost two of their previous three games. However it was to be a night of joy for the sparse 21,000 crowd - who also got to see West Ham score a quite wonderful and unique goal.

With West Ham already 1-0 up, Phil Parkes' long punt was nodded on to Stuart Slater. The youngster controlled the ball with his chest on the edge of Sunderland's penalty box before firing a fierce volley over the head of a helpless Carter in goal. The fact that it hit the net having not touched the ground, from one end of the field to the other, made it a particularly unique goal. 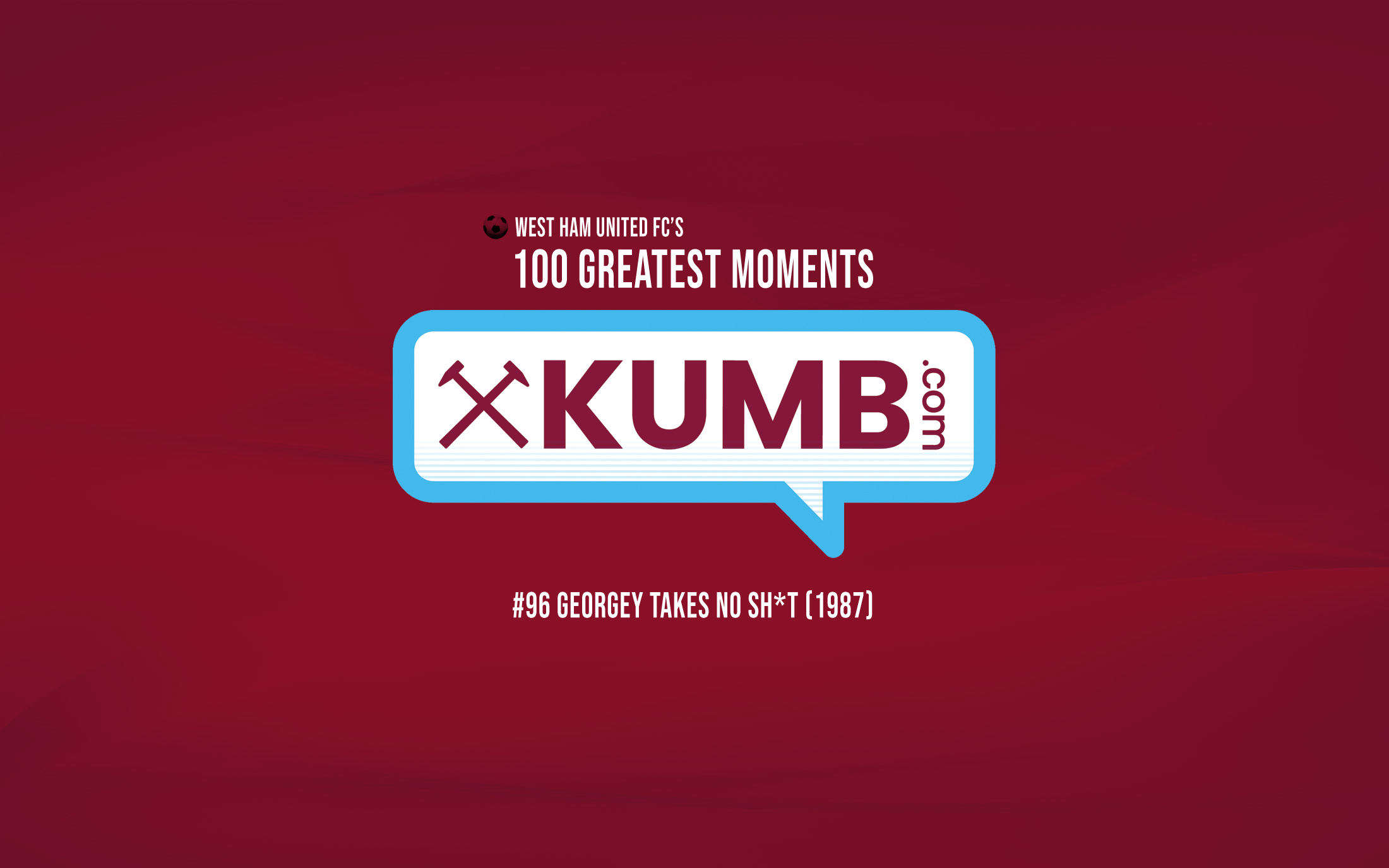 West Ham, struggling to recreate the form of the previous season went into this Today League Division One fixture with Watford just four places above the relegation zone and with only ten games of the season remaining. With games against Arsenal, Everton and Man Utd to follow, a win was essential in order to give themselves a little breathing space.

However with the game entering the last minute - and with neither side yet to score - a point appeared the likely outcome.

Regular left-back George Parris had been moved into midfield by John Lyall to allow for the debut of Scottish full-back Tommy McQueen. As the ball went out of play towards the end of the game, Parris asked referee Ian Borrett - who famously responded to a complaint by former Crystal Palace manager Alan Smith with 'I'm having a crap game and nothing you say will change it' - how long was left, to which the official replied: 'a minute'.

Fuelled by this freshly-acquired knowledge, Parris picked up the ball 30 yards from goal, took aim and fired - sending the ball into Tony Coton's top corner to win the game, West Ham's first win since New Year's Day and one that inspired them to a 3-1 victory over Arsenal 10 days later. 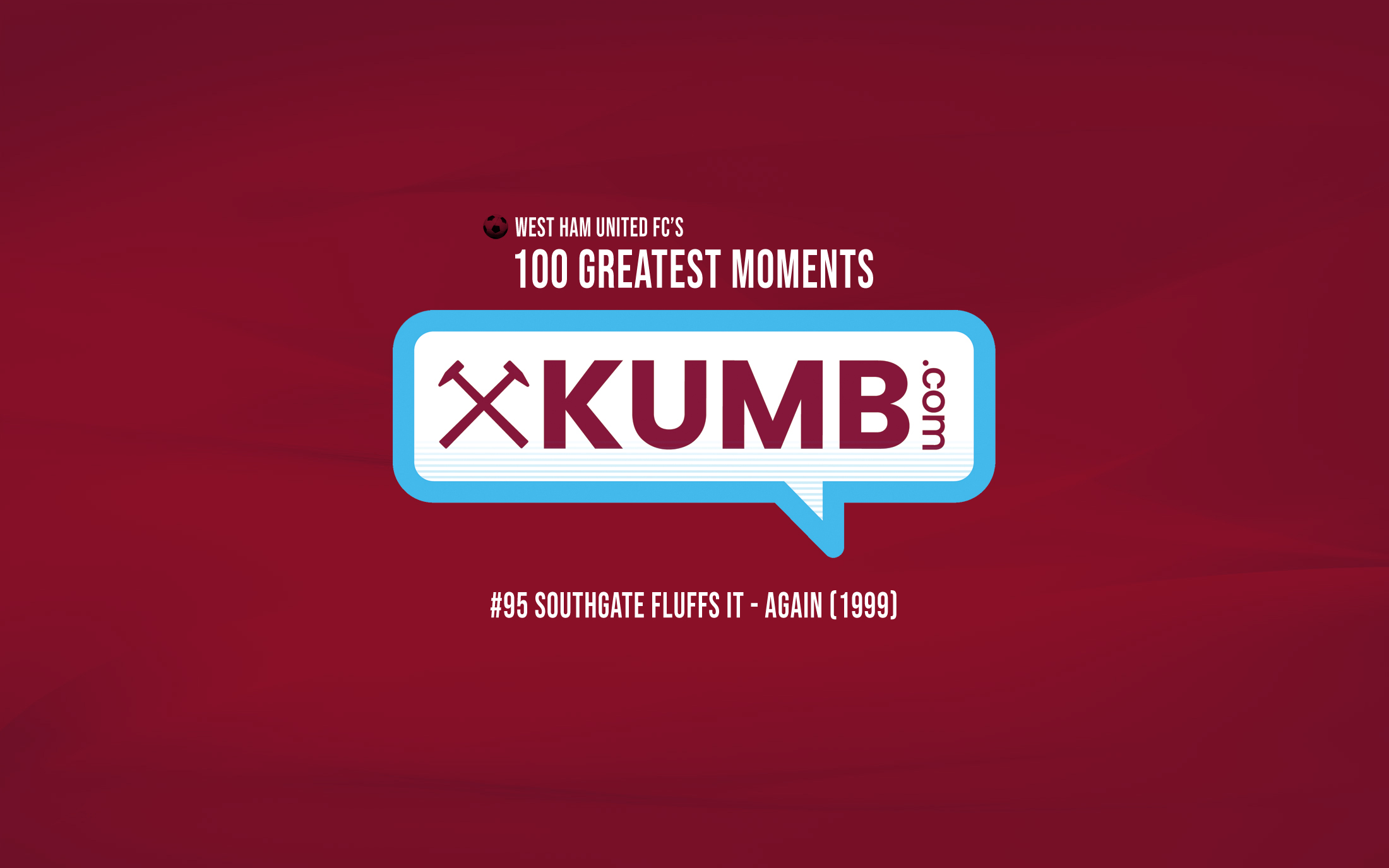 West Ham enjoyed a good year in the domestic c e 1999/2000 season reaching the quarter finals of both. They were to win this last eight encounter too, only to be forced to reply the match after it was revealed substitute Manny Omoyinmi - who played the final eight minutes of extra time as a late sub - had played in an earlier round of the competition for Gillingham, with whom he spent time on loan.

The initial tie had been a real humdinger, with a strong Villa side taking the lead twice before being pegged back by goals from Lampard and Di Canio, the latter in the 90th minute from the penalty spot after Paul Kitson fell over in the box. Extra time failed to produce a winner and thus the game went to penalties.

At the time it was only three years since Gareth Southgate's missed penalty had sent England tumbling out of Euro '96. With that still fresh in the minds of those at Upton Park that night, the announcement of Southgate's name was hilariously received by thunderous applause and mocking cheers from the home fans.

A clearly flustered Southgate duly missed the resulting spot kick - as everyone guessed he would - and West Ham were through to the semi finals of the Worthington Cup. Except they weren't, as Villa predictably won the re-staged match.

Known as a gentleman on the pitch, Liam Brady's response to this match-winning goal against former employers Arsenal went against the grain.

With West Ham leading 2-1 courtesy of a Tony Cottee brace in a game marred by crowd trouble - so much so that at one point the players had to be led from the pitch by referee Dennis Hedges - the ageing (yet still supremely talented) Irishman put the game to bed with a goal as good as any he scored throughout a long and thoroughly successful career.

Collecting the ball just inside West Ham's half, Brady surged towards the Arsenal goal before curling a wicked effort beyond 'keeper Rhys Wilmot. The Boleyn went crazy and Brady, who has been teased all night from the away end celebrated by 'gesturing' towards the Arsenal fans - an impetuous and uncharacteristic response that resulted in the Irishman being booked by an eagle-eyed Mr Hedges - before celebrating wildly with the home fans in the West Stand. 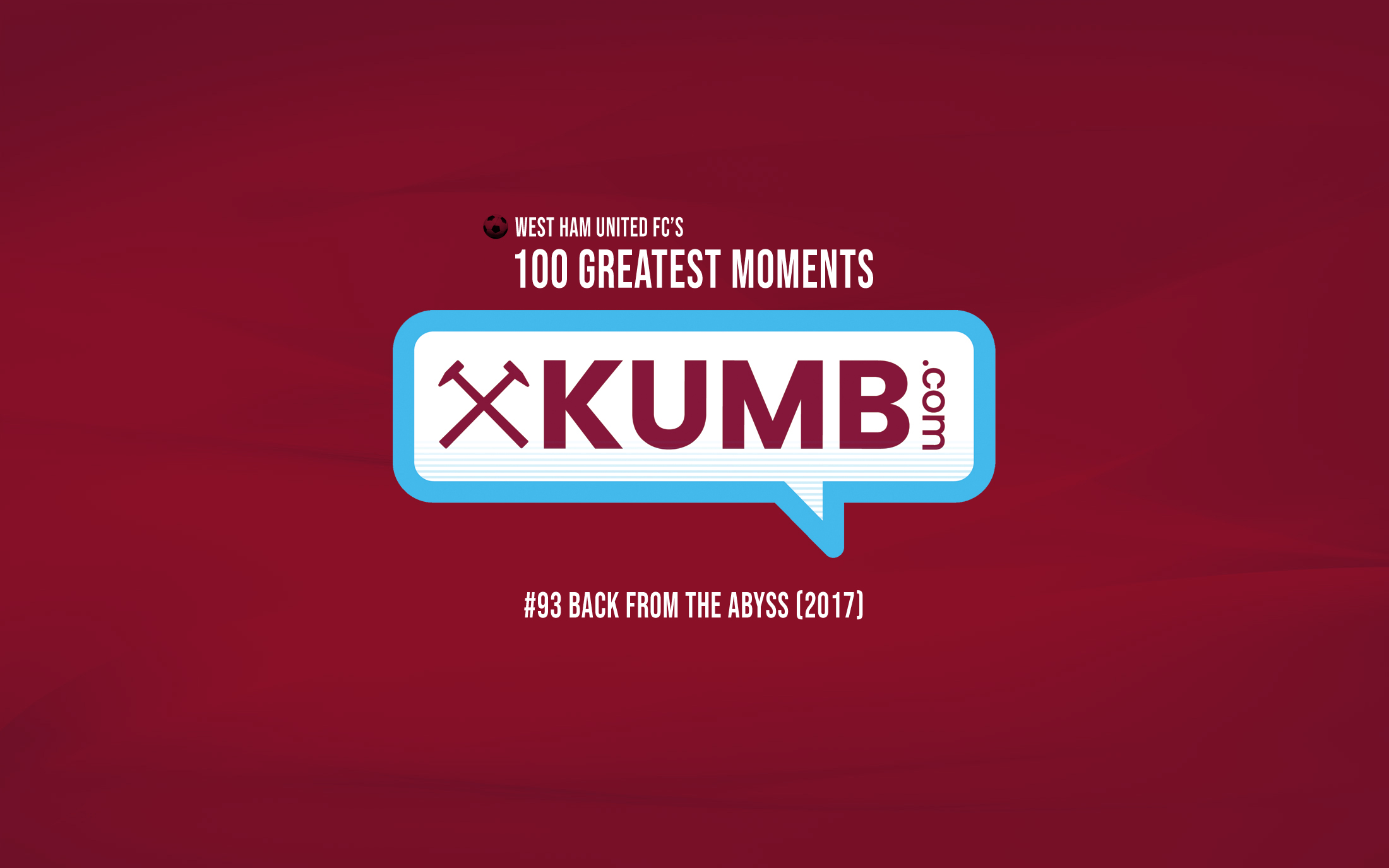 It looked to all intents and purposes like Slaven Bilic's West Ham were slipping to a routine defeat against Tottenham at their temporary Wembley home when goals from Moussa Sissoko and a deflected effort from Dele Alli put the north London side 2-0 up at half time in this Carabao Cup tie.

However a spirited fightback from the Hammers saw Andre Ayew halve the deficit with a toepoke before he steered home an equaliser four minutes later, to the de travelling Hammers fans.

Unsurprisingly Tottenham pushed forward in search of a third, having been stung into action and Adrian was on hand to make a couple of fine saves before West Ham won a corner - which Angelo Ogbonna nodded into the far post to give West Ham a priceless win that was welcomed at the final whistle by a shrug of the shoulders from a delighted, yet utterly perplexed, Bilic. 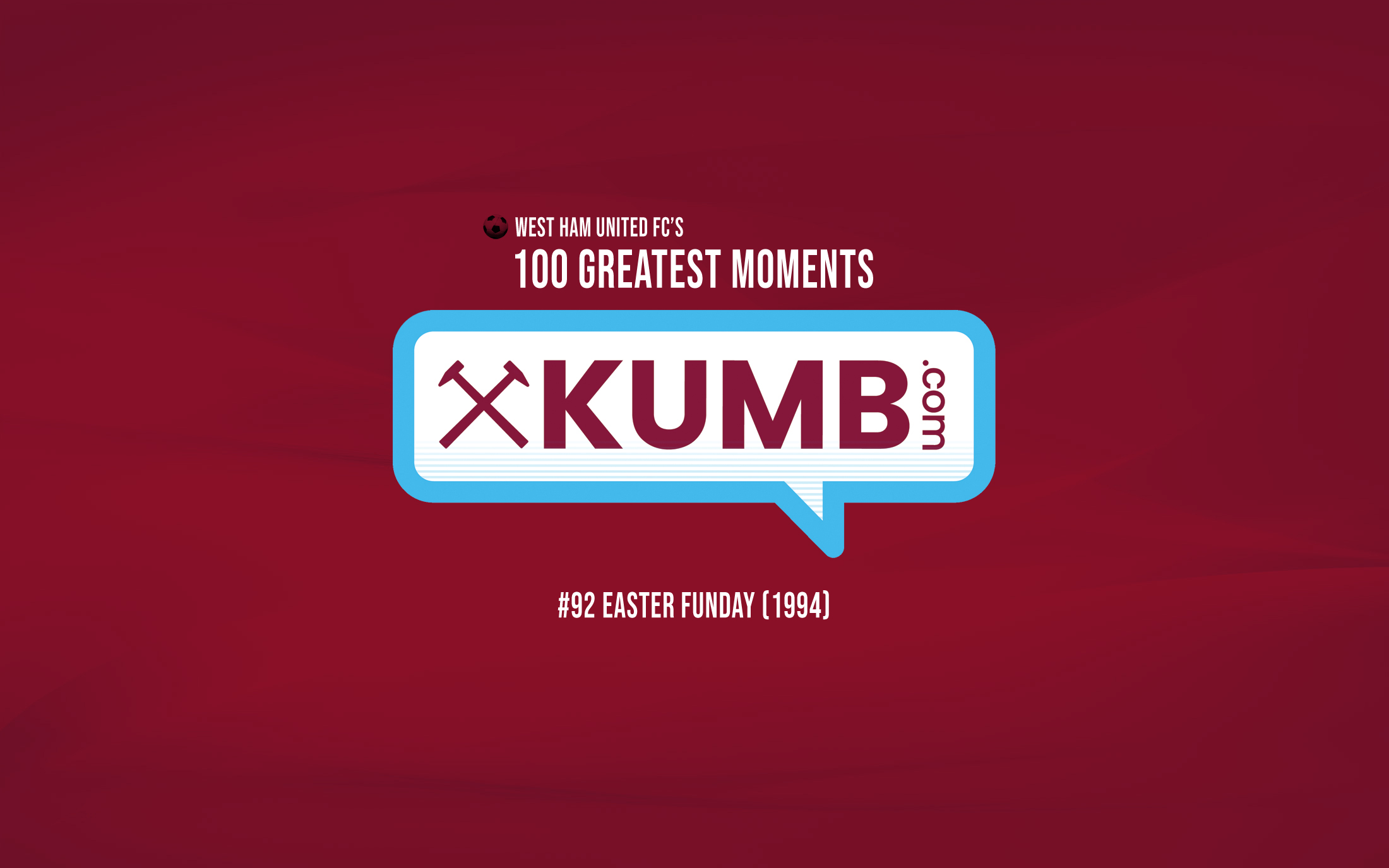 It had been more than 12 years since David Cross' virtuoso performance had single-handedly destroyed Spurs at White Hart Lane - and ten since the Hammers had won there full stop. Fortunately for Billy Bonds' side, Spurs had won just three of their previous 18 leading up to this Easter weekend clash, and none since the previous October. West Ham's form, erratic as is often the case, meant that anything could happen.

The caravan-dwelling Steve Jones gave the Hammers a 37th-minute lead before Trevor Morley made it 2-0 from the penalty spot with an hour played. Teddy Sheringham's 66th-minute effort for Spurs lifted the home crowd temporarily before Morley grabbed a second with 72 played.

As Tottenham fans began draining out of the ground - long before the days of chants like 'we can see you sneaking out' and 'is there a fire drill?' - Mike Marsh added a fourth to complete a thoroughly comprehensive win for West Ham at the old White Hart Lane. 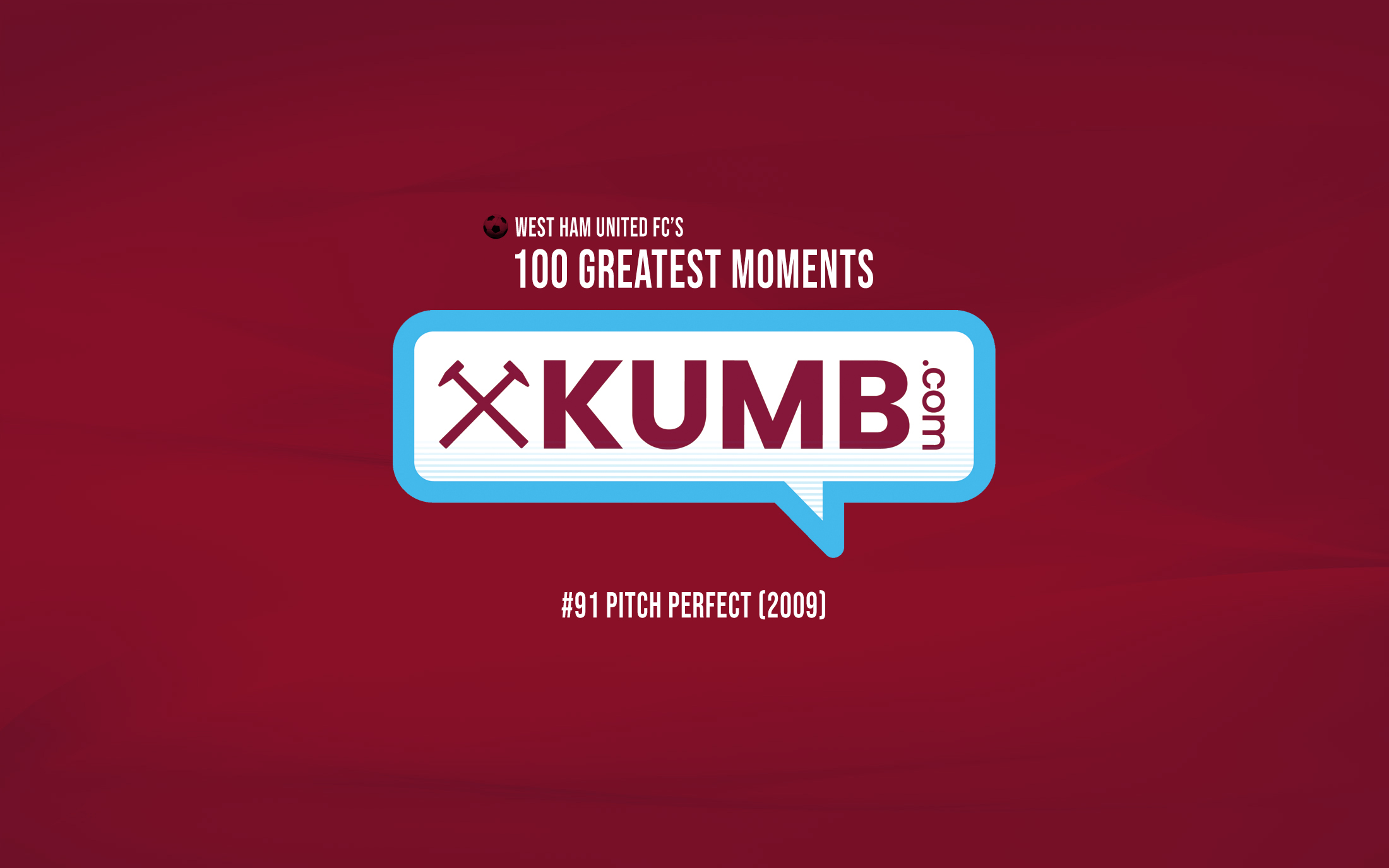 Technically one of the best West Ham goals have ever scored at the highest level, Carlton Cole's tempered strike that secured a 1-0 win at Wigan back in 2009 came as the result of a fluid passing move which began in United's own half.

After possession had been won by James Tomkins with an aerial challenge, seven of the eight passes that ensued required just a single-touch; only Scott Parker took a second as he weighed up his options. Noble and Di Michele's one-two created the necessary space for Cole to uncharacteristically show great aplomb by picking his spot and stroking the ball into the far corner of Chris Kirkland's net.

Hours spent on the training ground at Chadwell Heath had finally paid off for manager Gianfranco Zola, who watched on nonchalantly as his team celebrated their pitch perfect team goal.