Happy birthday Sir Geoff: the legend we gave to England

There are heroes and legends - and then there is Sir Geoff Hurst. West Ham Unitedâs greatest living goalscorer, the player we gave to the nation, is 80 this week.

In some ways we actually lost him to the nation, his World Cup winning hat-trick in 1966 at Wembley supersedes anything he achieved for us. We will no doubt see those goals again, hear the famous "some people are on the pitch, they think itâs all over, it is now!" commentary by Kenneth Wolstenholme, as England continues to wonder whether Hurstâs record will ever be beaten.

But what you are seeing is inevitably Englandâs Geoff Hurst, the player who might not even have got into that England squad had fellow Hammer Johnny Byrne not been injured. Because it was Byrne who was in Alf Ramseyâs provisional squad and Hurst didnât make his international debut until February â66.

It even took an injury to Jimmy Greaves during the World Cup tournament for Hurst to get, and grab with stunning assurance, that place in England history. For his country he scored 24 in 49 matches, his last international being in 1972 against West Germany.

Now of course he is an England hero, a legend, an icon. Sadly he's one of only three players left still with us from that World Cup winning side; the others are George Cohen (82) and Sir Bobby Charlton (84).

In fact there are only three other members of Ramseyâs 22-man squad still with us: Terry Payne (82), Ian Callaghan (79) and George Eastham (85). Sadly several of that squad have passed away in recent months - Ron Flowers, Roger Hunt, Nobby Stiles and Greaves, plus our own Martin Peters in December 2019. We mourn them all, heroes all.

For people of my generation, who saw these great players in the flesh, it is a sobering time. And it's why we should cherish Sir Geoff, still sprightly and with a new book out, a fine target man who I watched throughout his West Ham career.

It is West Hamâs Geoff Hurst, not Englandâs, that we should honour today. To my mind, the first modern target man whose career was reinvented by Ron Greenwood, who turned an ordinary wing half - given his West Ham debut by Ted Fenton - into a striker who became a worldwide star.

Itâs fair to say that you have to be 50 plus to have seen Hurst in a West Ham shirt. Different, younger generations have their own heroes. The lads I go to matches with will argue for Paolo Di Canio, Frank McAvennie, Trevor Brooking, Billy Bonds or even our own Mark Noble. All worthy legends.

But they never saw the âWest Hamâ Geoff Hurst. Only Vic Watson, with 326 goals in 505 matches between 1921-35 stands ahead of Hurst as our greatest ever goalscorer. It was a different game then, of course, with different rules regarding goalkeepers and offsides, but that cannot devalue Watsonâs record.

Yet Hurstâs contribution to West Hamâs history is arguably greater. An FA Cup final win, in which he scored, a European Cup Winnersâ Cup final triumph, a League Cup final appearance and a European semi-final, are testimony to that legacy.

As I said, heroes are relative. Mine start with the 1958 promotion side of whom Ken Brown (87) and Bill Lansdowne (85) are still with us. Ernie Gregory and John Dick from that team were my first heroes, as a primary school boy.

But it was Hurstâs sides of â64 and â65 that are unsurpassed for me. Of those two sides it is gratifying to see so many still going strong. Jim Standen (86), Brown, Jack Burkett (79), Ronnie Boyce (78), Eddie Bovington (80), Hurst, John Sissons (76), Brian Dear (78) and Joe Kirkup (81). These guys gave my generation the greatest years of our footballing lives.

Looking back through Hurstâs career, one amazing spell in 1966 and a remarkable four season partnership with Byrne sums it all up. Between 1963 and 1967, Hurst and Byrne scored 223 goals between them.

Byrne hit 96 and Hurst 127. Twice in those four seasons Hurst topped 40 goals in a campaign. Now this is no disrespect to Michail Antonio, but our current front man has just been hailed as our top scorer in the Premier League era with 52 in 170 games. Now you can see, maybe, where I am coming from.

There was one sensational spell of 11 games in 53 days that saw West Ham score 42 goals, with Hurst netting 16. It started on 5 November 1966 with a 6-1 win over Fulham, Hurst scoring four. Three days later Leeds were beaten 7-0 in the League Cup and Hurst hit a hat-trick.

The goals kept flying in. 4-1 against Spurs, 3-0 against Newcastle, 3-1 against Blackpool. There was the famous 5-5 draw at Chelsea, and a couple of fours in two games with Blackpool. That 53-day run was probably the pinnacle of Greenwoodâs era.

Hurst was virtually unplayable and any of us who witnessed those games know just how amazing West Ham were in that spell. I hear now, in particular after the victory over European champions Chelsea, how the current side could be the club's best ever.

Itâs a tough call, an almost impossible argument because of the fitness levels, technical back-up and the money and strength of the Premier League.

Certainly David Moyesâ side is our best in the Premier League era, but I wonder how they would fare against the Moore, Hurst and Peters side of the '60s? We will never know, itâs the ultimate impossible dream.

But in true West Ham tradition, that '66 side I adored finished 16th that season, lost seven on the trot and won only one of the final 10. Manchester United won the title at Upton Park that season, winning 6-1 to lift the crown.

But thatâs West Ham United. If there is such a thing as the West Ham way, that season encapsulated it. When we were good we were very very good, but when we were bad? We were terrifyingly bad.

The shining lights for us at the time were Moore, Hurst and Peters. They were magical days, featuring wonderful games and a goalscorer supreme in Hurst. Thanks for the memories Sir Geoff, happy birthday and many more of them. To a true hero and legend. 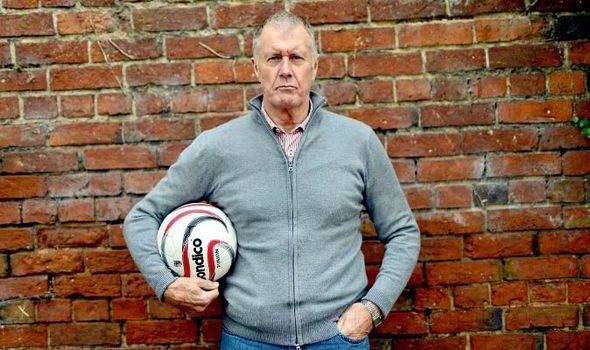 Running into a red wall