In this article I will review the West Ham United squad utilising Data via WyScout to provide an objective assessment of the squad performance over the period of 2021/2022 season to date (30th December). The objective is to review the current West Ham United first team via the data along with subjective scouting observations and make recommendations on their potential future at the Club. 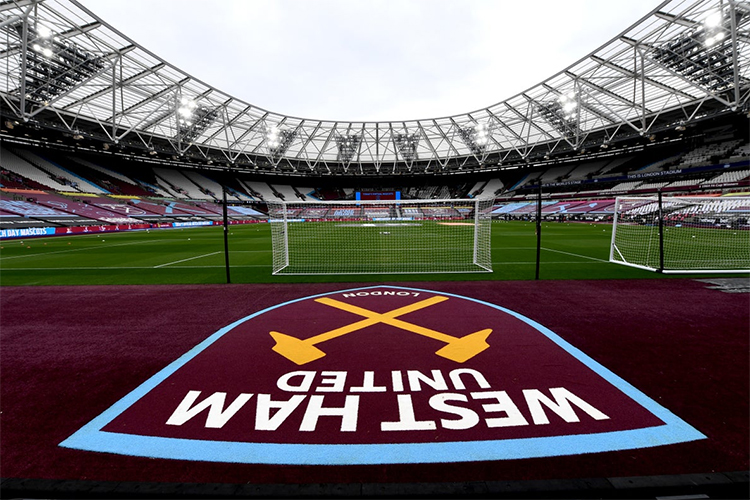 Based on the review of the current squad the document shall look to provide an overview of possible targets, highlighting those players who are viewed as realistic targets for West Ham United's transfer budget and wage structure. All players part of the percentile review against West Ham United players have all played a minimum of 800 minutes this season in their respective leagues across Europeâs top five divisions.

Note: This document was inspired by the work of Liam Henshaw (@HenshawAnalysis) and Chris Kearney (@AnalyticsForest). If you have the time please review the brilliant work they did in the Nottingham Forest Recruitment Plan Summer 2021.

West Ham United have a squad reaching their later peak years and a number of experienced players coming into their final year or two of their contracts. This window there is the opportunity to reduce the average age of the squad, setting long term options within the squad across areas which lack quality in depth.

West Ham United are at a pivotal point in the season competing in both domestic and continental competitions, with the necessity to improve the quality and strength in depth. There is a guaranteed departure for over a month with Said Benrahma representing Algeria at the AFCON competition and will require a review of the market as to possible backup which can be brought in to supplement his departure whilst adding competition to those remaining.

There are long term injuries currently to Angelo Ogbonna (out for the season) and Aaron Cresswell (no return date) resulting in a recruitment focus to find a ball playing left sided centre back and a progressive left back able to operate in both a three and four-man defence. left back has an additional focus with Arthur Masuaku likely available for transfer, should an acceptable fee be submitted to the club.

With the impending retirement of Mark Noble plus insecurity and questions around effectiveness of Alex Kral (loan), a potential need for a strong, defensively-sound centre midfielder comfortable in possession is an additional area of focus in the event of loan termination.

Note: Data only includes players who have played >800 mins at LB | All data is per 90 mins | Data is via WyScout | Valuations via CIES Football Observatory

West Ham United currently have Ben Johnson playing on his weaker side to supplement the loss of Aaron Cresswell to a long term injury. The current recognised left back Arthur Masuaku is potential available this window and there are concerns on his mental application which impacts the solidity of the defence on the left. The desire is to find a progressive ball playing left back who is defensively sound and can provide a long term option or short term loan.

*Note: Players selected as targets outside the top five European leagues (or UK where English Championship players are identified) have an additional median line set at 20% above the standard average for those competing in the top divisions. This 20% is to compensate for the leagues they feature in being of a lesser competition reputation and quality. 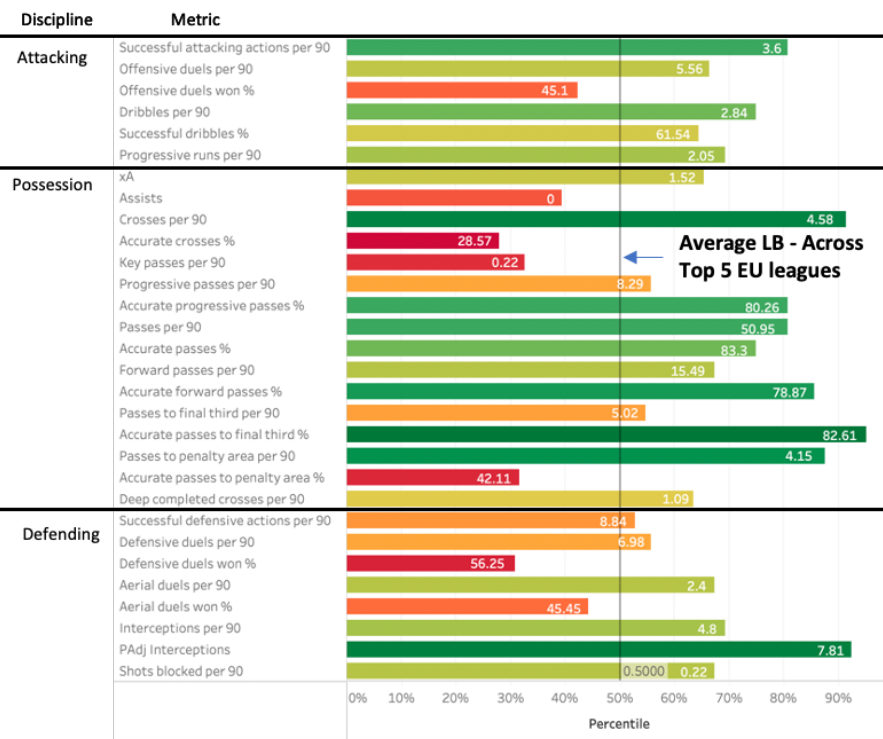 â¢ Strong defender with above average metric across the board

Lucas Digne is an experienced left back with Premier League experience which can enable a quicker transition into the first team as well as statistical upgrade defensively and in attack on Aaron Cresswell. Digne has been playing in a more pragmatic left back role than in previous seasons which has resulted in less key passes, but given more freedom he can be a creative outlet from the left hand side and exploit the spaces created by the inverted wingers West
Ham United employ. 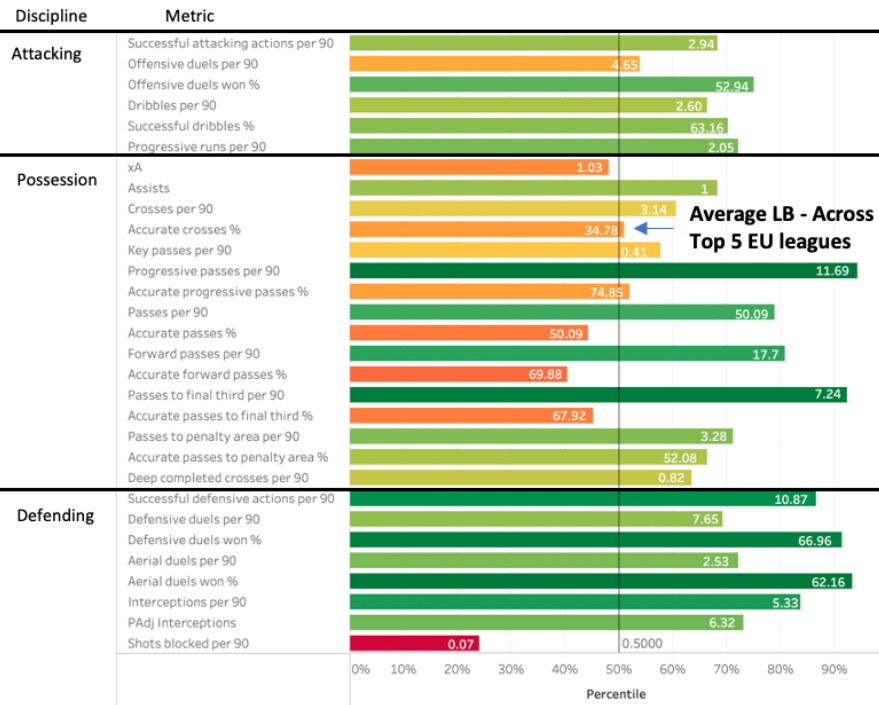 â¢ Comfortable in possession, a progressive passer and dribbler of the ball

â¢ Strong defender with above average metric across the board

â¢ Performing above average in attack across all attacking metrics

â¢ Can be suspectable to losing the aerial duel at the back post, although his aerial ability has improved statistically

Anthony Caci is an athletic full back who is capable of providing a challenge to Aaron Cresswell for the starting berth at left back and becoming a long term option on either flank for West Ham United. Defensively a very solid player although statically strong at aerial duels he has been beaten at the back post this defending deliveries. Provides consistent support to the attacking unit with good quality crosses and above average key passes per 90 (0.41). 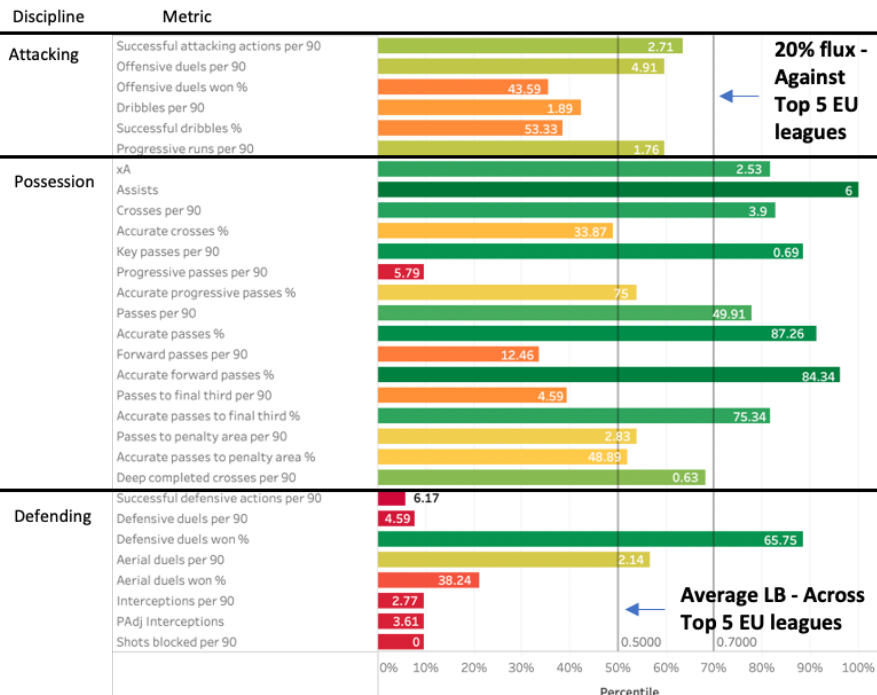 â¢ Good composure against the opposition press to retain possession

â¢ League competition isnât as strong as the Premier League. Although, Wijndal is a full Dutch International

â¢ Aerially, he can struggle in duels which could be exploited in a more physical league such as the Premier League

â¢ Defensive metrics are well below average lines, although this can be explained due to tactical system encouraging a more passive defensive style

Owen Wijndel is a young but experienced left back with 122 first team appearances for AK Alkmaar where his leadership qualities has seen him named captain this season. Wijndal is a well rounded left back who could provide a long term development option for West Ham United to phase in as Cresswell reaches the end of his contract (30.06. 23) and provide immediate cover now whilst ruled out due to injury. The one consideration is the step up to the more physical Premier League and potentially require time to adjust. 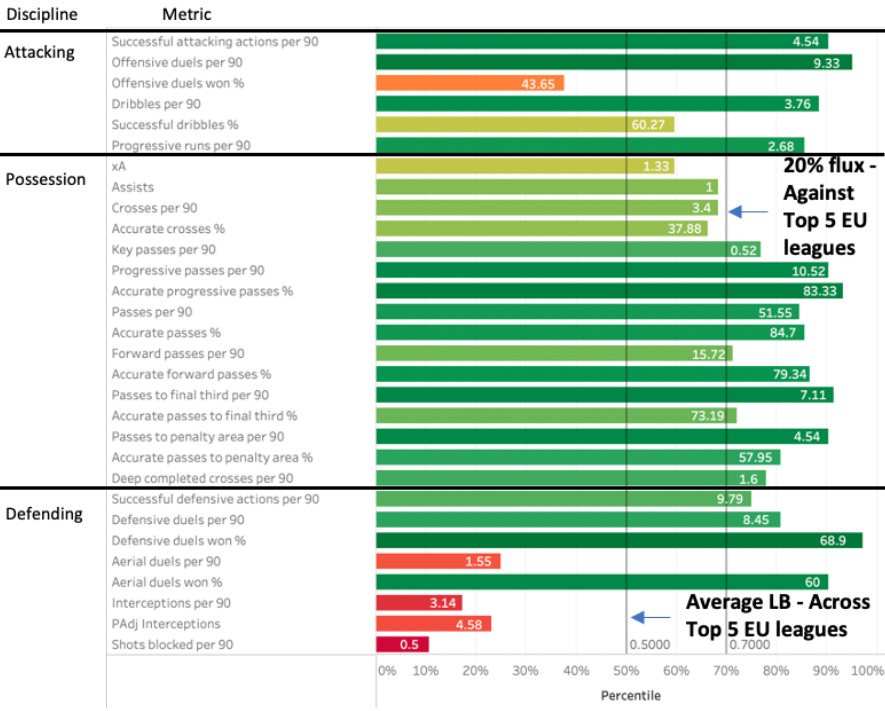 â¢ League competition isnât as strong as the Premier League

Young Malacia has already amassed 116 first team appearances for Feyenoord and full internationals with The Netherlands. Malacia is a standout performer in the Eredivisie performing to a very consistent high standard. He appears ready for a move to a higher standard of league and possess experience in continental competition with Feyenoord which could be off benefit to West Ham United. A high mobile and aggressive modern left back who could be the long term answer to the position with potentially to improve even further.

West Ham United currently have Angelo Ogbonna out for the remainder of the season with a ruptured cruciate ligament. This has left a void in the defence on the left side and has seen Kurt Zouma moved across to his weaker side to fill the gap until his injury (return date approx. February). With the club looking to recycle possession and build from the back itâs important to find a natural left-sided, ball playing centre back, with a solid set of defensive metrics, with aerial prowess to defend the area and pose a goal threat at attacking set pieces.

*Note: Players selected as targets outside the Top 5 European leagues (or UK where English Championship players are identified) have an additional median line set at 20% above the standard average for those competing in the top divisions. This 20% is to compensate for the leagues they feature in being of a lesser competition reputation and quality. 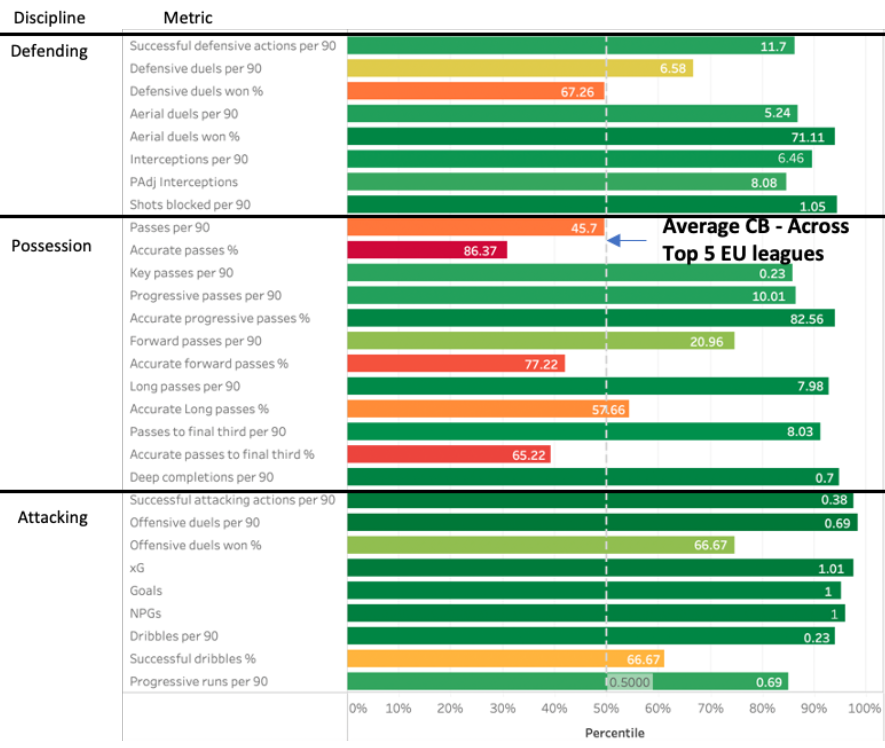 â¢ Strong in his defensive duels

â¢ Good reading of the game with a >80th percentile metric against Interceptions, Padj Interceptions and shots blocked per 90.

â¢ Only 18 months left of his current deal

â¢ Can over commit in the tackle resulting in 1.2 fouls per 90

Nico Schlotterbeck could be a very strong addition to the West Ham United squad with his ability to progress play either through dribbling or utilising his wide passing range. Physically Schlotterbeck is well suited to the Premier League and at 6â3 is dominant dealing with aerial challenges whilst posing a goal threat in the opposition area at set pieces. Whilst his accuracy metric for passing may fail below the average he performs consistently high against the West Ham United defenders. 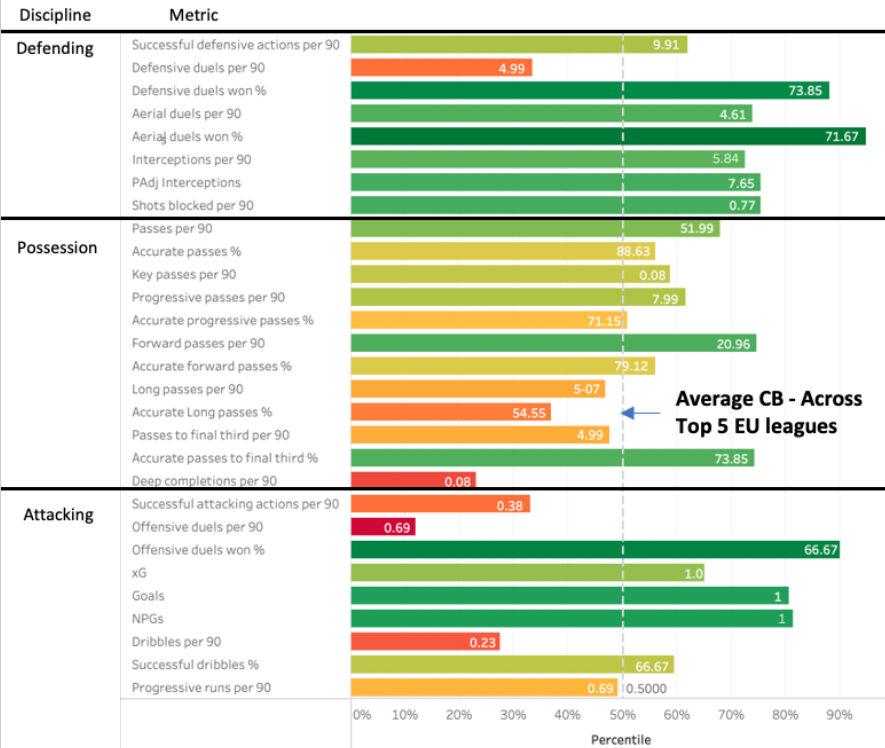 â¢ Lille financial issues could encourage them to sell this window

Sven Botman is continuing his good form from his first season at Lille where they won the Ligue 1 title. However, Botman is potentially available this winter window for a reasonable fee due to the financial insecurity facing Lille. Botmanâs size and build is well suited to the Premier League enabling him to manage the demands of the league. In possession he is assured and calm looking to recycle possession to retain the ball although, should the right opportunity arise he will utilise his passing to play progressive passes through the opposition. 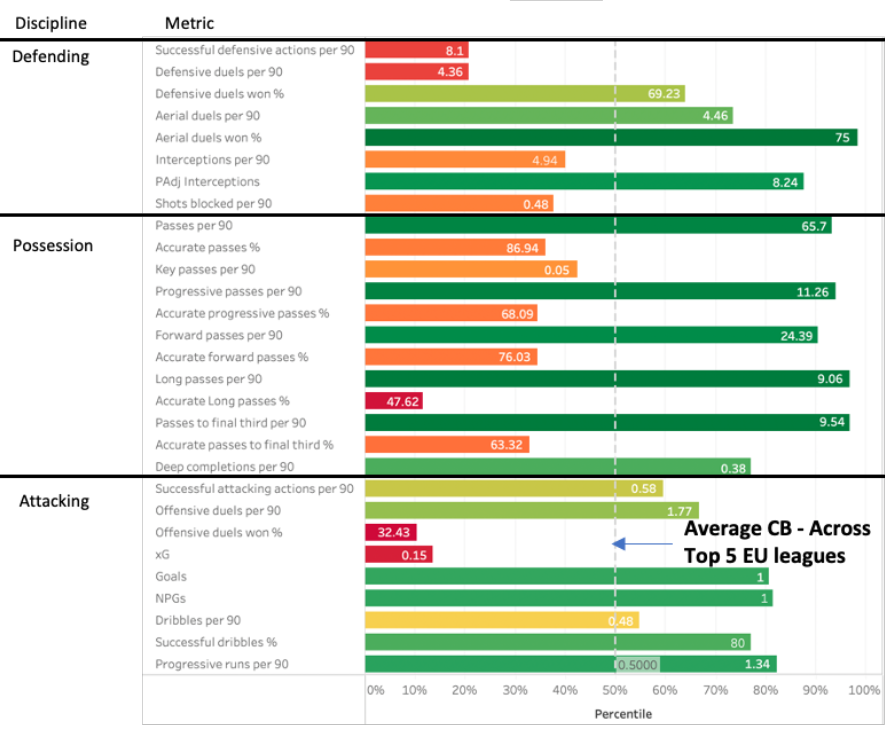 â¢ Bournemouth are chasing promotion to the Premier League

â¢ Steve Cook has been sold to Nottingham Forest

Lloyd Kelly is a confident and composed defender who would provide West Ham United cover in two positions but also provide additional flexibility in game to play as a left-sided centre back in either a three or four man defence. His technical ability ensures he is comfortable on the ball allowing the option to bring the ball out from defence to engage the opposition and create overloads centrally. With Bournemouth chasing promoting and recently selling Steve Cook a deal could prove difficult for Kelly this January. 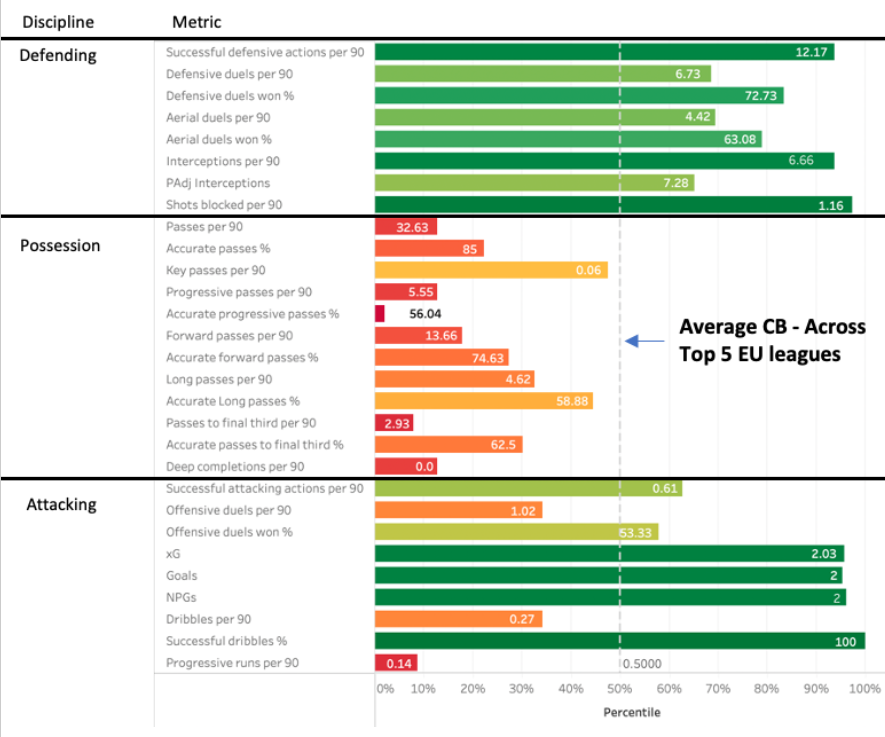 â¢ Passing accuracy is below average across the top four leagues

â¢ Not very progressive in his passing

Reece Oxford has developed both physically and mentally since his departure from West Ham Untied at the start of the 2018/19 season. Whilst Oxford is right footed he is comfortable with his left and plays at one the left side of central defence for FC Augsburg. He could struggle should he be used to progress play and although his passing is the top five Eueropean league average his completion rate of 85% can be improved upon within a team of higher quality. Defensively he is commanding and is above average across the board on the defence metrics. 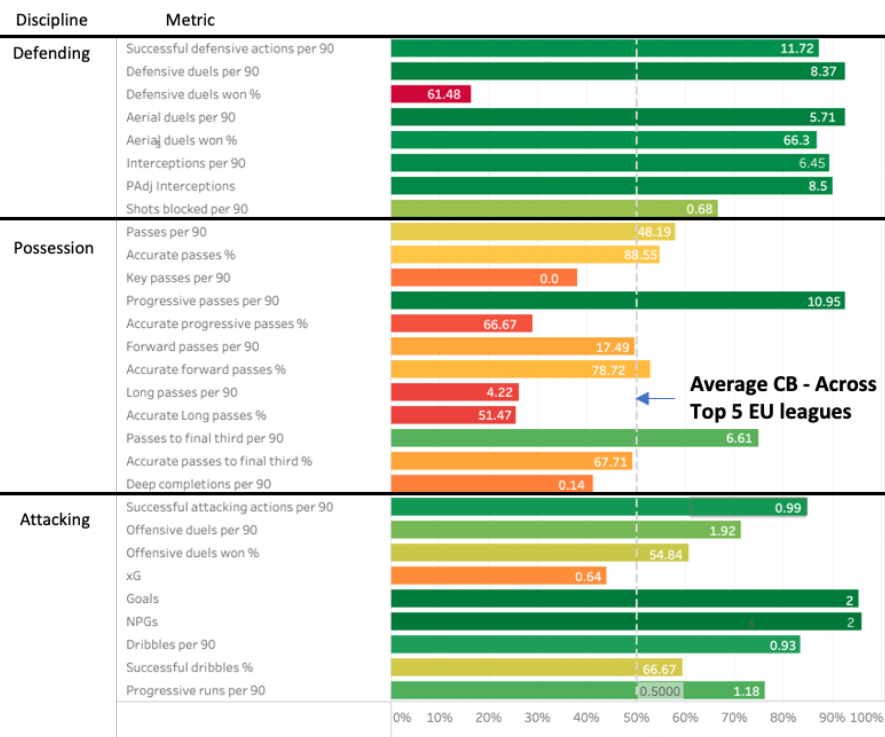 â¢ Comfortable bringing the ball out of defence

Evan NâDicka is an accomplished ball playing centre back who looks to play out from the defence and is comfortable with either foot. His defensive quality is of a high standard and would likely command a large figure to secure a signature should he be available this winter window. With West Ham United efficient at set pieces and a key part of the attacking repertoire NâDickaâs presence would be an asset to the attacking phase of play whilst providing robust cover in the defensive phase of the game.


* My proposed central midfield, central attacking midfield and centre forward targets to follow in Part 3 of this article.