Lucas Digne is a French international left-back playing for Everton in the Premier League. He has played 13 times this season. 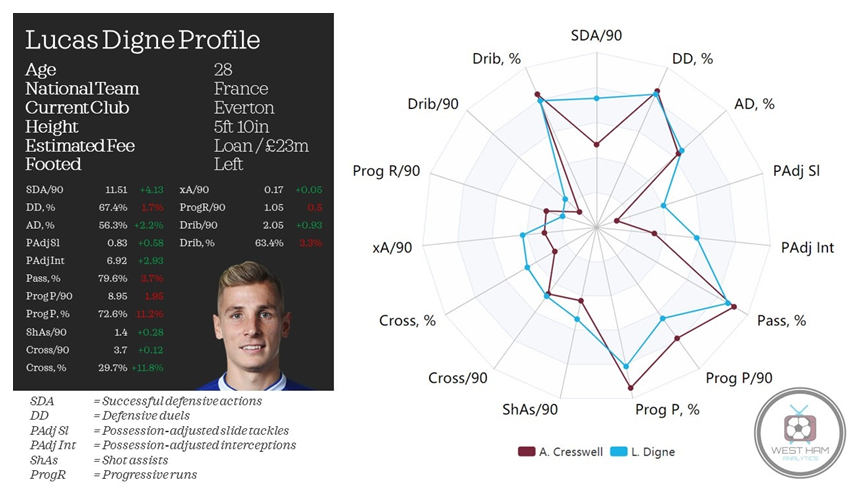 Current France and Everton defender Lucas Digne has been one of the strongest full-backs in the Premier League since he arrived on Merseyside from Barcelona. Recently, Digne has fallen out with Everton manager Rafa Benitez over the stylistic approach that the Spaniard employs. Benitezâs defensive and reactive style doesnât match well with Digneâs swashbuckling contribution from left-back. And with the two unlikely to be able to repair this rift, Digne looks certain to leave Everton this January.

Digne is said to be keen on staying in the UK and the Premier League if at all possible and when looking down the league table, there are few clubs in need of a left-back that you can imagine Digne moving to. Chelsea have shown some interest but will be keen to retain Ben Chilwell as the first-choice option when he returns from injury. Aston Villa could be an option but weâd imagine theyâve blown a big chunk of their budget on Philippe Coutinhoâs wages. And Newcastle have already made a bid but given that it included Sean Longstaff as a makeweight, we think itâs improbable that Digne heads for Tyneside.

That leaves West Ham. And with Aaron Cresswell out injured and Arthur Masuaku clearly not a long-term safe pick at left-back, Digne has emerged as a vaguely realistic choice.

Despite having been dropped, Digne has recorded the third highest xA per 90 among starting Premier League left-backs this season (0.17), impressively above both Andy Robertson and Joao Cancelo. As everyone knows, crossing is Digneâs biggest weapon and while he has crossed the ball with similar regularity to Cresswell (3.7/3.58 per 90), Digne has been far more successful with 29.73% of his crosses finding their target compared to Cresswellâs 17.91%.

Passing is a crucial part of what we will be looking for in a left-back as Cresswellâs 53.5 passes per 90 places him as the third most involved left-back in the league this season. And although Digne is considerably less involved in build-up for Everton, his passing accuracy scans positively with 76.11% of his forward passes finding their mark, only just behind Cresswellâs 77.72% success rate.

There has been a lot of talk from fans and pundits alike about Digneâs inability to defend but the numbers, whilst obviously not gospel, would suggest that this is nonsense. In fact, this season there are only two players with a better record against dribblers in the Premier League - Bissouma has tackled 81.3% of dribblers, whilst Alex Telles has tackled 76.9%, and Digne 73.3%. Not bad for a lad who canât defend. This notion that Digne is a bad defender is further disproven by his impressive defensive duel success rate of 67.35%, which is only 2% worse than Cresswell who was enjoying a very good season defensively before he got injured.

Digneâs defensive output isnât limited to duels and tackles either. Before the French left-back was dropped, he was regaining possession even more frequently by chipping in with an average of 5.85 interceptions per 90 (6.92 when adjusted for possession). Digne has actually averaged a total of 11.51 successful defensive actions (interceptions, successful defensive duels, and successful slide tackles) per 90 this season, which is more than any other Everton player and considerably more than Cresswell (7.38). Clearly Digne wasnât dropped because of his form, nor because heâs a bad defender, and Iâm sure Benitez is hoping that Mykolenko can come in and fill the obvious void at left-back.

There are key issues here though. Cresswell is 32 and Digne is 28 â both are of the requisite quality to be first-team options for the vast majority of teams at this level. Neither would be happy to settle for being a backup, certainly not Digne given that his rejection of such a role at Everton is the central reason that weâre even talking about him.

From a squad-building perspective, youâd also be quite keen to bring in a younger player as a backup in this position so that thereâs ample room for growth in both the playerâs performance levels and their resale value so that finances are protected and long-termism is prioritised.

Callumâs Rating: B
Digne has proven himself at Premier League level and looks to be the perfect mould to play a similar role to Cresswell, but the fee will likely be exorbitant and I'd prefer someone slightly younger.