Marcos Senesi is an Argentine centre-back currently playing for Feyenoord in the Eredivisie. He has appeared 17 times in the league this season. 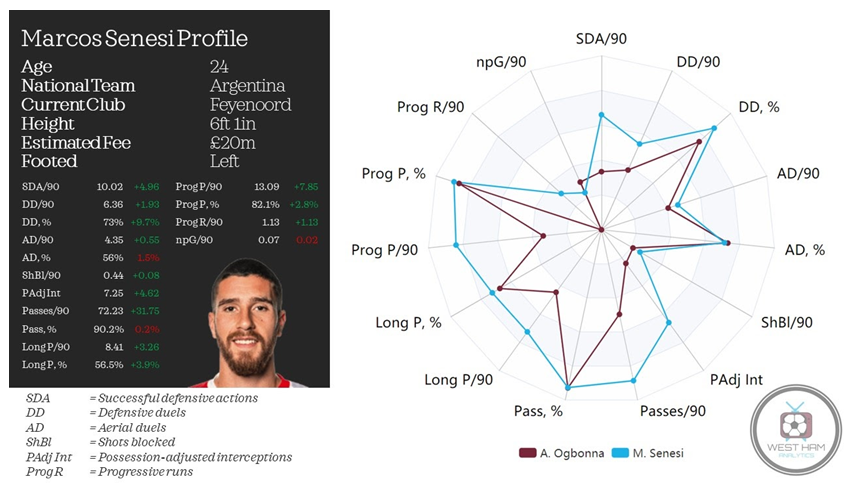 When looking on the market for left-sided centre-backs that would seem to be within reach, Marcos Senesi comes out near the very top. The Argentinian centre-back has excelled in the Netherlands over the last couple of seasons since arriving from San Lorenzo for Â£6.3m in 2019. In fact, Senesi has developed such a big reputation in that period that Real Madrid are now reported to hold an interest.

A big chunk of Senesiâs reputation comes from his progressive ability on the ball. So far this season, he has averaged 72.2 passes per 90, considerably more than any of our current centre-backs and higher than Aaron Cresswell (53.5), showing just how involved he is in build-up. Even more eye-catching is his passing accuracy of 90% which is level with Angelo Ogbonnaâs but considerably more impressive given heâs attempting 30 extra passes in each game.

Senesiâs most enticing metric though, is that he is currently attempting 13.1 progressive passes with a success rate of 82.1%. Once again, this is more than Cresswell (10.9) has managed this season, someone who we have already identified as being one of our most important players in terms of deep progression. Bringing Senesi in would certainly add composure to our backline whilst also allowing us to be less dependent on Cresswell to bring players into the game and play balls in behind. He would bring genuine ball-playing ability to the heart of our defence.

An added bonus is his ball-carrying ability too. With a dribble success rate of 68% and an average of 1.13 progressive runs per 90, Senesi has proven that heâs just as comfortable advancing possession with the ball at his feet as he is passing; one look at his heatmap just confirms how mobile a centre-back he is. Of course, thereâs a big difference between the Eredivisie and the Premier League but both the numbers and the ability he has shown so far in his career make for very promising viewing.

Almost one of the greatest goals ever scored at Stamford Bridge.
Almost... pic.twitter.com/uiSzxeDf2j

Taking a moment to imagine Zouma and Senesi playing together

And though these positive passing and progressions stats might be building an image of a footballer who doesnât fancy getting stuck in, Senesiâs aggression in the tackle is borne out statistically. Winning a seriously impressive 73% of his defensive duels, Senesi would have the second highest duel success rate of defenders at the club, only marginally beaten by Kurt Zoumaâs 73.5%.

Despite this, Senesi is yet to make the Argentine national squad. He looks like the perfect player to eventually replace ex-Man City star Nicolas Otamendi but Lisandro Martinez and German Pezzella were picked ahead of him in Lionel Scaloniâs Copa America 2021 squad while Facundo Medina, Nehuen Perez and Leonel Mosevich have been getting the nod for the U23 squad.

One of the reasons for this might be that Senesi can be a little overeager to press up and try to win the ball high. Generally, heâs excellent at spotting good moments to attempt an interception but he has occasionally been punished when getting it wrong.

Senesi doesnât quite have the pace over the first five yards to recover when caught out by opposition forwards making it important to select him alongside an athletic centre-back with the pace and ability to provide cover in these situations. Thankfully, Zouma is exactly the kind of player you could imagine Senesi forming a formidable partnership with.

Itâs strange that Senesi has been so clearly overlooked at international level and you can be certain that heâll be keen to work his way into Scaloniâs plans. Perhaps a move to the Premier League as a starting centre-back may be the best way to advance his chances?


Jackâs Rating: A-
A young centre-back with huge potential to be one of the best in his position in the future. Heâs not quite the finished article and that slight inconsistency drops him down a rank for me but heâs a quality player that weâd be lucky to have.

Callumâs Rating: A
Senesi is probably at the top of my list of left-sided centre-backs that Iâd like us to sign. Heâs a brilliant defender with European experience and his progressive ability would be a real positive addition to our defence. Heâs also a good age and, given his failure to earn a senior cap for Argentina, would likely welcome a move â sign him up.