Breel Embolo is a Swiss striker currently playing for Borussia Monchengladbach in the German Bundesliga. He has scored or assisted a total of eight goals from 14 appearances in all competitions so far this season. 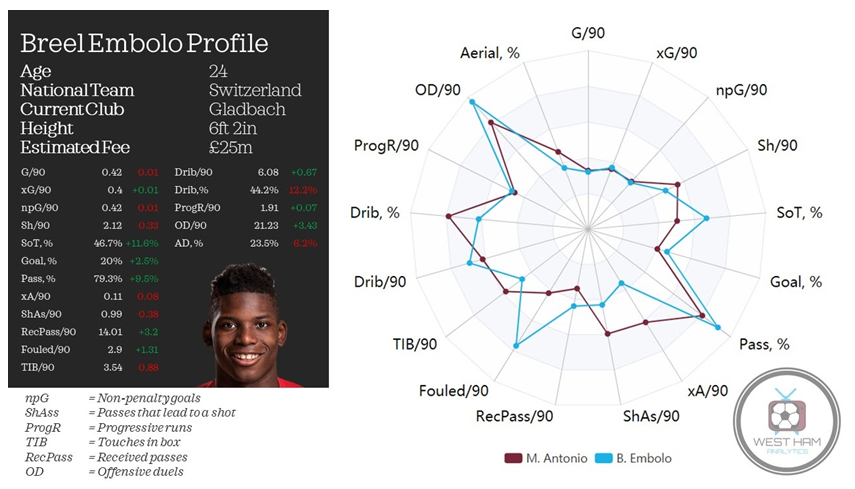 West Ham have been consistently linked with Breel Embolo since the summer transfer window of 2015, seven years ago. Back then, Embolo was tearing up trees in the Swiss league for Basel, much like another striker weâve already covered this January, having burst onto the scene in Switzerland with 10 goals and nine assists in his first senior season.

Expectedly, a summer of intense transfer speculation followed, but Embolo would stay at Basel and consolidate his positive form of the season before by returning almost identical numbers once more. That was enough for Bundesliga club Schalke 04 to take the leap.

The Â£23.85m fee was eye-watering, it would make Embolo Schalkeâs all-time record transfer and the pressure when he arrived was intense. Inspired by the performances of another prodigious teenager â Leroy Sane, Schalke had finished 5th in the previous season and were looking to build on a squad that contained a raft of other highly rated youngsters like Thilo Kehrer, Sead Kolasinac, Matija Nastasic, Leon Goretzka, Pierre-Emile Hojbjerg, Max Meyer and Julian Draxler. And thatâs after factoring the sales of both Leroy Sane and Joel Matip to Manchester City and Liverpool that summer.

Clearly, it was an incredibly talented group and Embolo had been signed to ease some of the load on veteran striker Klaas-Jan Huntelaar and replace Leroy Sane in the long-term. Though misfortune would strike in that first season and just after announcing himself as a Schalke player with a brace against Monchengladbach in a 4-0 win, Embolo would suffer a season-ending ankle injury.

28 league games later he would return to the bench for Schalkeâs season-opener against RB Leipzig but would fail to get onto the pitch and this would be the rhythm with which much of that season would play out. 10 minutes here, half an hour there, and the very occasional start but scarcely in his preferred position; three goals and three assists wasnât exactly an explosive return. And five goals and four assists in 2018-19, a season Embolo again missed a significant chunk of through injury, wasnât much better.

Schalke had seen enough. Gone were the days of European finishes and challenging Germanyâs elite; Schalke were now fighting for survival and Guido Burgstaller was managing to get picked ahead of Embolo. Still young and still highly valued, Schalke decided it was time to cash in and Embolo headed an hour down the road to Monchengladbach.

Things here were looking very different. Having just finished 5th under Dieter Hecking, Die Fohlen had nabbed themselves a shiny new manager from Austria, Marco Rose, and were looking to really challenge. The talent in the squad was undeniable and with an additional top-quality forward to dovetail with Lars Stindl and Alassane Plea and help replace the outgoing Thorgan Hazard, âGladbach hoped to consolidate their European spot and push for the Champions League.

Finally back in an environment where the club and his manager believed in him, Embolo flourished. Swapping between playing in the hole and up-front in Roseâs 4231, Embolo would score eight goals and assist five times in a hugely successful season for âGladbach where they would make their return to the Champions League with a fourth-place-finish in the Bundesliga. Embolo showed all his best qualities in this season, most notably how involved he is in attacking phases of play, reflected by his frequent engagement in offensive duels (18.65 per 90) and dribbles (6.89 attempted per 90, with a success rate of 49.7%). Remarkably, Embolo is taking part in even more offensive duels (21.23) so far this season, almost three and a half more than Antonio which is seriously impressive given what a relentless attacker he is. Finding a player who can match and occasionally better Antonioâs level of involvement in the attack is a difficult task but Embolo sure seems to fit that mould.

Another constant throughout Emboloâs career is the accuracy of his shooting. Since companies started recording such data in 2015, Embolo has taken 259 shots in competitive games for club and country and almost half (48.9%) of them have hit the target. This is considerably better than Antonio who has only found the target with 35.1% of his shots so far in 2021-22.

There is one caveat that needs to be taken into consideration here though, and that is that whilst Embolo has proven himself to be more clinical in front of goal than Antonio, his failure to register a double-digit goal return since leaving Basel means he canât really be considered âprolificâ. And this is further backed up by his consistent xG underperformance in recent seasons, including in 2019-20 when he was expected to have scored 2.85 more goals than he did. Of course, factors like goalkeeping performance come into play here too, but the eye test confirms that Embolo could develop his shooting to an even higher level by focusing on finding the corner more regularly, rather than relying on just the power in his shot.

Despite this, Embolo has still been an integral member of Gladbachâs attack since arriving, contributing with a goal or an assist once every three games (0.36 GA per 90) last season, and more than one in two the season before (0.59 GA per 90). So, whilst Embolo has yet to score 10 goals in a senior campaign in Germany, his attacking return is still very impressive for a player who has struggled to lock down a place in the starting 11 due to his fitness and has often been used as something of a Swiss army knife in attack (pardon the pun), featuring as a number nine, a number 10, and on both flanks under Rose and HÃ¼tter. Whilst some might question why heâs struggled to make one of those attacking positions his own, it seems likely that Moyes would view this versatility as an enticing facet of Emboloâs game.

Signs of his raw ability have often been limited to moments but if Embolo could bring it all together and find some consistent fitness and form, he would be one of the best forwards in Europe. And given that heâs still just 24 years old, time is still very much on his side.


Jackâs Rating: B
We mentioned some injury concerns in the article and injuries continue to be a problem for Embolo. While he hasnât had a serious injury since his time at Schalke, he has since been bothered by that ankle and had a couple of hamstring niggles that have kept him out for games here and there. Without that, this would be a B+/A- from me. His form isnât all there but I think heâs a good stylistic fit for the Premier League and a great fit for us as a backup to Antonio with room to grow into a similarly dominant physical presence in the future.

Callumâs Rating: B+
When Embolo first broke onto the scene I was firmly of the opinion that he was destined to become one of Europeâs most dangerous attackers. Struggles with fitness have so far prevented this from becoming a reality but the talent is definitely still there. Given his strength, pace, and how frequently he engages in offensive duels and dribbles, I think weâd be hard-pressed to find a more suitable successor to Antonio. Chuck his age, versatility, and European experience into the mix and, assuming he can stay fit, we might just have found our ideal striker.