Sven Botman is a 21 year-old Dutch centre-back currently playing for Lille in Ligue 1. He has made 18 appearances in all competitions so far this season. 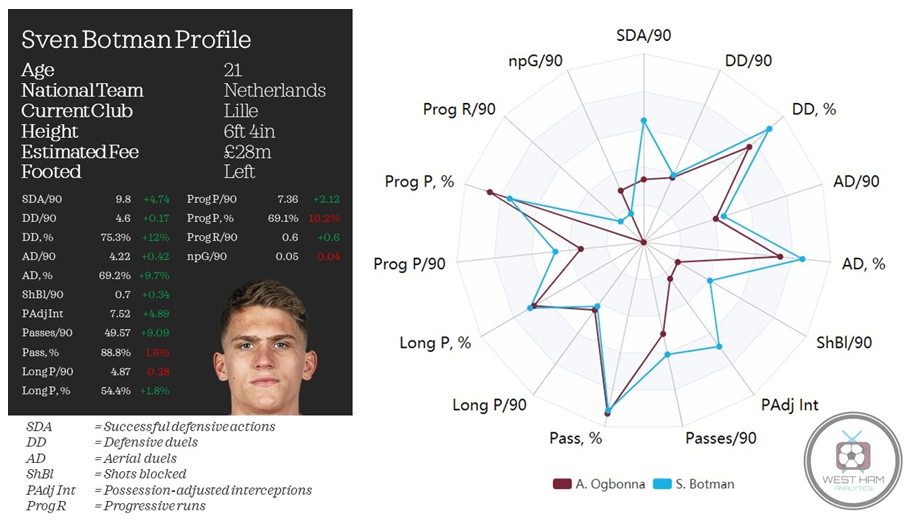 One of the strongest performing under-21 centre-backs in Europe, Sven Botman has been the subject of intense links to Newcastle so far this January. As things stand, it looks unlikely that Lille will sell this window despite their financial issues, as they sit three points outside the European qualification spots in France.

Originally an Ajax youth product, Botman transferred to Northern France in the summer window of 2020 for Â£7.2m after impressing the season before while on loan at Heerenveen in the Eredivisie.

Having sold Gabriel to Arsenal, Lille needed a replacement to partner ex-Hammer Jose Fonte in defence. And they wasted no time in going out and getting a player who is ranked by Hugh Kleinâs Player Replacement Shortlist Generator as 97% similar to the Brazilian.

The key area within which both of these centre-backs excel is their passing, a strength that would hugely improve our current defence. So far this season, Botman has averaged 50 passes per 90 with a very respectable success rate of 88.8%. These numbers put him on a par with Angelo Ogbonna in terms of the quality of their passing, though the Lille centre-back is completing 10 more passes per 90.

What really separates Botman from Ogbonna is his instinct to look forward and progress the ball in possession. 40% of Botmanâs passes this season have been forward passes, compared to Ogbonnaâs 30%, and 7.35 of his 50 passes have been progressive. The frequency (4.6 per 90) and accuracy (69.4%) of Botmanâs passing to the final third would also provide an improvement on Ogbonna, strengthening our left-side whilst also taking some of the pressure off Aaron Cresswell when we are building play from the back.

Botman turned out to be an inspired signing for Lille with the Dutchman proving to be a key player as they secured their fourth Ligue 1 title last year. It wasnât just in possession that Botman was valuable though, in fact itâs in defence that he truly excels. At 6â5â tall, heâs a monstrous presence at the back and wins an exceptional number of his aerial duels (69.2%), more than any defender in the Premier League this season bar Grant Hanley (69.8%). You can only imagine how excited David Moyes would get over the prospect of having such a player in his squad.

Botmanâs defensive ability is on an even higher level though, itâs undoubtedly his biggest strength. Winning 75% of your defensive duels is no mean feat at any level, but to be doing that at the age of 21 in one of Europeâs top 5 leagues is bordering on world class so itâs no surprise thereâs been so much interest in him. For context: Botman is winning 12% more defensive duels than Ogbonna, and almost 2% more than Kurt Zouma, two players who we all heralded as being excellent defenders before anything else.

Predictably, people question his true ability because of the inferior quality of Ligue 1, but Botman has already held his own against some of the best players in the world. The most telling example of his talent was in a game against PSG last season in which Kylian Mbappe, Neymar, and Angel Di Maria all played. He played the entire match, won 6 out of 8 defensive duels (75%), registered 6 interceptions, 11 ball recoveries, and completed 81% of his 26 passes. If he can do that against some of the best attackers in world football at 20-years-old, then I donât think heâll have much trouble defending against the likes of Callum Wilson and Chris Wood. And thatâs without even mentioning his height, strength and recovery pace.

Despite all the positives though, there are still some overriding significant issues surrounding Botman. And these are largely based around the fact that when a 21 year-old performs to the levels Botman has done at points over the last two seasons (and does so at a club playing Champions League football), theyâre going to cost an awful lot of moneyâ¦ Newcastle will continue to pose problems for clubs like us, Everton, and Aston Villa here too. Weâre shopping in the same range and Newcastle are waving around wads of cash and increasing the price on virtually every player of interest.

Lille are rumoured to be holding out for even more than the Â£30m bids that have reportedly been made this window so far and with Champions League football still to come and a good chance to return to Ligue 1âs top four, you can understand why.


Jackâs Rating: D
Botman is undoubtedly a great talent with a big future ahead but as long as Lille continue to price him out of moves with hopes of attracting a big fish in the summer, thereâs little sense in pursuing a deal here.

Callumâs Rating: C
If you could guarantee that we could bring him in this window for Â£25-30m then it would be an A*, because his ability is undeniable and his physical profile is made for the Premier League. Unfortunately, Lille donât look like theyâre willing to sell in January, so we can expect a bidding war in the summer where fees could reach Â£50m.