David Raum is a 23-year-old German left-back currently playing for Hoffenheim in the Bundesliga. He has appeared 17 times in the league this season returning two goals and six assists. 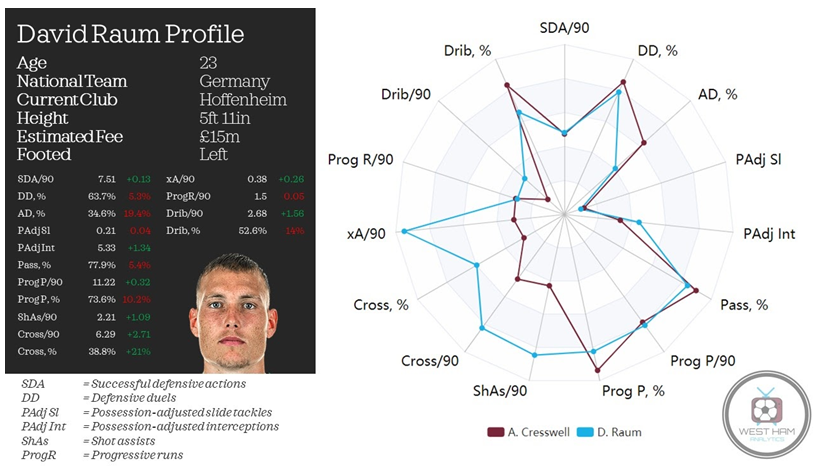 David Raum is one of the most exciting young full-backs in the world. With eight goal returns in just 17 games so far this season, heâs on track to record a goal involvement in every other game at top-flight level. And this comes after he enjoyed a ludicrously successful campaign with Greuther Furth in the German second division last season.

As Furth charged to automatic promotion, Raum was one of the key players in the team, locking down a place at left-back in the back four and providing a ridiculous 15 assists in 34 league appearances.

And before these stunning last couple of campaigns, Raum had already shown the potential to be one of the most productive and creative left-sided players in Europe. It was back in the under-19s at Furth that he would have first attracted attention from scouts around the world when he returned 10 goals and 13 assists in the Southwest Junior Bundesliga (the highest quality U19 youth division in Germany); a season that included an incredible individual performance against Freiburg where Raum laid on five assists in one match.

Now 23, and well beyond an initially awkward transition to senior football, Raum is flying. Hoffenheim brought him in on a free after his contract with Furth expired at the end of last season and currently sit third in the table with Raum already proving to be one of their best players. Just recently, Raum played a crucial role in securing victories over Freiburg and Augsburg. He scored the opener and assisted the winner in Hoffenheimâs 2-1 win over the former, and scored and assisted again as they beat Augsburg 3-1 last weekend.

Evidently, Raum is a force to be reckoned with in attack, and whilst his goal and assist metrics alone support this notion, the underlying numbers only strengthen his claim to being one of Europeâs hottest young prospects. Perhaps unsurprisingly, one area where Raum really stands out when compared to other high-performing full-backs is his crossing. So far this season, Raum has averaged an astonishing 6.3 crosses per 90 with an even more impressive success rate of 38.8%. For context, Raumâs crossing metrics absolutely swamp Aaron Cresswellâs 3.6 crosses per 90 at 17.9%.

When using crossing accuracy as a gauge of quality itâs sensible to consider who the forwards are. And whatâs surprising about Raumâs numbers is that he is having this success in a team where two of the three primary attackers are under six feet tall (Mu'nas Dabbur and Andrej Kramaric) and the other is only 6â1â (Ihlas Bebou). Imagine the sort of trouble Raumâs delivery could cause in a team that contains Tomas Soucek.

This is an especially exciting prospect when you consider that both Vladimir Coufal and Cresswell have consistently outperformed their expected assist totals, suggesting that our attackers are capable of finishing the chances theyâre presented with. Raumâs xA per 90 this season is 0.37, more than double that of either Cresswellâs 0.12 or Coufalâs 0.13. If Raum were to join West Ham, he would almost certainly bring goals. And whilst this would obviously be dependent on him maintaining his exceptional performance levels in the Premier League, a significantly more challenging environment than the Bundesliga, his seamless transition from the second division in Germany to the top-flight should go some way to easing those concerns.

Often when you have a full-back who offers so much in attack, you might find that theyâre a little lacking in defence, but this isnât the case with Raum. This season, Raum has engaged in 5.82 defensive duels per 90 and has a very respectable success rate of 63.71%. Cresswell, in comparison, has taken part in an almost identical number of duels (5.34) but boasts a truly impressive 69% success rate. It should be said that whilst Raum is recording a worse defensive duel success rate than Cresswell, this is by no means bad as Cresswell has defended exceptionally well when called upon this season. Raum compensates for this comparative inferiority by intercepting effectively anyway, averaging 1.34 more possession-adjusted interceptions per 90 than Cresswell, resulting in the two players recording a similar number of successful defensive actions in each game (Raum = 7.51, Cresswell = 7.38).

The only area in which Cresswell truly trumps Raum is passing. This may sound a little strange given how productive the latter is in the final third but Raumâs overall passing accuracy is only 77.9%, whereas Cresswell, a much more reliable and frequent distributor, is recording four more passes per 90 with an increased accuracy of 83.3%. Cresswellâs most important role in this West Ham side is to progress the ball in build-up, and whilst Raum records almost two and a half less passes to the final third per 90, his accuracy of 72.8% is actually better than Cresswellâs (69%). This suggests that he does have the talent to pick out teammates in advanced areas and only has to work on being able to produce this more regularly in matches.

The biggest concern with Raumâs passing is actually his somewhat alarming 83.8% short pass completion over the course of the last calendar year, which places him in the bottom 9% of full-backs in Europe's top five leagues. Cresswell, on the other hand, completes 90.5% of his short passes, placing him in the top 25%. In a team that sometimes struggles to play out from the back, this composure and ability to play in tight spaces is invaluable. But perhaps itâs important to remember that Raum is playing in a league where the average number of possession-adjusted team pressures (155.26) is considerably higher than in the Premier League (144.26). So, in theory, heâd have slightly more time to think before making a pass in Englandâ¦

The overall picture is hugely positive. Raum is a wonderful attacking left-back that gives up little defensively despite flying forwards to great effect so often. He's comfortable playing in a four or at wing-back in a five and given that he's only halfway through his first season in top-flight football, the sky is the limit.


Jackâs Rating: A
David Raum is one of the most exciting young full-backs in the world. His productivity in the final third is impossible to ignore and given that this is only his first season in the top-flight, thereâs still so much room for him to blossom from here. With his value still considered to be fairly reasonable, going early here could leave us sorted in the left-back position for years to come.

Callumâs Rating: A
At just 23, Raum's proven himself to be a competent defender in the top flight, handling the step up as though it didn't exist, and his productivity speaks for itself. With time very much on his side his ceiling is high and we'd be wise to get in there before bigger clubs come knocking.