Aaron Hickey is a Scottish left-back currently playing for Bologna in Serie A. He has appeared 19 times this season and scored four goals. 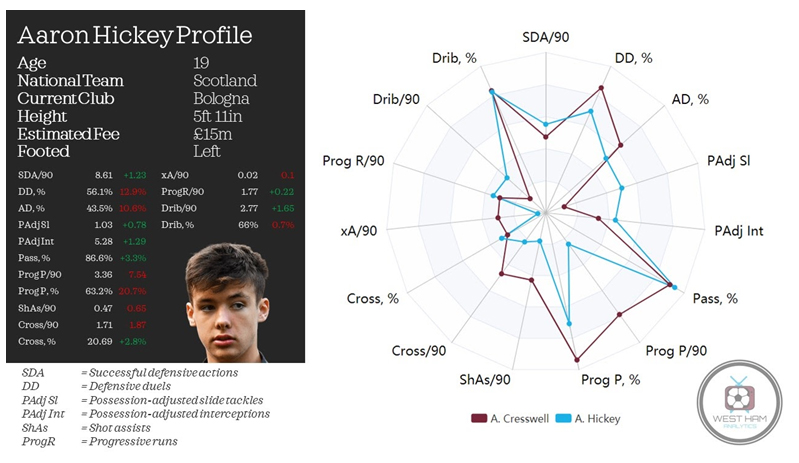 Aaron Hickey became the fifth Scot to appear in Serie A when he made his debut for Bologna last season (points to anyone who can name the other four). He was signed from Hearts for just Â£1.53m after he had nailed a starting spot in the Scottish Premiership at just 17.

Initially a Celtic youth product, Hickey is the latest in a developing group of British players moving to leagues around Europe in search of minutes at a good level. And it seems to be a successful tack with Jadon Sancho, Fikayo Tomori and Jude Bellingham all benefiting greatly from making similar moves.

For Hickey, getting 30 appearances under his belt in the Italian top-flight is no small feat. And he hasnât looked out of place either; heâs quite comfortably dislodged more senior pros like Mitchell Dijks from the left-back spot in Northern Italy.

Mainly deployed at wing-back so far this season, as Bologna stick to the 3412 that saw them rise to eighth back at the start of December, Hickey has scored four goals, often with a similar technique too. Hickey is remarkably two-footed for a full-back and has been able to cut inside from the left wing and shoot from the edge of the box with his right foot to great effect. His current goal conversion rate of 26.7% is actually better than both Antonioâs (17.5%) and Bowenâs (12.3%). Who knows, maybe he could do a job covering at striker too!

Hickey played as LWB instead of LB which may suit his fit in this team and drew 6 fouls & made 3 crosses through his 87 mins on the pitch.pic.twitter.com/1UPmMoIlF5

Another string to Hickeyâs bow is that his two-footedness means he is capable of playing at right-back too. As we know, David Moyes is a big fan of players with positional flexibility and having Ben Johnson and Hickey to cover for Aaron Cresswell and Vladimir Coufal would be a bonus with both comfortable covering either flank. His ambidexterity also helps him out in possession as it allows him to dribble through the press with relative ease, flipping the ball between both feet to dance around lunges before initiating a counter. So far this season, Hickey has attempted an average of 2.77 dribbles per 90 and boasts a seriously impressive success rate of 66%. You would think that a defender with the skill and athleticism to beat his man and carry the ball up the pitch on the counter would be a very useful weapon for Moyes to have up his sleeve.

Whilst Hickey can certainly beat a man and score a goal, heâs yet to prove that he can create them and his lack of creative output is a little surprising for a left-back that is so highly thought of across Europe. The most obvious indication of this lack of creativity is Hickeyâs alarmingly low expected assist output, just 0.02 per 90 this season and 0 the season prior. This is undoubtedly linked to the fact that Hickey is rarely attempting to penetrate the area with his passing, attempting just 1.71 crosses per 90 and 1.06 passes to the penalty area. Given that Hickey is playing as a wing-back for Bologna such low numbers at first appear quite shocking, but on closer inspection itâs clear that this is a tactical decision. This low frequency of crossing is a consequence of Mihajlovic exploiting Hickeyâs goal-scoring and dribbling ability, instructing him to cut inside and head for goal rather than hit the flanks and bombard the box. Thankfully, Hickey is still young and his crossing accuracy of 20.7% this season, whilst not great, suggests that he could develop to play in a more cross-heavy system.

One area of Hickeyâs game that does stand out as being particularly underwhelming is his progressive passing. 3.4 progressive passes per 90 is low, and given that this is an area that we have consistently talked about as being of the utmost importance when recruiting a new left-back youâd be right to question Hickeyâs suitability. As ever though, context is key, as his low number of progressive passes can be attributed to the advanced positions he tends to find himself in, meaning that his passes donât often register as âprogressiveâ. His general passing accuracy of 86.6% suggests that he could probably adapt his game to develop into a deeper playmaking role, a notion that is further supported by his 70% accuracy when passing to the final third while at Hearts.

Hickey is reasonably solid defensively, boasting a defensive duel success rate of 56.1% and averaging 1 slide tackle and 5.3 interceptions per 90 when adjusted for possession. These are very respectable numbers for a 19-year-old playing senior football, but itâs when Hickey finds himself under a high ball that he can look a little weak. At 5â11â, Hickey doesnât really qualify as a âshortâ full-back and yet he has only won 43.5% of his aerial duels. Whilst this isnât a major sticking point for a player in his position, it could prove to be problematic when playing against teams who employ a more direct brand of football.

Bologna has proven to be a decent place to recruit a full-back recently with Takehiro Tomiyasu performing brilliantly so far this season after his move to Arsenal in the summer. And Hickey has attracted interest from across the Premier League too. Aston Villa were rumoured to be close to agreeing a deal for the Scot before Lucas Digne suddenly emerged as a realistic option. Given Moyesâ historic success at recruiting and developing full-backs â Leighton Baines and Seamus Coleman come to mind â Iâd trust in him completely if he were to move for Hickey.

Jackâs Rating: B-
Hickey probably isnât quite the right profile as a long-term Cresswell replacement but he would represent an upgrade on Masuaku as a long-term option for the wing-back position with the ability to provide cover at full-back on either side when required.

Callumâs Rating: C+
Whilst thereâs no doubt in my mind that Hickey is an exciting and very talented young player, I think we should be looking for a successor to Cresswell and Iâm just not convinced Hickey is that guy, at least not yet. I think he could become that player, but thereâs no guarantee, so Iâd be inclined to look for a more sure-fire option.