Abdou Diallo is a Senegalese centre-back currently playing for PSG in Ligue 1. He has made nine appearances in the league this season with seven of those coming at left-back. 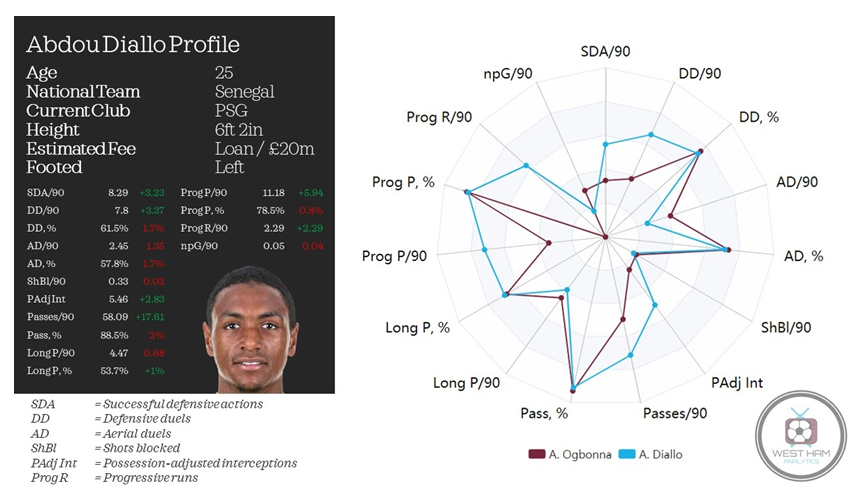 Currently in Cameroon and starting for the Senegalese team that will have hopes of progressing to the latter stages of AFCON 2021, Abdou Diallo has popped up on West Hamâs radar this window as a possible left-centre-back that we could recruit on a short-term loan.

Since arriving in Paris, Diallo has struggled to nail down a regular first-team spot. Although this is probably reflective of most playersâ experiences in the French capital as PSG constantly turn over their squad with huge investment in search of that elusive first Champions League win. Often shunted out to left-back to cover for Juan Bernat when the Spaniard has been unavailable, we havenât really been able to see what Diallo can do at centre-back over an extended period of games since he left Dortmund in 2019.

Initially a Monaco youth product, Diallo first appeared in Ligue 1 as an 18 year-old substitute in a 1-0 over Marseille before going out on loan the next season to Belgian First Division side SV Zulte Waregem. Diallo nailed a first-team spot in Belgium alongside Joel Sami and solidified the defensive unit that carried them to a sixth-placed finish in the league.

Dialloâs return to Monaco wasnât quite as successful as he mightâve hoped though as he failed to displace either Kamil Glik or Jemerson from Leonardo Jardimâs back four and only managed to make five appearances in the league. Not sure that he wouldâve had too many complaints though as he finished the season with a Ligue 1 winners medal as Monaco broke the record for the longest winning run in French top-flight history with sixteen consecutive victories.

Monacoâs incredible 2016-17 performance would lead to the kind of attention that they simply couldnât repel though and Diallo was one of many that would move on to pastures new in the following summer. Bernardo Silva and Benjamin Mendy joined Man City, Tiemoue Bakayoko left for Chelsea, and Diallo left for German Bundesliga club Mainz.

The move would work out perfectly for Diallo. New manager Sandro Schwarz was willing to put his faith in the young defender and Diallo became a key fixture of Mainzâs defence alongside players like Stefan Bell, Alexander Hack and Leon Balogun. If none of those sound like particularly inspiring names, then you wouldnât be surprised to hear that Mainz 14th and just three points clear of the relegation zone.

Diallo had performed well though and his individual form earned him a Â£25.2m move to Borussia Dortmund where he would excel at left-centre-back in a back four under Lucien Favre.

Since starting this series the two of us have talked at length about the importance of signing a progressive centre-back for the left side of our defence to aid our ability in transition. So, when rumours began to circulate about West Hamâs supposed interest in Diallo our attention was very much grabbed. As mentioned already, Diallo has played at both centre-back and left-back so far in his career, which goes some way to explaining his 2.29 progressive runs per 90, a high number for any centre-half and considerably more than Angelo Ogbonnaâs zero. This ball-carrying ability is also reflected by his 47.5% dribble success rate which is solid for a centre-back thatâs attempting 2.75 dribbles per 90. Having a centre-back with the confidence and ability to take matters into his own hands and progress possession with the ball at his feet would add a new dynamic to our build-up.

There is a flipside to Dialloâs tendency to run with the ball though. What happens if you only complete 47.5% of your three dribble attempts per 90? You lose possession 52.5% of the time. So far this season, in the limited minutes (766) that Diallo has played in the league, he has averaged 2.11 possession losses per 90. This would scan terribly if Diallo were solely playing at centre-back but he has largely been deployed at left-back so far this season for PSG.

Thankfully, Diallo is an accomplished passer of the ball too. Averaging 58.1 passes per 90 this season, almost 20 more than Ogbonna, Diallo boasts a very respectable pass success rate of 88.5%. Itâs this contribution in build-up that would be most valuable to a West Ham team that have struggled for fluidity in possession without Ogbonna; Dialloâs 8.8 successful progressive passes per 90 (from 11.2 attempts) is an extremely eye-catching return. And if that alone wasnât enough to convince David Moyes of Dialloâs progressive ability then the fact that Diallo has completed 50% of his line-breaking passes and 75% of his passes to the final third should help. Dialloâs impressive passing metrics suggest that he has the ability to contribute enormously in possession.

Dialloâs defensive data further supports the notion that he would be more than capable of coming in and succeeding Ogbonna too. Dialloâs defensive duel success rate of 61.5% is only marginally worse than Ogbonnaâs 63.2%, but Diallo has engaged in 3.37 more defensive duels per 90 this season, suggesting that he is a more front-footed defender. This front-footedness is also reflected by Dialloâs superior number of interceptions, 5.5 per 90 when adjusted for possession, which is 2.83 more than Ogbonna. The final piece in the David Moyes defensive metric trifecta is aerial ability, and whilst he is smaller than Dawson and Zouma at 6â2â, he is still winning 58% of his aerial duels. Heâs good on the deck, good in the tackle, and good in the air â maybe we should get him.


Jackâs Rating: B-
Diallo would represent good value if he were available on loan to cover both left-centre-back and left-back for what remains of the season. Iâm not sure that his performances since returning to France are strong enough evidence that he would be worth the fee that would be required to extract him from PSG.

Callumâs Rating: B+
Heâs 25, his progressive and defensive metrics are good, and he has Champions League experience. If we can get him on a six-month loan with an option to buy for a reasonable fee then I think this is a no-brainer. If he performs, we sign him on a permanent and have a quality, long-term partner for Zouma. If heâs no good, then we simply send him back to PSG.