Josh Doig is a Scottish left-back currently playing for Hibernian in the Scottish Premiership. He has made 16 appearances this season and returned one assist. 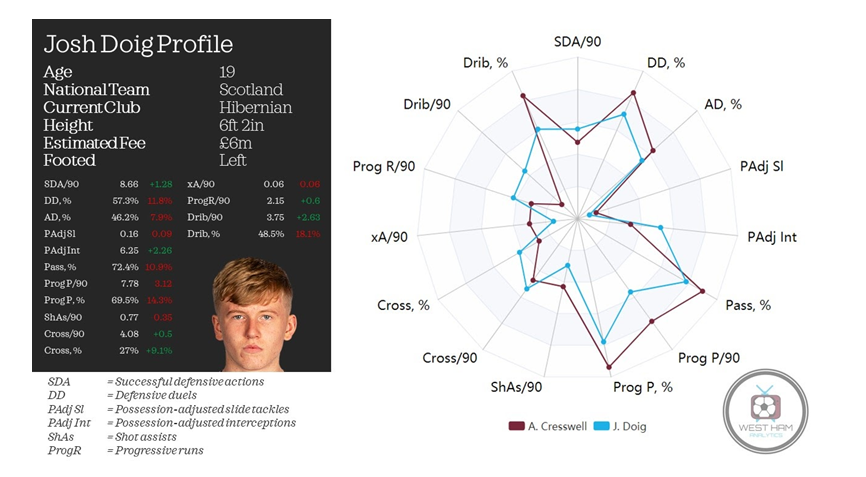 19 year-old Josh Doig is one of the most promising young players in the Scottish Premiership and the latest in a line of ridiculously talented left-backs that have come out of Scotland in recent years.

Originally a youth player at Hearts, Doig was released in 2019 and moved to Hibernian before being sent out on loan to Queens Park of the Scottish fourth tier. And though Doig only appeared seven times in Glasgow, he was an instant hit and has enjoyed a meteoric rise since.
Returning to Edinburgh to begin the 2020-21 season, Doig lined up in the left-wing-back spot on Matchday One against Kilmarnock after being picked ahead of 32 year-old Hibs stalwart Lewis Stevenson. And but for a six-game stretch in the middle of that season, itâs been Doigâs spot since. Given that Stevenson has the fourth-most appearances in Hibernianâs history (511); ousting him from the side at such a young age is a significant achievement.

Much like the other Scottish left-back that we covered in this series, Doigâs greatest asset appears to be his ball-carrying ability. Playing as a wing-back with the comfort of three centre-backs behind him, Doig has the license to bomb forward with great regularity in Shaun Maloneyâs side. So far this season, Doig has averaged 3.8 dribbles per 90 with a success rate of 48.5%. This puts him on a par with Arthur Masuaku (3.8) and is considerably more than both Aarons Cresswell (1.3) and Hickey (2.8).

Unlike Hickey though, who is instructed to carry the ball inside and create chances centrally, Doig is more of an orthodox wing-back whose role involves lots of crossing from advanced positions. We all know how integral Cresswellâs crossing is to our style of play, so Doigâs 4.1 crosses per 90 would no doubt be put to good use by David Moyes. The quality of his crossing is decent too, with 27% of his balls into the box finding their intended target, more than Cresswell has managed this season (20.3%). Doigâs youthful pace would add a different dynamic to our left flank in the sense that he, unlike Cresswell and more like Vladimir Coufal, could offer a constant overlapping threat for the entirety of the game.

Beyond crossing though, Doigâs general passing is an area of his game that would need to be improved were he to become a member of the West Ham squad. This season, Doigâs passing accuracy stands at an underwhelming 72.4%, considerably less than Cresswellâs 82.4%. Of course, Doig is still young and there is clearly room for development but this looseness in possession would be exploited in the Premier League. One promising metric though is the accuracy of Doigâs progressive passing (69.5%) which suggests that the potential is there for him to play a similar role to Cresswell in build-up. At present, both Doigâs frequency (7.8 per 90) and accuracy are inferior to Cresswellâs (11.2 progressive passes per 90 with 83.2% accuracy) but this is because the latter is performing at an elite level this season.

Whilst Doigâs 6.3 possession-adjusted interceptions per 90 is a better return than Cresswellâs (4.4), his quality in defensive duels is lacking. Doig is currently winning 57.3% of these duels which, whilst not terrible, is much less than Cresswellâs 67.6%. Context is important here too, as the players that Doig is currently facing up against in the SPL are of much lower quality than those heâd be tasked with defending in the Premier League. Were we to sign him this window, we should probably expect to see something of a defensive drop-off upon arrival as he acclimatises to a higher level. Perhaps most surprising of all his defensive metrics though is his fairly meagre quality when facing high balls. You would expect a full-back that stands at 6â2â to be good in the air, particularly given that the average height of a winger is much smaller than that, but Doig is only winning 46.2% of his aerial duels. This is less than Cresswell, who is only 5â7â, some seven inches shorter than Doig.

These unimpressive defensive metrics are especially surprising given Doigâs comfortability playing centre-back. Doig often featured more regularly in the middle of the defence before Ray McKinnon, his manager at Queenâs Park, gave him his chance at left-wing-back. It was in this loan spell that he was first likened to Liverpool sensation Andy Robertson (who also first burst onto the scene at Queenâs Park), with McKinnon saying âHe has everything. He's quick, aggressive, athletic, with a great deliveryâ.

Doig almost certainly has a big future in the game but with three years left on his contract and Hibs keen to hold onto him, it seems unlikely that the fee required would represent good value just yet.


Jackâs Rating: D
Iâd like to see Doig given more time to develop his game before considering a move for him. Whilst his energy, enthusiasm and aggression are excellent, his creative output fails to excite and his defensive metrics arenât particularly impressive either. He clearly has the potential to become a great player but Iâm not sure heâs what we need right now.

Callumâs Rating: C
He has the potential to be our eventual Cresswell successor but I expect whoever we sign to be called upon quite a bit and Iâm not sure Doig is ready for that responsibility. If he was available for a reasonable fee then I might consider signing him now as a development option before his value rises, alongside a more sure-fire short-term option for now. Otherwise, Iâd leave him to continue his development in Scotland and monitor whether his game improves in the areas we have highlighted.