Mohamed Bayo is a 23 year-old Guinean striker currently playing for Clermont Foot in Ligue 1. He has made 17 appearances this season, scoring nine goals and providing two assists. 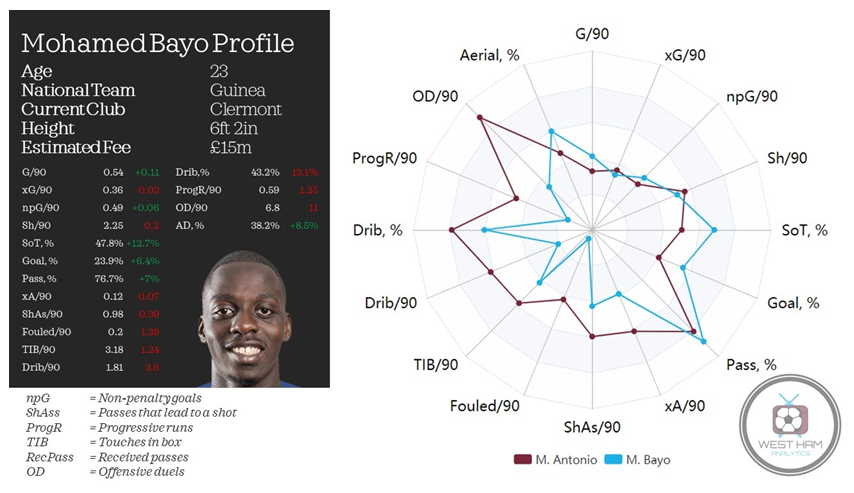 Born in the small university town of Clermont-Ferrand in central France, Mohamed Bayo has led his local team into the promised land for the first time in their history this season. One of the smallest clubs to have ever achieved promotion to Ligue 1, Clermont Foot record yearly total attendance figures that still wouldnât be able to fill the London Stadium. And yet they are in their first top-flight season ever thanks in large part to one local youngster.

Bayo scored 22 goals last season as he fired Clermont to a second-place finish in Ligue 2, enough to secure promotion, and has since sustained their hopes of survival with nine goals from the opening 17 league games. That makes him joint-third top scorer in Ligue 1 so far this season, level with PSGâs Kylian Mbappe, and this excellent form has earned him a call-up to the Guinean national team for whom he is leading the line at AFCON 2021.

One thing that Bayo has already proven beyond doubt is that he can put chances away. Over the course of the last three seasons, Bayo has played his way up the French footballing ladder scoring more than 10 goals in each of Franceâs top three flights. Many questioned whether he would be able to handle the transition to Ligue 1, but Bayo has silenced critics by maintaining his one-in-two form and recording an impressive goal conversion rate of 23.9%. Bayoâs shooting in general has proven to be pretty impressive, with 47.8% of his shots hitting the target this season. For context, Bayo is outperforming Michail Antonio in both of these metrics, whose shooting accuracy is 35.1% and goal conversion rate is 17.5%.

Although Bayo is clearly an excellent finisher, there has been a stylistic shift in the Premier League in recent years that likely wouldnât suit him. Limited forwards that rely on their movement and finishing around the penalty spot like Bayo have often struggled in recent years with more mobile or creative forwards preferred. Strikers are expected to do much more than score goals and you only have to look towards the top of the Premier League to see this in action with Manchester City, Liverpool and Chelsea regularly opting for strikerless or false-nine systems.

Often, the most effective strikers in the league combine other developed skill-sets with a knack for finding the back of the net. Diogo Jota, Ollie Watkins and Antonio have all achieved great success as converted wingers and combine pace and creativity with their goalscoring ability. While forwards like Roberto Firmino or even Harry Kane have enjoyed dropping deeper to provide for teammates. Patrick Bamford at Leeds has shown the value of having a relentless presser up-front and even teams as traditional as Burnley have jumped on the bandwagon with Maxwel Cornet, another converted winger, performing fantastically so far this season for The Clarets.

One of Antonioâs biggest strengths since reinventing himself as a striker has been his ability to bring his teammates into play. His creativity has been crucial to our success as it has brought the best out of players like Jarrod Bowen and itâs no surprise to see that Antonio is leading the league for expected assists amongst strikers this season (0.18 per 90). Were Antonio to be dropped or injured, losing his chance creation would be a huge blow. And Bayo, for all his excellent work inside the box, is not an accomplished provider, lagging behind both Antonioâs expected assists per 90 (0.12 < 0.19) and shot creating actions per 90 (2.36 < 3.50). Perhaps the most damning indictment of Bayoâs inferior creativity though is the fact that he has only laid on 10 assists over the course of the last four seasons while Antonio has provided seven this season alone.

Another facet of Antonioâs game that is integral to the way we play is his dribbling ability, an area of Bayoâs game that is also lacking. So far this season Antonio is averaging an impressive 5.41 dribble attempts per 90 with a success rate of 56.3%, equating to 3 successful dribbles in every match. By contrast, Bayo only completes 0.8 dribbles per 90 (1.81 dribble attempts with a success rate of 43.2%), barely assisting in carrying the ball forward for his team.

Antonioâs ability to beat his man coupled with his freakish athleticism allows him to record 1.85 progressive runs per 90, reflecting the important role that he plays in driving the ball up the pitch in attack. Quite simply, Bayo is not that kind of player. This season he has averaged just 0.6 progressive runs per 90, which means heâd have to play at least three games before he could even get close to matching what Antonio can do in 90 minutes. Taking this and his lack of dribbling ability into account, itâs hard to imagine how Bayo would slot into an attack that can be as fluid as ours.

When putting this all together, we can see that Bayo is much less involved in overall play and is recording almost three times less offensive duels per 90 than Antonio (6.8 < 17.8). Having a striker whose talents are as diverse as Antonio who can spearhead counters, bully defenders, provide for his teammates and score goals is rare, but finding someone who could do at least a couple of those things wouldnât be impossible. Someone like Bayo though, whoâs engaging in so few offensive duels despite being in solid goalscoring form, wouldnât fit the bill. Heâs proven that he can score goals but beyond that he seems to offer little else and that wouldnât be enough to thrive as a striker in a David Moyes team, nor in the Premier League more generally.


Jackâs Rating: D
Bayo must prove he has more to his game than just goals at Ligue 1 level before heâs given the opportunity to show what he can do in the Premier League.

Callumâs Rating: C-
Every club wants a goalscorer and Bayo has proven himself to be one. Antonio is more than that though, so if we are going to bring in a striker to compete with and eventually replace him then we should be after someone more diverse than Bayo.