Hugo Ekitike is a 19 year-old French striker currently playing for Reims in Ligue 1. He has scored eight goals and provided three assists in 17 appearances so far this season. 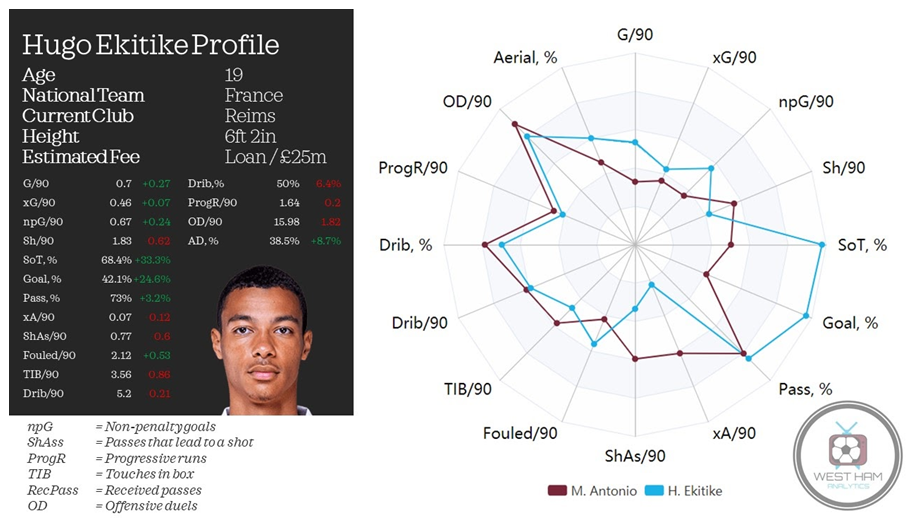 Hugo Ekitikeâs name has been circulating this January with his stunning form this season landing him on scout reports across Europe. Before Newcastle signed Chris Wood from Burnley, the Magpies were rumoured to have put a significant bid in for Ekitike but this was later replaced with suggestions that West Ham remain the only club to have had any real contact with Reims as yet. Itâll come as little surprise that that so-called contact came in the form of a loan offerâ¦

Ekitikeâs form this season has been nothing short of magnificent as the youngster has begun to appear more regularly for Reims after spending last season out on loan with Vejle Boldklub in Denmark. Reims often play a front three that will either consist of a striker flanked by two wingers or two strikers supported by an attacking midfielder. And rarely seen partnering fellow young number nine El Bilal Toure, Ekitike has largely been used in tandem with the creative talent of Ilan Kebbal and Mitchell van Bergen in the tighter front three with Ghislain Konan and Thomas Foket tasked with providing the width from the wing-back positions.

Though Ekitike is yet to have played 1,000 minutes of Ligue 1 football, he has already proven that he is an incredible finisher. 68.42% of his shots have found the target this season and his goal conversion rate of 42.1% is only bettered by Monacoâs Wissam Ben Yedder (of strikers to have played more than 500 minutes in Europeâs top five leagues). These are absurd numbers and, though there will undoubtedly be some regression, theyâre backed up when watching Ekitike play. His goal against Stade Rennais earlier this season is a perfect example of a good striker making finishing look simple.

Interestingly, Ekitikeâs numbers track very closely to Michail Antonioâs when looking beyond his finishing. Both forwards dribble at a similar rate with Antonio slightly more successful of the two (5.5 dribbles per 90 with 56.58% success > 5.2 dribbles per 90 with 50% success). And Antonio also edges Ekitike out when it comes to overall attacking involvement with 17.77 offensive duels and 4.16 touches in the box per 90 to Ekitikeâs 16 offensive duels and 3.57 touches in the box. The two are even very similar when it comes to their unreliable first touch with both recording similarly disappointing miscontrols per 90 (Ekitike: 4.16, Antonio: 3.76) and dispossessions per 90 (Ekitike: 2.91, Antonio: 2.83).

Ekitike and Antonio do differ dramatically when it comes to their off-the-ball work though as this is an area of Ekitikeâs game that is particularly strong. Recording 18.42 pressures and 2.6 tackles and interceptions per 90, Ekitike is Ligue 1âs busiest forward out of possession, constantly haranguing opposition defenders for the ball and winning it back for his team. These numbers are significantly stronger than Antonioâs with our number nine only recording 12.83 pressures and 1.24 tackles and interceptions per 90. Whilst Ekitike might not be the most efficient presser, only 23.2% of his pressures prove to be successful, his constant energy makes him a nuisance to the opposition and his tireless work ethic gives him a good platform from which he can learn to develop his efficiency over time.

One area of Ekitikeâs game that isnât quite as strong is his creative contribution. Antonio has been excellent this season at finding teammates in good positions around him and this has proven to be a key part of our success with several players recording healthy numbers of goal contributions so far. And this is borne out in the numbers too with Antonio recording 1.2 shot assists and 0.66 key passes per 90 alongside his seven assists overall. Ekitike on the other hand has managed just 0.8 shot assists and 0.51 key passes per 90 with three assists overall. These are still good returns and perhaps we would see an improvement in these numbers if Ekitike were able to combine with stronger attacking teammates.

As mentioned earlier, Ekitike often isnât selected when Reims manager Oscar Garcia opts for more of a 343 where the striker could end up being more isolated. Ekitikeâs teammate El Bilal Toure, who is currently away at AFCON with Mali, is often preferred for this role and this is likely because Ekitikeâs strength and hold-up play leave a lot to be desired. Although he stands at 6â2â, Ekitike hasnât yet filled out his frame and can be made to look lightweight by opposition defenders when trying to retain possession for his team.

Ekitike started this season as Reimsâ fourth-choice striker but has managed to establish himself as a key player for Les Rouges et Blancs in just the six months since. His most impressive assets are his explosive pace across the first few yards allowing him to burst away from markers in the box, his faultless finishing ability, and his tireless work off-the-ball. And, whilst he still needs to develop his creative contribution, the mentality Ekitike has shown in maximising his impact with the few chances heâs been given is exactly what heâll require to continue to grow as a player from here.

To already have the composure to score goals like this against top opposition at just 19 is seriously impressive and itâs these moments that will have attracted the attention of scouts from Europeâs biggest clubs.

Ekitikeâs first half of this season has got the world paying attention. Itâs his job now to show that he can shut that out and keep delivering on the pitch with the weight of expectation on his shoulders.


Jackâs Rating: B
Ekitike has burst onto the scene in incredible fashion this season but needs more time to establish himself as a senior pro before he can justify the huge price-tag rumoured to be required to extract him from Northern France.

Callumâs Rating: B+
Ekitike is showing all the signs of becoming a top, top striker but he has only been doing this for half a season. Iâd want to be convinced that this isnât a flash in the pan if we were to bring him in for such a lofty fee (~Â£25m), particularly when other promising young attackers like Cabral and Hlozek are reportedly available for roughly half that.