Karl Toko Ekambi is a Cameroonian forward currently playing for Lyon in Ligue 1. He has appeared 23 times this season scoring 11 goals and providing four assists. 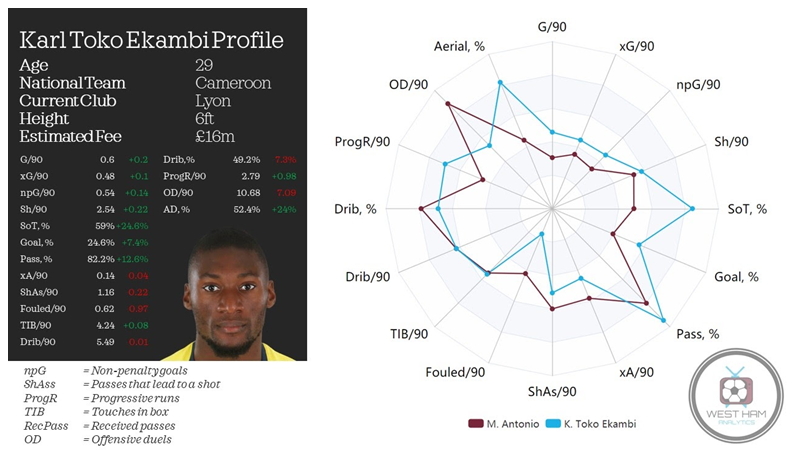 Karl Toko Ekambi is no spring chicken. At 29, he has amassed 180 top-flight appearances in France and Spain and has 41 international caps for Cameroon. He got the 41st of those last night as he appeared in Cameroonâs 1-1 draw with Cape Verde after scoring two in their last group stage match at AFCON 2021 against Ethiopia.

Much like our own number nine, Toko Ekambi was a late bloomer and it was only after proving his worth for several years in the French lower leagues that he earned a move to Angers in 2016.

The Loire club spent Â£1.13m on Ekambi after the Cameroonian had two steady seasons for Sochaux-Montbeliard in Ligue 2 and Ekambiâs transition to top-flight football was seamless. He finished his first Ligue 1 season as Angersâ second highest goalscorer in all competitions with eight goals and five assists.

It was Ekambiâs second season in Western France where he really came alive though, scoring a stunning 17 league goals and providing six assists for a team that finished 14th. This kind of goalscoring return was the strongest Angers had seen from a forward in years, only Claudiu Keseru and Anthony Modeste can claim to have achieved similar for Le SCO but both of their stunning seasons came in Ligue 2.

Although Ekambi couldnât lift Angers up the Ligue 1 table, he did rake in a fair chunk of change for them when he became their joint-record sale (alongside Nicolas Pepe) in the summer of 2018. Villarreal were lucky beneficiaries as Ekambi traded the Loire for Northern Valencia in a Â£16.2m transfer.

Prior to 2018-19, Ekambi had only known French football. Born in Paris and a product of the Paris FC academy, Ekambi had spent his entire career up to this point in France; his move to Villarreal would give him his first opportunity to show what he could do at an even higher level.

It did take Ekambi a little while to settle in Spain but he certainly wasnât short of goals in his first season at his new club. If 17 goals and six assists in Ligue 1 was impressive, 18 goals and seven assists in all competitions in his first season in Spain may be even more so. But things wouldnât continue so smoothly on the Mediterranean coast for Ekambi and as he went through a rough patch of form in the following season, Gerard Moreno emerged.

Moreno has since scored 51 goals in 102 games, a perfect one-in-two rate at the top level, and Villarreal were quick to sense they were onto something brilliant with the Spaniard. Within just a couple of weeks of being ousted from the starting lineup, Ekambi was on the move again and headed back to France on loan to Lyon. Itâs hard to blame Villarreal for being so quick to dismiss Ekambi given Morenoâs exploits, but on reflection Ekambi can be pleased with his performance in his short time with the Yellow Submarine.

Despite Ekambiâs return to France coinciding with his weakest run of form to date, just two goals and three assists in 20 games, Lyon knew they were getting a good deal when Â£10.35m was enough to extricate Ekambi from Villarreal. And Les Gones have since been richly rewarded with Ekambi returning 14 goals and nine assists last season and exploding so far this term.

Largely deployed on the left-wing by manager Peter Bosz, Ekambi is in the top 4% of wingers for xG per 90 in Europeâs top five leagues across the last calendar year.

Lyon have often opted for a system with a false nine and two inside forwards in Ekambiâs time with the club. To begin with, it wouldâve been Memphis Depay playing as the nine with Ekambi and Tino Kadewere marauding in off the flanks. In this system, Ekambi was generally fixed wider than Kadewere as the Zimbabwean is much more comfortable operating in central areas where Ekambi is happy to drop deep and link play.

This season, Ekambi has tended to play a more traditional left-wing role in a 4231 with one of Moussa Dembele, Islam Slimani or Lucas Paqueta selected to play through the middle. Donât let this make you think that he isnât suited to playing up-top though. Despite playing left midfield, Ekambi has recorded the same xG per 90 as Ligue 1âs top-scoring number nine, Jonathan David (0.48), and is way out in front of Michail Antonio (0.38).

Ekambiâs pace, movement, and combination play are his strongest assets but he is also just as comfortable scoring with his head as he is with his feet. Although his fantastic aerial duel success rate must be caveated by the fact that he is contesting significantly less aerial duels than most centre-forwards and is likely challenging shorter full-backs for the ball, winning 52.38% of these duels remains impressive (Antonioâs manages just 28.4%). And the fact that he scored three times with his head already this season requires no qualification.

Ekambi is a strong ball-carrier; he has attempted 5.49 dribbles per 90 with 49.24% success so far this season. This means he is successfully completing 2.6 dribbles per 90, behind Antonioâs 3.11 but ahead of other strikers we have already covered this window like David (1.21) and Mohamed Bayo (0.74). Active out of possession too, Ekambi has recorded 4.57 successful defensive actions per 90 this season alongside 4.04 possession-adjusted interceptions per 90, significantly more than Antonioâs 2.68 and 1.37.

Yet to miss a single game through injury across his whole career so far, Ekambi has proven that he is always reliably fit and available. Often one of the lesser-appreciated attributes that a player may have, fitness should be prized as you certainly canât contribute if youâre stuck working with the physios for half the season.

Ekambiâs finishing has left a little to be desired as he is currently underperforming his xG by 0.1 per 90 this season but his goal conversion rate remains relatively healthy at 24.59%, meaning he is finishing with similar success to Callum Wilson (26.1%) and Armando Broja (23.81%). And whilst he may be less regularly involved than Antonio (10.68 < 17.77 offensive duels per 90), Ekambi is hugely efficient and wins 39.69% of his offensive duels, almost 10% more than Antonio manages (30.96%).

Overall, Ekambi has shown across the last five seasons that he can cut it at the top level and return goals at a healthy rate, just shy of one-in-two, whilst maintaining an impressive level of creative output throughout. He may not be the youngest or highest potential forward on the market but he would be a safe pick as someone experienced who would be able to deputise for Antonio while we blood someone younger to take over the role in the future.


Jackâs Rating: B-
If Ekambi had played more regularly as a number nine across the last two seasons, Iâd struggle to find reasons to mark him down from an A. But given his lack of regular game-time as a lone striker, there are potential suitability issues here.

Callumâs Rating: C+
Ekambi has clocked a healthy number of goal contributions in each of the last seven seasons, acclimatising to different leagues and positions with aplomb. Whilst his attacking prowess cannot be disputed, I do have concerns about his ability to operate as a lone striker. For this reason, along with the fact that he is almost 30 and likely wonât be available for less than Â£15m, I would pursue younger, better value targets.