Ihlas Bebou is a Togolese striker currently playing for TSG Hoffenheim in the German Bundesliga. He has appeared 15 times this season, scoring seven goals and providing two assists. 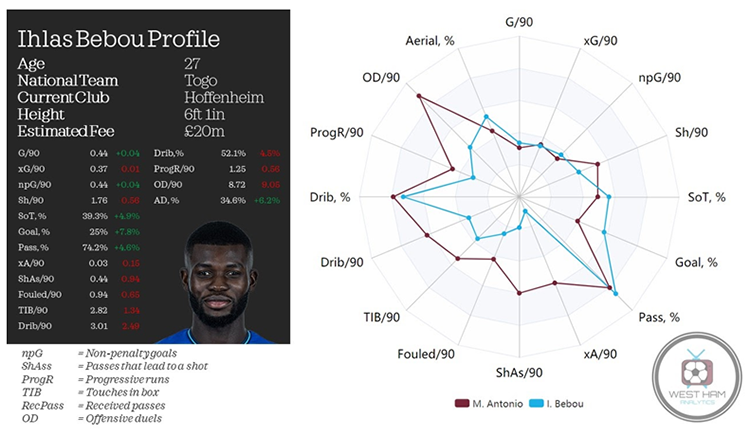 Over David Moyesâ two spells at West Ham, the Scot has had great success when converting wingers into strikers. Marko Arnautovic performed fantastically in the number nine role during his first term and, since Moyes returned to West Ham in 2019, his use of Michail Antonio as a striker has increased the Jamaicanâs goal involvement output by 72%.

Ihlas Bebou is a converted forward himself. Starting out as a right-winger for Fortuna Dusseldorf in the German second tier, Bebou was more of a creative outlet than a goalscorer. It was only when Bosnian manager Asif Saric arrived at Hannover 96, where Bebou had missed much of the season through injury, that Bebou was moved up-front.

Bebou could do little to save Hannover at that point though, with the North German club already relegated, but his performances clearly caught the eye as Hoffenheim decided to take the risk and pay the Â£7.65m required to bring Bebou in.

The few seasons before Bebou arrived in Hoffenheim had been disrupted by injury and constant position-switches across the midfield; it was a risk to speculate on whether Bebou could really lead the line for TSG and the majority of that first season wasnât wonderful for the Togolese forward. It took him all the way up until the final month of his first season to give Hoffenheim fans a glimpse of what he can really do. And a burst of goals and assists in the final few weeks gave Bebou some confidence to carry into 2020-21, a season that would turn out to be Bebouâs strongest thus far.

Nine goals and eight assists might not sound that remarkable but Bebouâs returns have slowly been ticking up over time and his seven goals already this season leave him well positioned to break his own record again. Winning the Player of the Season award for 2021, Bebouâs increasing output and consistently strong performance levels have earned him a new contract too, a three year extension with Hoffenheim that was agreed last month.

2021-22 has been the first season in which Bebou has regularly led the line alone in a 4231 shape. Since adopting this role, the statistical and stylistic similarities between Bebou and Antonio have been astounding.

So far this season, Bebou has scored 0.44 goals per 90 from 0.37 xG, almost exactly the same as Antonioâs 0.4 goals per 90 from 0.38 xG. Promisingly, both players are outperforming their xG with Bebou managing to do so by slightly more; opening up a real area of strength â his finishing.

Constantly energetic out of possession, Bebou is also attempting 15.96 pressures per 90, 3.57 more than Antonio, with marginally more success per pressure (3%). In fact, Bebouâs defending is much more successful in general with the Togolese recording 57.89% success from 3.57 defensive duels per 90, considerably stronger than Antonioâs 48.68% success from 2.75 duels.

Antonio and Bebou are similarly comfortable ball-carriers with both managing above a 50% success rate from dribble attempts and huge numbers of carries per game (Antonio: 27.01, Bebou: 25.5). And while they both excel at using their dynamism and power to carry the ball forward for their teams, they also tend to have more than their fair share of loose touches, both record more than 3.5 mis-controls per 90.

There is a key area of the game where the two differ though and thatâs when it comes to their passing and creativity. While Bebou passes progressively significantly more than Antonio, and does so with more security (Bebouâs forward passes find their target 19.56% more often than Antonioâs do), Antonioâs passes in the final third are of much higher value when they do connect. This is clearly evidenced by Antonioâs 0.18 xA per 90, a huge number compared to Bebouâs paltry 0.03.

Bebou is also much less active in attacks than Antonio. Although these numbers are somewhat difficult to compare given how central Antonio is to every single attacking move at West Ham, only Allan Saint-Maximin clocks up more offensive duels per 90 in the Premier League (of forwards to have played more than 1,000 minutes). Bebou, on the other hand, is involved in almost 10 less offensive duels per 90, too significant a difference to ignore. Although, this must be caveated by the fact that Bebou is still recording the highest number of offensive duels per 90 of any player at Hoffenheim, so perhaps we can attribute this one to systemic differences rather than a lack of the kind of chaotic energy weâve enjoyed up-top in Stratford.

At 27, Bebou isnât the highest value target on the market. And with a shiny new contract bumping up the asking price to extract him from West Germany, it would be hard to justify the outlay required to make a transfer happen. Bebou is improving every season though and he is one of the closest statistical and stylistic matches to Antonio in Europe. Heâs yet to have any real fitness concerns since moving to Hoffenheim and is set to break his own goals record for the second year running. If he is ever to get his big move, now would be the time.


Jackâs Rating: C+
Bebou is a similar option to Karl Toko Ekambi. A more established forward who has a positive track record and stylistic similarities that would hopefully ease transition. Heâs not a long-term answer but could be a useful addition as a rotation option with the flexibility to cover all four of the forward positions.

Callumâs Rating: C
Bebou is a player in his prime and his versatility, finishing ability, and physical profile would make him a valuable member of the squad. The contract renewal is a real hurdle though as it will have driven up any potential fee, and if weâre going to spend around Â£20m on a striker then I think we can probably do better than Bebou.