Mohammed Salisu is a Ghanaian centre-back currently playing for Southampton in the Premier League. He has made 22 appearances in all competitions this season, scoring one goal. 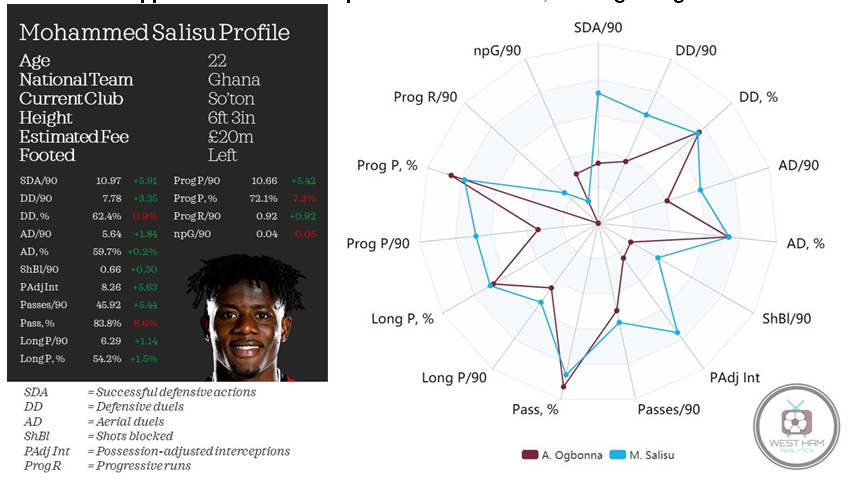 After an initially awkward transition from La Liga to the Premier League, Mohamed Salisu has stepped up this season for Southampton. Born in Accra, Ghana, Salisu was pinched from the Africa Talent Football Academy by Real Valladolid of the Spanish second division in 2017.

18 at the time of his move, it took Salisu a little while to acclimatise and rise through the ranks at Valladolid but it didnât take him quite so long to establish himself as a key player once he made the grade.
It was in the 2019-20 season that Salisu first made the starting eleven in the league, off the back of his impressive outings the season before for Valladolid B. Fernando Calero had been first choice beforehand but he had earned a move to RCD Espanyol as reward for his consistently strong form, opening the door to the Valladolid first team for Salisu.

And Salisu grabbed his opportunity with both hands, starting as he meant to go on with an impressive performance in a 2-1 away win over Real Betis. From that point on, Salisu would be a key figure in a Valladolid side that would eventually secure an incredible 12 clean sheets in the league.

This was enough for Southampton to pull the trigger in moving early for Salisu, and with a fee of just Â£10.8m proving to be enough to secure the Ghanaianâs services, this looked to be fantastic business. As mentioned though, Salisuâs transition to the Premier League wasnât smooth and his first season was heavily disrupted by muscle injuries that would keep him out for most of the first 23 games. And after returning to fitness, Salisu found himself fighting it out with Jannik Vestergaard who was probably having his best season to date.

Though Salisuâs performances this season explain why Southampton were so happy to sell Vestergaard to Leicester in the summer for just Â£15.84m. He has been excellent for a Southampton side that have been in desperate need of defensive security this season with unsteady goalkeepers and young full-backs to integrate.

A quick glance at Salisuâs radar is enough to confirm that he is blossoming into a very good, well-rounded Premier League centre-back. Clearly Salisu performs well across the board but one area that he really excels in is ball progression and it is the quality of his progressive passing that should be of particular interest to us. So far this season, Salisu has averaged 10.66 progressive passes per 90 with a success rate of 72.13%, equating to approximately 8 passes that advance possession significantly closer to the oppositionâs goal per match. To put this into context, Salisu is completing considerably more progressive passes than Angelo Ogbonna (4.2), Craig Dawson (4.2), Kurt Zouma (3.4), and Issa Diop (3.2). We know weâve said it already this month (Marcos Senesi, we still love you) but signing a defender who is capable of turning defence into attack with a single pass would significantly improve our build-up, making us much more comfortable in possession.

Another impressive facet of Salisuâs passing game, one that is arguably even more valuable than his progressive qualities in the context of West Ham, is his ability to play through the press. Over the course of the last calendar year, Salisu has completed 7.89 passes under pressure per 90, a return that ranks him in the top five percent of all centre-backs in Europeâs Top 5 Leagues (to have played >1350 minutes). Salisuâs confidence on the ball under pressure no doubt stems from Ralph Hassenhuttl, a manager whose high-pressing brand of football has earned him plenty of plaudits since his arrival in the Premier League back in 2018. Hassenhuttlâs training sessions will focus heavily on pressing, and while he drills his attackers to press from the front, Salisu reaps the benefits as he grows increasingly comfortable defending under intense pressure.

One thing that we have struggled with this season is playing through a well-executed press, the most obvious example being against Leeds last weekend when Marcelo Bielsaâs intense pressing tactics put the absolute frighteners on Diop and Dawson. The result was a lot of hopeful long passes, cheap losses of possession, and a midfield that were hardly involved in the game. Had Salisu started at centre-back rather than Diop, his calmness under Leedsâ press would have opened up pockets of space for Declan Rice, Manuel Lanzini and Pablo Fornals to receive the ball and spring attacks. Salisu would also provide some balance playing alongside Zouma who, rather surprisingly, has completed the lowest number of passes under pressure (2.13) of all centre-backs in the Premier League this season (to have played >450 minutes).

Another bonus of playing under a manager whose footballing philosophy is built on the foundation of gegenpressing is that Salisu is also a very effective presser himself. In fact, Salisuâs 40.9% success rate when pressing makes him the second most effective presser in the Premier League this season, only just behind Norwichâs Grant Hanley. Given how dangerous we have proven to be on the counter since the second coming of Moyes, signing a centre-back who is so competent at forcing turnovers would be very smart business.

As well as being obsessed with pressing, Hassenhuttl also has a borderline dogmatic commitment to playing a high defensive line, a principle that has occasionally been criticised by pundits and fans. Why? Because defending in such a fashion comes with risk, leaving you exposed at the back and open to potential drubbings from high quality opposition. Itâs no coincidence that Southampton have suffered two 9-0 losses during Hasenhuttlâs tenure, neither of which featured Salisu. With this in mind, the efficacy of such a system is dependent on having defenders that you can trust both in and out of possession. Thankfully for Saints fans, Salisu is as good off the ball as he is on it.

Perhaps unsurprisingly given Salisuâs pressing ability, he is averaging more possession-adjusted interceptions (8.26) than any of our centre-backs. Most eye-catching though is Salisuâs tackling, an area in which he truly excels. Whilst his defensive duel success rate of 62.4% puts him roughly on a par with Ogbonna (63.3%), his 2.96 tackles per 90 puts him in the top one percent of all centre-backs in Europeâs Top 5 Leagues over the last calendar year (to have played >1350 minutes).

Over the course of that year, Salisu has developed into an excellent Premier League centre-back. His performances against us this season, where he has completely shut down Michail Antonio, are just further evidence of his continuing growth as a player. Given that he is surely now one of Southamptonâs most prized assets, Salisu would likely be a pricey option. But the Saints have a long history of selling their best players and their titanic left-sided centre-back might just be exactly who we need to stabilise a creaking defensive unit.


Jackâs Rating: A+
Although it would cost us a lot of money, Salisu has all the attributes to excel in a long-term partnership with Zouma. He is everything we hoped Diop would be and more and would be at the very top of my list of players Iâd be keen to bring in.

Callumâs Rating: A
Heâs young; heâs left-footed; heâs Premier League proven; heâs progressive; he can play through a press, and heâs a good, front-footed defender. Honestly, Iâm struggling to see whatâs not to love about Salisu and I think heâd be a perfect long-term partner for Zouma, the only concern might be the fee that Southampton demand for him.