Fabio Carvalho is a 19 year-old Portuguese-English attacking midfielder currently playing for Fulham in the Championship. He has appeared 16 times in the league this season, scoring seven goals and providing two assists. 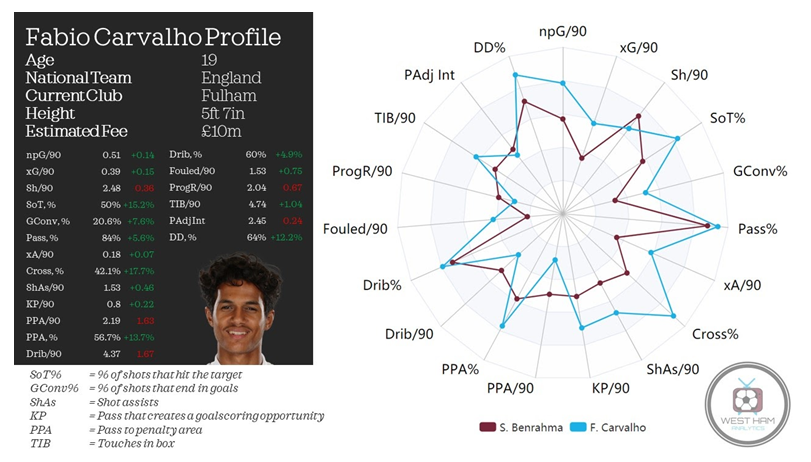 Fabio Carvalho has been on West Hamâs radar for some time. The young attacking midfielder is flourishing this season in the Championship and has bags of talent; so much so that Liverpool have been reported to be interested this January. There are hopes among Hammers fans that Liverpoolâs past dealings with Fulham over Harvey Elliott might present problems for the Merseyside club in pursuing a deal for Carvalho. Clearly, the appetite for a potential transfer is already strong.

A Fulham youth product, Carvalho first burst onto the scene last season when the club were already consigned to relegation from the Premier League. His sparkling performances and goal against Southampton in those final few games rightly earned him both praise and new admirers. And heâs gone on to perform magnificently in the Championship so far this season.

Despite missing eight games through injury after a stunning start with goals in three of Fulhamâs first five games, Carvalho has slowly worked his way back to his best. As Fulhamâs form has peaked in recent weeks, the Cottagers have scored 19 goals in the last three games, Carvalho has also returned to his very best. His two goals against Birmingham this week provide glimpses of the exceptional quality that this 19 year-old possesses.

One of the key things that David Moyes demands from his attacking midfielders is a consistent goals output. Tim Cahill thrived under his tutelage at Everton and Jesse Lingard was rejuvenated last season when playing in the number 10 role at West Ham. Often using the left flank of the pitch as the teamâs creative hub, Moyes looks for his central attacking midfielder and right-sided defensive midfielder to consistently contribute goals.

Said Benrahma was likely targeted because of his hugely impressive goals return for Brentford in the 2019-20 Championship season; Benrahma scored 17 goals and provided nine assists in 43 games that year. And when looking for young players to take on the number 10 position in the future, Carvalho surely must be near the very top of that list. Scoring seven goals already this season and outperforming his total xG by 1.62, Carvalho is showing just how good a finisher he is. 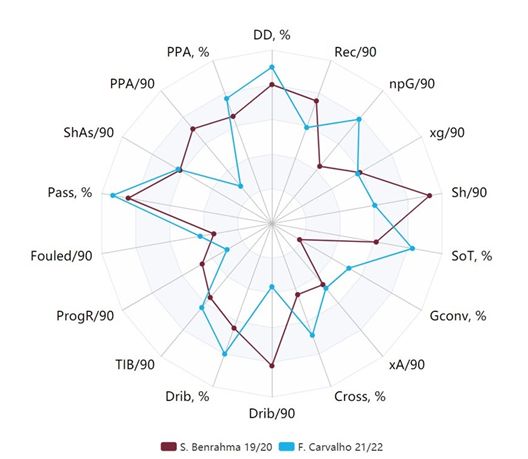 What makes Carvalho an even more enticing prospect is his ability to create dangerous chances for his teammates. With 2.19 passes to the penalty area, 1.53 shot assists, and 0.8 key passes per 90, Carvalho is proving to be a consistent creator for his teammates. His incisive passing from midfield this season has been a huge factor in helping Fulhamâs number nine, Aleksandr Mitrovic, reach an absurd 27 goals this season already.

One of the things that Benrahma has often been criticised for is his general security in possession. Whilst everyone recognises the imagination that Benrahma can bring in the final third, he isnât always reliable in possession and can occasionally turn over possession a little too cheaply. Carvalho is far more secure in general play with an average passing accuracy of 84%, 6% stronger than Benrahma. And he isnât doing this by playing safer in possession; 25% of Carvalhoâs passes travel forwards with 70.59% of them finding their target, this is actually marginally stronger than Benrahma who passes forwards slightly less regularly (22.94%) with similar accuracy (70.27%).

One facet of Benrahmaâs game that is undoubtedly strong is his dribbling. This season, the Algerian has averaged 5.58 dribble attempts per 90, more than any other player at West Ham. And his 56.8% dribble success makes him the fifth most secure dribbler in the league this season (of attacking midfielders to have played >1,000 minutes) with only Adama Traore, Lucas Moura, James Maddison and Demarai Gray ahead. Yet Carvalho can match Benrahma here too. Playing a similar role for Fulham, in that he is the one who is trusted to beat his man and make things happen in the final third, Carvalho is managing to record a superior dribble success rate of 60.34% from his 4.54 dribbles per 90.

Carvalho also puts a shift in out of possession, something that Moyes demands of every player at West Ham but particularly his attacking midfielders. Involved in 6.49 defensive duels per 90 with 64.04% success, Carvalho is more active than Benrahma off the ball (4.6 duels with 51.79% success), despite the improvements the Algerian has made to this side of his game. Those improvements are seen though when comparing the two based on their recoveries as Benrahma recovers possession slightly more regularly than Carvalho (3.25 > 2.45).

Carvalho is one of the most exciting young attackers in the Championship right now and you only have to look at the list of clubs rumoured to be interested to get a sense of the regard he is held in by Premier League recruitment departments. With just six months left on his deal at Fulham and Carvalho rejecting attempts to secure a contract extension, he looks sure to leave West London this summer. West Ham would be wise to push hard to convince Carvalho to stay in the capital â free transfer opportunities like this rarely come along.


Jackâs Rating: A-
Carvalho is a serious prospect with a big future ahead of him. But with Nikola Vlasic, Manuel Lanzini and Said Benrahma in the squad we may have a hard time convincing him that heâll get the kind of game time he needs to continue his development at such a rapid rateâ¦

Callumâs Rating: A
Itâs hard to think of a hotter prospect playing in the Championship at the minute and given Moyesâ success with Bowen and Benrahma we can only assume Carvalho will be on his radar too. And rightly so, because Carvalho ticks all the boxes, the only issue is that heâs shining in a position where we have an unusual amount of depth.