Douglas Santos is a Brazilian left-back currently playing for Zenit Saint Petersburg in the Russian Premier League. He has appeared 21 times this season providing three assists. 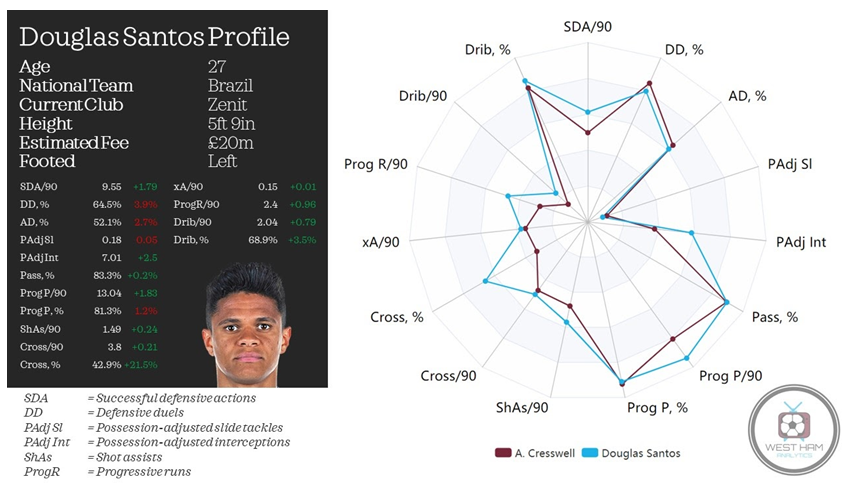 At 27 years old, Douglas Santos isnât the youngest player on our list for this month. Another graduate of the Udinese loan academy (see our article on Pervis Estupinan for an explanation of just how that works), Douglas arrived in Russia in 2019 after leaving Hamburger SV when the German giants failed to secure promotion back to the Bundesliga.

Zenit is Douglasâ sixth club with the Brazilian having started at Nautico of the Brazilian second tier before going on to play for Granada, Udinese and Atletico Mineiro before his stint in Germany. And itâs in Russia where Douglas has really settled.

Zenit have won the Russian Premier League three seasons on the bounce and are currently on track to claim another title, sitting two points ahead of Fabian Balbuenaâs new club, Dynamo Moscow. The Northwestern clubâs dominance can in part be attributed to the performances of free-scoring attackers like Claudinho, Malcom and reported Burnley target, Sardar Azmoun. And whilst itâs true that their goals have been important, credit must also be given to their very solid defence, of which Douglas Santos is an integral member. In fact, since his arrival from Hamburger SV at the start of the 2019-20 season, Zenit have only lost seven of the 78 league games they have played and Douglas Santos has featured in all but seven of those matches (not the same seven, that would be ridiculous).

When you take a look at Douglas Santosâ underlying numbers, Zenitâs excellent form suddenly starts to make sense. Everyone would agree that Aaron Cresswell is enjoying one of his best seasons at West Ham and this is largely because of the improvements he has made defensively. Cresswell has often been labelled as something of a liability in defence but that hasnât been the case this season; his defensive duel success rate of 69.2% makes him the best defensive left-back in the Premier League to have played more than five games. In Cresswellâs absence, teams recognised the significant weakness exposed, targeted our left flank, and consistently reaped the rewards. With that in mind, signing a left-back who can defend to a similar standard is essential. So, itâs particularly pleasing to see that Douglas Santosâ defensive duel success rate of 64.5% is only marginally worse than Cresswellâs and on a par with Player of the Season contender, Joao Cancelo (64.8%). And if that isnât enticing enough, Douglas Santos is also an accomplished off-the-ball defender too, averaging seven interceptions per 90 when adjusted for possession, a whole 2.5 more than Cresswell.

Rightly or wrongly, there is often an assumption amongst football fans that defensively sound full-backs tend to provide less threat going forward. Whilst this might well be the case in some instances, Douglas Santos has been doing his best to dispel this myth over the last few seasons. Assists obviously arenât the be-all and end-all when assessing the value of a full-back, but given how instrumental Cresswellâs delivery has been to our success since David Moyesâ return it would be prudent to sign someone with similar productivity. Impressively, Douglas Santosâ expected assist return of 0.15 per 90 is actually stronger than Cresswellâs (0.11), so there shouldnât be any real concern about his ability to take on the role of chief provider on the left. And if there were any doubts, the Brazilianâs superior success rate when crossing (42.9%>21.4%) and passing to the penalty area (58.2%>39.1%) should quash them.

One added bonus on top of Douglas Santosâ productivity is his ball-carrying ability, which would bring an extra level of speed and dynamism to our left-side in build-up. For all his strengths, Cresswell has never been the paciest of left-backs and itâs a sad truth that heâs only getting slower with age. This doesnât mean to say heâs not still a great player, but bringing in Douglas Santos who is five years his junior and boasts much better recovery pace would give us the option of overlapping on the left, enabling us to build even more dangerous overloads in possession. Douglas Santos is also a better (68.9%>65.4%) and more frequent (2.04>1.25) dribbler than Cresswell too, meaning that we will have the added option of carrying the ball out of defence in build-up. His 2.4 progressive runs per 90, one more than Cresswell, suggest that heâd be just as happy leading the charge as he would be hitting the channels and whipping a ball into the box.

The final point to consider when assessing any potential Cresswell successor is their security in possession and ability to play line-breaking passes from defence. Weâve written at length this month about how important Cresswellâs passing from deep is, and how difficult it is going to be to find someone who can replicate this. So far this season, Cresswell has completed an impressive 9.25 progressive passes per 90 from 11.21 attempts. But Douglas Santos is attempting an incredible 13 progressive passes per 90 and still boasting an almost identical success rate, resulting in 10.6 passes that successfully advance the team significantly closer to the opposition goal. The Brazilian is also completing 0.4 smart passes per 90, which means that his passing is unlocking opposition defences almost once every other game. And the cherry on top of all these impressive metrics is that his 75% success when passing to the final third is five percent better than Cresswellâs, a player whose passing to the final third we herald as being exemplary, and not wrongly either!

Douglas Santosâ fantastic form over the last couple of seasons earned him a new contract with Zenit in the autumn of last year when the left-back renewed his deal in St. Petersburg for another five years. And unfortunately this means that bids to extract the Brazilian from Russiaâs cultural centre would have to be pretty hefty. Though the fee would arguably be justified. Douglas Santos has been a consistent outstanding performer in the Russian Premier League and hasnât looked out of place in Zenitâs Champions League games; he provided a crucial assist in Zenitâs 3-3 draw with Chelsea earlier this season. And Douglas is a perfect stylistic match to replace Cresswellâ¦ A strong creative outlet, an excellent crosser of the ball and a solid defender. Moyes has often had great success when recruiting left-backs in the past, perhaps Douglas Santos could be his next Leighton Baines.


Jackâs Rating: A-
Stylistically, Douglas Santos is a perfect fit to replace Cresswellâs key role within this West Ham team. His progressive ability from the full-back position would make him a perfect addition to the squad. But heâs not young, heâs been playing at a very different level for a long time and has a long-term contract at Zenit.

Callumâs Rating: A
I honestly think Douglas Santos is the perfect Cresswell replacement. His numbers confirm that heâs a stylistic doppelganger and if he can maintain the form heâs been in in Zenit then he wouldnât just be a replacement, heâd be an upgrade. No, heâs not the youngest but heâs still almost five years younger than Cresswell and his experience means we wouldnât be waiting for him to develop before he can contribute.