Flavius Daniliuc is an Austrian centre-back currently playing for OGC Nice in Ligue 1. He has appeared 13 times this season in all competitions. 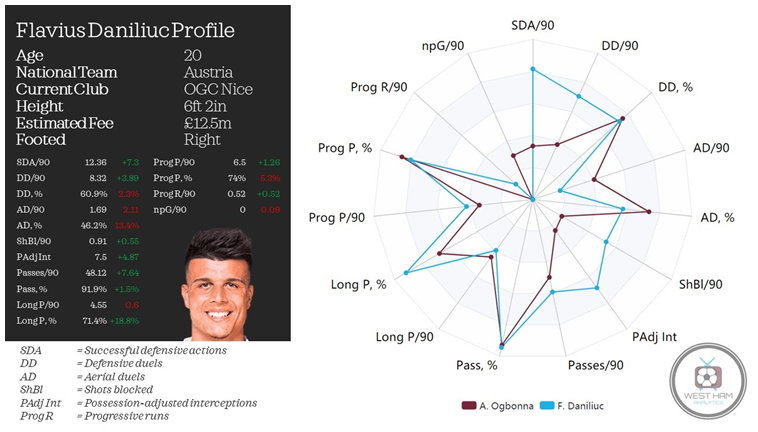 Flavius Daniliuc moved to Nice in the 2020 summer window on a free after his contract with Bayern Munich expired. For most 19 year-olds this would represent a big change but Daniliuc is no stranger to moving around having played for several different academies across Europe throughout his development (Admira, Rapid Vienna, Real Madrid, Liefering and Bayern Munich).

And Daniliucâs comfortability in traversing Europe is reflected in his flexibility across the backline. Strongest on his right-foot, Daniliuc is somewhat of a throwback in that he is happy playing in any of the defensive positions. The Austrian has appeared at left-back, left-centre-back, right-centre-back and right-back already this season for Nice. Earlier in his career Bayern had even been comfortable playing him as a holding midfielder in the UEFA Youth League. Viva Joey OâBrien.

We all know that David Moyes is a fan of players that are capable of playing in several different positions as it further enables him to stick to a smaller squad. Ben Johnson, Arthur Masuaku, Manuel Lanzini, Pablo Fornals, Nikola Vlasic, Jarrod Bowen, Said Benrahma and Andriy Yarmolenko have all been used in several different positions this season. So it was no surprise when Roshane Thomas of The Athletic suggested that Daniliuc was on West Hamâs radar.

While his flexibility is clearly a positive, Daniliuc isnât the most comfortable defender. He is recording significantly more successful defensive actions than any of our centre-backs (12.36) but these numbers are likely inflated by his appearances in the full-back positions and his defensive duel success rate of 60.94% is far more illuminating. This is 2% lower than our least efficient defender in Angelo Ogbonna, 13% lower than Kurt Zouma and not close at all to the other two centre-backs at Nice, Jean-Clair Todibo (72.95%) and Dante (76.77%).

Daniliuc isnât good in the air either. His 46.15% success from aerial duels places him inside the top ten weakest central defenders in Ligue 1 under a high ball (to have played >500 minutes) and put him well behind Ogbonna, who is recording 59.52% success from more than double the aerial duels (3.8 > 1.69 per 90). Aerial ability would usually be a non-negotiable for Moyes who has relegated Issa Diop to fourth-choice centre-back at West Ham at least in part because of his weakness under the high ball. And despite Diopâs struggles the Frenchman is still managing to record 10% more success than Daniliuc from aerial duels this season.

Perhaps passing and progressive ability might be an area to look for some positivesâ¦ Given that Daniliuc is regularly entrusted with playing in the full-back positions, youâd hope that this would be an area of strength for the Austrian. Thankfully, Daniliucâs overall passing accuracy of 91.89% does scan positively and is well complemented by the fact that an impressive 85.04% of his forward passes find their mark; significantly stronger than Ogbonnaâs 72.48% success. Daniliuc tends to avoid playing long too, something that West Ham fans would be keen to see with Craig Dawsonâs extended run in the side causing frustration as the Englishman looks to go long with 15% of his passes.

Concerningly though, Daniliuc seems to struggle to accurately place his backwards passes. When passing towards his own goal, Daniliuc misplaces one-in-ten passes, a rate that is significantly worse than Ogbonnaâs one-in-twenty despite the Italian being the weakest in this area among centre-backs currently at West Ham.

So what is Daniliuc really good at? Defending proactively does look to be a real area of strength with the Austrian managing triple Ogbonnaâs possession-adjusted interceptions per 90 (7.5 > 2.63) and Daniliuc ranks in the top 9% of centre-backs in Ligue 1 across the last calendar year for blocks too. With 2.24 blocks per 90 in this period heâs even outflanking Dawson (1.77), someone who weâve continually seen putting his body on the line.

Overall, itâs hard to see good reasons for signing Daniliuc this early in his development. With two years left on his deal at Nice, it would be wise to see how he gets on in this period and revisit this if heâs managed to nail down a starting spot and improve in some key areas.


Jackâs Rating: E
Daniliuc doesnât look to be a completely reliable defender at Ligue 1 level just yet so itâs virtually impossible to create strong arguments for why he would be able to handle the step up to the Premier League. He doesnât possess the true progressive quality required to excel in the full-back positions and isnât a good enough defender yet to be totally comfortable at centre-back.

Callumâs Rating: D
Heâs young and heâs tall but thatâs about all heâs got going for him. We should be looking for a progressive, left-footed centre-back to partner Zouma, not a right-footed centre-back who doesnât appear to offer any real improvement on Dawson. Iâm really not sure how or why we are linked with Daniliuc to be honest.