Ben Brereton Diaz is a Chilean striker currently playing for Blackburn Rovers in the EFL Championship. He has appeared 27 times in the league this season, scoring 20 goals and providing one assist. 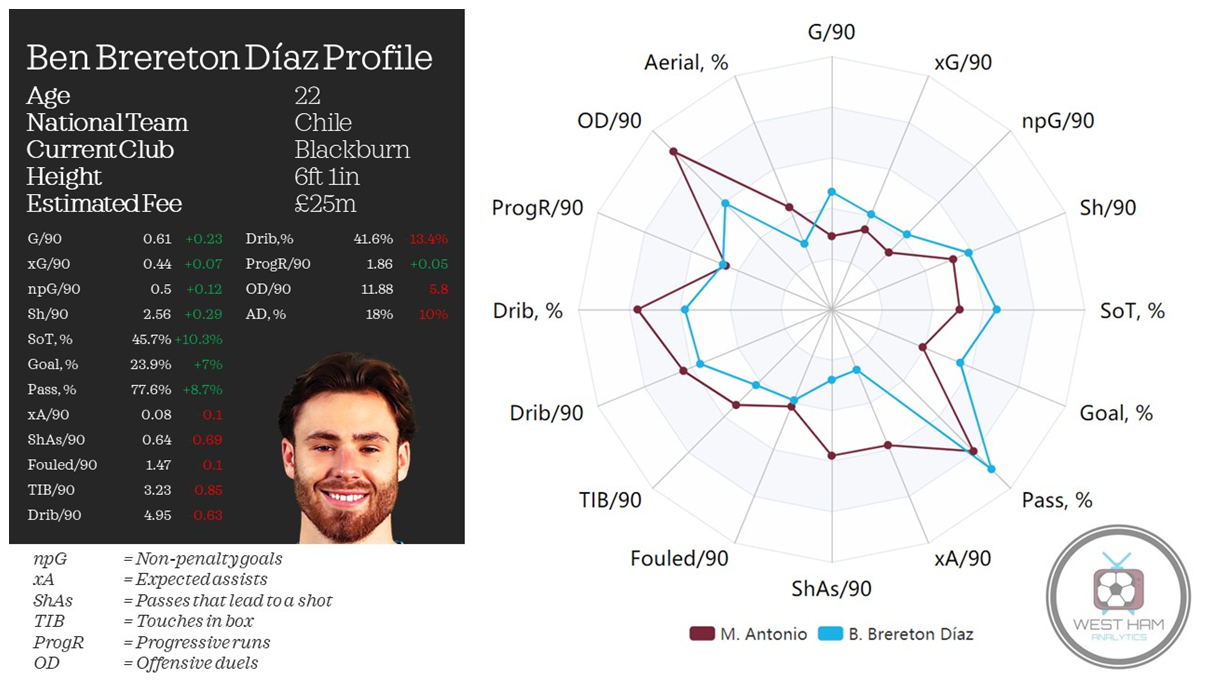 Ben Brereton Diaz has been on a wonderful journey over the course of the last year. Born in Stoke-on-Trent to an English father and Chilean mother, Brereton Diaz had always been eligible to play for the Chilean national side. And Chile were beginning to struggle with a lack of regeneration into a once great squad with key figures like Alexis Sanchez, Gary Medel, Mauricio Isla and Arturo Vidal hitting their mid-thirties.

So when a Chilean Football Manager player discovered Brereton Diazâs dual nationality and posted it on Twitter, it started the clamouring for the Blackburn Rovers striker to be selected for La Roja. Being 22, Brereton Diaz, Brereton at the time, was a much needed young forward and it didnât take long for the Chilean set-up to call him up to the national side. A goal and an assist at Copa America 2021 later and Brereton was now Brereton Diaz, a Chilean icon.

Brereton Diaz hadnât had the easiest road to this point having suffered rejections from both Manchester United and Stoke Cityâs academies before eventually arriving at Blackburn Rovers via Nottingham Forest and a Â£7.47m transfer. And after his big-money move back to Lancashire, things were initially difficult. Blackburn hadnât spent this kind of money on a player since signing Jordan Rhodes in 2012 and Brereton hadnât exactly done the business in the Championship the season before when he had been on loan from Forest. Just one goal and two assists in 25 Championship appearances didnât represent the kind of returns that made the Â£7.47m fee seem worth it.

So with Rovers fans not keen and Brereton struggling for form, that first season as a permanent Blackburn Rovers player would prove to be a major challenge. He struggled to even make the squad for the whole first half of the season and ended up making just 15 appearances in the league with only 592 total minutes played. Starting seven games, he scored once.

Danny Grahamâs move to Sunderland in the following summer thankfully opened up a squad space and Brereton Diaz managed to capitalise, making himself more central to manager Tony Mowbrayâs plans. Seven goals and five assists in 40 appearances represented some small signs of promise of what could be to come.

But it was after the summer with Chile that everything changed. Brereton had become Brereton Diaz, a South American sensation plastered across billboards and the central feature of a Pepsi advert; he was suddenly a star. And most impressively of all, he didnât leave this behind in Santiago when he returned to Blackburn for the start of the 21/22 season. Brereton Diaz brought his newfound confidence home and has been nothing short of exceptional since.

20 goals in 27 games so far this season equates to an average of 0.66 goals per 90, a 200% increase on his goal return of the season prior when he was scoring once every fifth game. This uptick in form correlates with a marked improvement in the quality of Brereton Diazâs finishing with the striker hitting the target with 48.1% of his shots this season, an increase of 10.9%. Unsurprisingly, his goal conversion rate has also shot up from 9% to a very impressive 25%, meaning that one in four of his shots is finding the back of the net. To put this into context, Michail Antonio has an inferior, though still respectable, goal conversion rate of 15% in all competitions for West Ham this season.

Another area of Brereton Diazâs game that would represent an improvement on Antonio is his security in possession. As good as Antonio is, one thing that is a consistent cause for frustration is how frequently he stifles attacks because of a poor touch or a stray pass. So far this season, Antonio has ceded possession an average of 12.6 times per 90, though he actually gave possession away 19 times against Leeds and Everton, and 22 times against Arsenal. Itâs Antonioâs passing that frequently lets him down, completing just 68.5% of his passes so far this season and turning out particularly poor passing performances against Arsenal (50%), Genk (50%), Manchester United (50%), and Liverpool (43%). Brereton Diaz, on the other hand, has a more impressive passing success rate of 77.6% and is only averaging 9 possession losses per 90, three less than Antonio.

Brereton Diaz can make things happen in possession too, and his metrics suggest that he would be more than capable of leading our counter-attacks. Remarkably, he is actually averaging an almost identical number of progressive runs (1.89) per 90 as Antonio (1.88) this season, an impressive return. Though dribbling is an area where Antonio is superior with the Jamaican boasting an impressive dribble success rate of 54.7% (>41.6%) whilst attempting more dribbles (5.64>4.95) per 90.

As impressive as Brereton Diazâs metrics and form are, there are still reasons to be hesitant as it remains to be seen whether he is genuinely this good or if this is just a lengthy purple patch aided by the quality of the league; weâve all seen Mitrovic struggle for form in the Premier League despite being on track to score almost 50 goals for Fulham in the Championship this season.

The fact that Brereton Diaz is considerably outperforming his xG, having already scored five more goals than expected this season, raises questions about the sustainability of this form, particularly given that he consistently underperformed his xG in every season prior to 2020-21. Brereton Diaz also isnât the most physically imposing striker and showed in his early days with Blackburn that he can shrink under pressure. But Moyes has proven with Jarrod Bowen and Said Benrahma that heâs got a good eye for Championship talent and, in going to play for Chile despite having never been there and not speaking any Spanish, Brereton Diaz has already proven much of what you need to know about his true mental toughness.


Jackâs Rating: C+
This reminds me a little of the rumours about Boulaye Dia. Brereton Diaz is on a fantastic run of form but thereâs no way to be sure that this is sustainable for the player and, for me, the Â£25m is prohibitive of taking such a big risk.

Callumâs Rating: B
If Moyes rates him then I'm inclined to agree given how well Bowen and Benrahma have handled the step up from the Championship. His form has been good and he's proven himself to be a decent finisher, but if the Â£25m fee is to be believed then I do question whether he represents the best value option out there.