aiwo Awoniyi is a Nigerian striker currently playing for Union Berlin in the German Bundesliga. He has made 27 appearances this season in all competitions, scoring 14 goals and providing three assists. 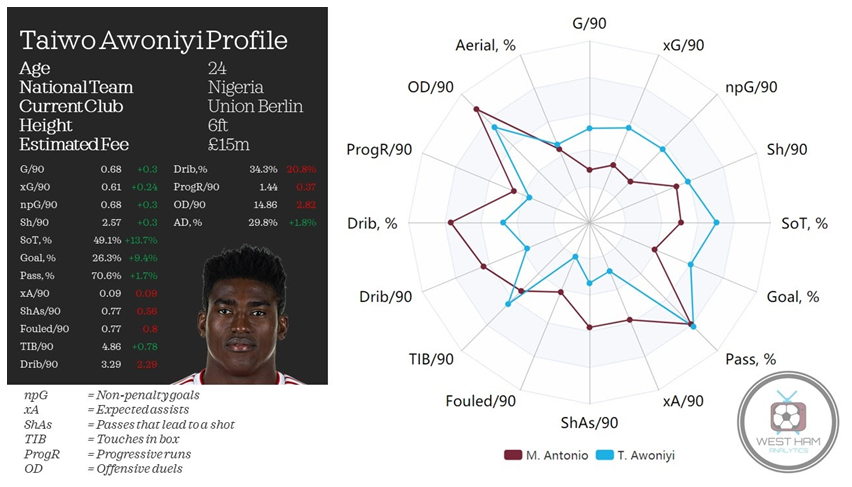 When thinking of Premier League clubs that often lose young talent, Chelsea would typically come to mind first. Kevin De Bruyne, Mohamed Salah and Declan Rice were all based at Cobham or Stamford Bridge at one point in their development and are now key players at other top half rivals in the league. Itâs much more difficult to think of players that have left Liverpool in recent times and made the Merseyside club regret it. And this is largely because Jurgen Klopp has often been keen to include Liverpoolâs younger players in the first team as soon as theyâre ready; Curtis Jones, Neco Williams, Rhys Williams, Harvey Elliott and Caoimhin Kelleher have all been involved at various points over the last 18 months. So it comes as somewhat of a surprise that they let Taiwo Awoniyi go.

Awoniyi, who starred at the Africa Cup of Nations for Nigeria this January, was allowed to leave Liverpool for Union Berlin on a permanent deal last summer for just Â£5.85m and this already looks like a mistake. The Nigerian scored against Sudan in his countryâs second group match but it was his all-action performance against Egypt that really caught the eye. And this wonât come as any surprise to watchers of the Bundesliga. Awoniyi has been outstanding so far this season for Union and key to their incredible performance so far; the Berlin club currently sit in a Champions League qualification spot in fourth.

It hasnât been a simple road to this point for Awoniyi though. Arriving in Liverpool from Imperial Academy in Nigeria, things changed dramatically quickly. Awoniyi doesnât come from a well-off background; heâd had to sew his boots together when they broke as a youngster before his exceptional talent was recognised and he started turning out for Nigeria at various youth levels, proving his ability on a much bigger stage.

He was the standout performer as Nigeriaâs U17s romped their way to a World Cup win in 2013, returning four goals and five assists at the tournament and virtually single-handedly winning Nigeria the quarter-final against Uruguay and the semi-final against Sweden. And moving up to the U20 squad in 2015, Awoniyi again performed brilliantly for the Super Eagles as they won the Africa Cup. Awoniyiâs two goals in an opening match against Senegal proved to be vital and although Nigeria would go out of the 2015 U20 World Cup at the Round of 16 stage to Germany, Awoniyi still came away with two goals and two assists from the four games played. It was after this that Liverpool took the plunge in bringing him onboard for just under Â£1m and over the course of several loans that followed, Awoniyi would eventually prove his worth.

His first loan with FSV Frankfurt in the German second division wasnât a great success as Awoniyi only appeared 14 times and could only score once but Awoniyiâs following loans with NEC Nijmegen and Mouscron in Holland and Belgium would pan out excellently. Returning 20 goals and 10 assists across those two seasons, Awoniyi earned himself a loan to KAA Gent, one of the top sides in the Belgian first division, in 2018. This would prove to be a major knock-back in the end though as Awoniyi struggled to dislodge Roman Yaremchuk from the starting lineup and the Nigerianâs resultant return to Mouscron halfway through the season wouldâve been challenging to accept.

Awoniyi wasted no time in reasserting his quality though as he stormed through an excellent second half of the season back in Wallonia, scoring 11 goals and providing three assists in just 16 games. And itâs this burst of exceptional form that gave Awoniyi his chance with Union Berlin.

The most eye-catching of all of Awoniyiâs metrics this season in Germany is his impressive goal return, particularly given that none of his 14 goals have come from the penalty spot. This goal return equates to an average of 0.68 non-penalty goals per 90 which is considerably better than Antonioâs 0.38 per 90. The Nigerian striker is actually scoring almost twice as regularly as our current number nine and outperforming his expected goal return (0.61) too. xG overperformance can sometimes be a bit of a red herring, as even the worst strikers can hit hot-streaks that donât reflect their true ability. In the case of Awoniyi though, the notion that he is a classy finisher is supported by his underlying shooting metrics, 49.1% of his shots in 2021-22 have hit the target and 26.3% of them have found the net.

Even more reassuring is the fact that Awoniyiâs impressive expected goals return is actually on a consistently positive trajectory. Over the course of the past three seasons, Awoniyi has always ranked in the 80th percentile for non-penalty expected goals amongst Bundesliga attackers. This is impressive in its own right, but the fact that both Awoniyiâs expected goals per 90 and actual goal return have increased year on year is very positive as it is indicative of a striker who is consistently developing their game. Awoniyi has shown increased composure and calmness in front of goal too, taking time to pick his spot and finishing with aplomb on either foot.

One thing that we canât track with metrics is a playerâs physical profile and this is a particularly important consideration when trying to find a player that is capable of deputising for Antonio. And Awoniyi has a very similar physical profile to our number nine. Heâs actually an inch taller than Antonio, has a similarly impressive turn of pace and possesses the requisite strength to play off the shoulder of centre-backs and shrug off defenders in front of goal. On top of those similarities, Awoniyi would also represent a slight improvement on Antonio in the air. His aerial duel success rate is only marginally better than Antonioâs but the quality of his headed finishing is better with the Nigerian consistently finding the corner of the goal with his headed shots or having the composure and reaction time to nod it between the keeperâs legs from close range (just take a look at this finish vs. Dortmund back in 2020-21).

Awoniyiâs explosive athleticism has been harnessed by Union Berlin manager Urs Fischer to great effect too. Though Awoniyi isnât the most frequent of pressers, he doesnât actually need to be because when he does press it results in the opposition turning over possession 31.6% of the time, ranking him in the top four percent of all attackers in Europeâs Top Five Leagues over the course of the last calendar year. If anything, this low frequency, high efficacy approach to pressing that Fischer has adopted and that Awoniyi has thrived under would make him a perfect fit in David Moyesâ very similar system.

One other similarity between Moyes and Fischer, beyond their pressing philosophies, commitment to crossing, and love of a goal-scoring central-midfielder, is that both managers look to make the absolute most out of set-pieces. At this stage in the season, West Ham and Union Berlin currently share the same expected goal return from set pieces (7.8) and Awoniyiâs presence in the area has been integral to the German outfitâs success from dead ball situations. A number of Awoniyiâs goals over the last two seasons have been a direct result of his excellent movement in the penalty area, a positional awareness that allows him to consistently get on the end of balls that have been headed down to his feet by teammates. In a team with the likes of Tomas Soucek, Kurt Zouma and Craig Dawson to nod it down, and players like Aaron Cresswell and Jarrod Bowen who are blessed with exceptional delivery, itâs fair to imagine that Moyes and Kevin Nolan could work wonders with Awoniyiâs predatory movement in these situations.

For all his strengths though, there are areas of Awoniyiâs game where he isn't quite as strong and one of these is ball-carrying. Though by no means a bad dribbler, beating his man at least once per game this season, Awoniyiâs success (35.2%) and frequency (3.57) of dribbling is inferior to Antonioâs (5.6 dribbles per 90 with 54.4% success). But Antonioâs dribbling and ability to beat a man with the ball at his feet would be considered elite by most forwardsâ standards, as you would expect from a converted winger that possesses such explosive physical attributes.

Awoniyiâs inferior dribbling ability might be more concerning for Moyes when considered in conjunction with his lower number of progressive runs (1.4<1.9) per 90, as it raises some question marks about Awoniyiâs ability to carry the ball up the pitch on counter-attacks. Awoniyi does make up for this with his exceptional off-the-ball movement though. The Nigerian has consistently shown that he is capable of dragging defenders out of position and successfully occupying pockets between opposition centre-backs as they backpedal to defend a counter. Were he to join West Ham, the onus of carrying could be put on other elite ball-carriers like Rice and Bowen while Awoniyi causes havoc ahead of them.

The other area of Awoniyiâs game that pales in comparison to Antonio is his productivity and shot creation in the final third. One of Antonioâs biggest strengths is his ability to create goal-scoring opportunities for his teammates, as is reflected by his 0.18 expected assist return per 90 and the eight assists heâs laid on in all competitions this season. By contrast, Awoniyiâs expected assist return this season is exactly half of Antonioâs, meaning that in his current form we could expect him to record an assist once every ten games. This relative lack of creativity is further borne out in the underlying numbers too, with Antonio recording more shot assists (1.39>0.8), key passes (0.71>0.45), and passes to the penalty area (2.18>1.11) per 90 than Awoniyi.

Frankly though, given that Awoniyi is outperforming Antonioâs non-penalty expected goal return by 0.26, considerably more than his underperformance of Antonioâs expected assist tally (-0.09), the potential uptick in goals would hopefully assuage any drop-off in creative output. A young and physically dominant goal-scoring number nine with plenty of top-flight experience already under his belt, Awoniyi seems like the perfect David Moyes striker.


Jackâs Rating: A-
Awoniyi is one of the best forwards weâve looked at this month. His physical profile in combination with his output make him an enticing option and at just 24 thereâs plenty of room for him to develop from this already positive platform.

Callumâs Rating: A-
Itâs a yes from me. We talked on this weekâs episode of the podcast about how difficult it is to find a striker that is similar to Antonio and whilst Awoniyi doesnât tick every box, heâs closer than most and can even improve on Antonioâs performance in certain areas.