Sergio Gomez is a Spanish left-back currently playing for RSC Anderlecht in the Belgian First Division. He has made 30 appearances in all competitions this season, returning six goals and 13 assists. 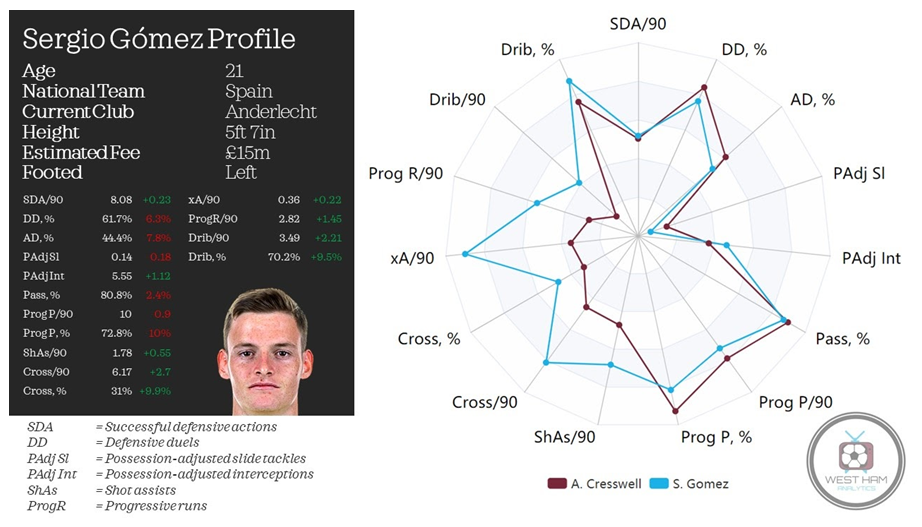 Originally a product of Barcelonaâs La Masia academy, Sergio Gomez arrived in Belgium last summer following a Â£2.03m transfer from Borussia Dortmund. The German club may now be regretting that decision because the 21-year-old has since gone on to prove himself to be one of the most exciting young full-backs in the world.

A quick scan of Sergio Gomezâs positions played makes for pretty hilarious reading; if covering Flavius Daniliuc had us saying âViva Joey OâBrienâ then Sergio Gomez has us fondly remembering the days of Jonathan Spector scoring two from midfield against Manchester United in the League Cup. So far in his career, Gomez has played 28 games at left-back, 26 games at left-midfield, 18 games in central midfield, eight games on the right wing, six games on the left-wing, five games in attacking midfield, one game at right-midfield, one game at right-back and one game up top. Clearly, heâs got it all.

Many of the more odd position changes in there will have come through Gomezâs appearances as a youth player; a good example being Spainâs usage of him as a goal-scoring central-midfielder or left-winger in the 2017 U17 Euros where he would score three as Spain came home with the trophy. As a fully fledged pro, Gomez has made 102 appearances but has only clocked up 5,602 minutes in this time and has therefore had little time to bed himself down in a first eleven with a set position. He didnât play for Barcelonaâs first team before his 2018 transfer to Dortmund and then only appeared three times for BVB, clocking up just eight minutes, before being sent out on a two-year loan to SD Huesca in Spainâs second tier.

Here, Gomez was primarily used for his attacking talent by then-manager Michel. Largely deployed as a second-half substitute and again in a multitude of different positions, Gomez struggled to really develop any strong rhythm and returned just one goal and three assists as Huesca romped their way to the Segunda Division title. And Gomezâs role diminished even further after Huescaâs promotion with Michel turning to the young Spaniard even less and Gomezâs minutes decreasing from 1,866 in the 2019-20 season to just 768 in 2020-21.

So, with expectations significantly lowered and Gomez not managing to work his way into a Huesca team that would ultimately fail to stay in the Spanish top flight, it would seem unlikely that he would ever make the grade at Borussia Dortmund and BVB were happy to sell Gomez to Anderlecht in the summer. Finally, it would be ex-Manchester City giant Vincent Kompany that would get the best out of Gomez.

Already in our good books for giving Josh Cullen his much needed chance to excel at top-flight level, Kompany saw something in Gomez that those previous managers had somehow failed to notice; his crossing is ridiculous. So, with the assured presence of Wesley Hoedt inside of Gomez, a solid enough defender for the level, Kompany was happy to afford his full-back the opportunity to get forward and wreak havoc in the final third. And thatâs exactly what Gomez has done. Scoring five goals and providing 11 assists in the league already this season, Gomez has recorded 16 goal involvements from just 24 games; ludicrous numbers for a full-back.

As mentioned, Gomezâs most dangerous attribute is his crossing. The Spaniard is able to consistently whip balls in with his left foot that encourage reluctance from both defenders and goalkeepers and allow for the predatory movement of a striker to reign supreme. This isnât the only cross in his arsenal though as Gomez regularly cuts the ball back to onrushing midfielders and has something of a trademark cross in his low, early balls towards the six-yard-box. His crossing from open play is actually significantly better than Aaron Cresswellâs, with Gomez recording 2.7 more crosses per 90 and maintaining 31% accuracy, 10% stronger than Cresswellâs 21%. Also beneficial to Gomezâs crossing is his ability to time his forward runs so that he finds space in advanced positions; here he combines both his pace and intelligence to create the room for his lethal crossing to have maximum impact. And if Gomez doesnât have the room to cross when receiving passes, heâs also comfortable taking his man on. Attempting 3.49 dribbles per 90 this season, Gomez is a far more frequent dribbler than Cresswell (1.28) and retains a much stronger success rate too (70.2% > 60.7%).

While Gomez might be having more impact than Cresswell in the final third from open play, the Spaniard isnât quite as impactful in build-up, a key area of Cresswellâs game and certainly where he offers most value to this West Ham team. Gomez does attempt a similar volume of progressive passes per 90 (10 < 10.9) but has a significantly inferior success rate of 72.8%, 10% behind Cresswell. One of the things that Cresswell is excellent at is skipping out the midfield and picking out passes straight into our forwards from defence, illustrated perfectly by Cresswellâs huge 7.57 passes to the final third per 90. Promisingly though, despite recording a lower average of 4.65 passes to the final third per 90, Gomez can match Cresswellâs accuracy from such passes (70.77% > 69.28%) which would suggest that all the Spaniard needs to do is increase the regularity with which he attempts to play these balls.

As well as recording an impressive number of assists this season, Gomez has also chipped in with six goals for Anderlecht which is obviously a healthy return for a left-back. It has to be noted that three of these goals have come from the penalty spot, though his 100% penalty conversion rate at senior level wouldnât go amiss in a squad that is still lacking a designated penalty taker. Gomez is something of a dead ball specialist outside the 18-yard box too with one of his other three goals this season coming from a free-kick, though it wasnât one that was in a shooting positionâ¦ The freekick in question was out wide in a crossing position but the quality of Gomezâs ball into the box caused so much confusion that it wound up in the back of the net. Weâve been dependent on Cresswellâs excellent set-piece delivery for a few seasons now, so finding a replacement who can take over this role would be an added bonus.

The final two goals are perhaps the most exciting though, both of which have come from Gomez taking up dangerous positions near the back post, waiting to get on the end of a deep cross or pounce onto any rebounds. Both finishes showed glimpses of the goal-scoring ability heâd exhibited earlier in his career, one a reflexive volley at a very tight angle, and the other a low, driven shot back across the face of goal and into the far corner. Bringing in a full-back like Gomez who can score as well as create goals would no doubt revitalise our attack and add a youthful verve to our left flank.

Though Gomez would clearly offer increased productivity in the final third, as would track with the cliche, he wouldnât offer the same security in defence. Cresswell has often been bemoaned for his defensive lapses but this is something that he had really tightened up on prior to the injury he sustained when he collided with the post in the Manchester City game earlier this season. At that point, Cresswell was recording his highest tackle success across the last three years, a 5% uptick on last season and a 13% uptick on the season before that. But the errors have trickled back in since he returned to the starting lineup, a period in which he has doubled his errors leading to goals total for the season (4). Even so, Gomez can outflank Cresswell here as the Spaniard has recorded seven such errors already this term. Three of those actually came in the same game, a 3-3 draw with Vitesse in the Europa Conference League Qualifiers.

Thankfully, there are some commonalities between the key mistakes that Gomez is making. Some are based around his lack of awareness in defensive situations, particularly from crosses, and others come from his tendency to turn side-on when attempting blocks, a bad habit that he must shake off given his small frame. Youâd hope this would give his coaches a good platform to work with him to solidify his game. And there are some defensive positives for Gomez too. He may only be 5â7â but he copes surprisingly well in the air by timing his leap well and showing no fear in challenging much bigger opponents for high balls; a 44.4% success rate from aerial duels isnât too horrific considering his size. And perhaps most positively, Gomez is good at impacting these duels even when he knows he canât win them as heâs able to contest fiercely enough to force misplaced headers that can then lead to simple second ball recoveries for teammates.

Gomezâs productivity in the final third from full-back is an excellent dimension to have within any side but his defensive lapses show that he still needs time to develop his game at top-flight level before he is ready to defend against some of the best wingers in the world. As of now, he could be a positive addition at wing-back in the Premier League but wouldnât quite be ready to step in as a first team full-back just yet.


Jackâs Rating: C-
Gomezâs impact in the final third and hugely impressive goal contribution record makes him immediately seem an enticing option but heâs still showing the kind of defensive naivety that would be brutally exploited at a higher level. Anderlecht is probably the right level for him to continue developing for now and heâll only improve as he gets more game time under his belt at left-back. One to return to in the future, for sure.

Callumâs Rating: B
Thereâs no doubt that Gomezâs pace, crossing, and ball-carrying ability would provide an improvement going forward. My main reservations are around his defending and physicality; lapses in concentration and over-commitment to tackles wonât win you any favour with Moyes, and I worry that he might struggle with the physicality of the Prem. He is only 21 though, and under the tutelage of Moyes and Cresswell it might well be worth taking a punt and banking on him fulfilling his undoubted potential.