I ended last weekâs review by saying it was high time that we tried something a little different and after our 1-1 draw with Newcastle, the general feeling really was one of disenchantment. Had our team peaked? Were we on the seemingly inevitable downswing?

In his post-match interview, David Moyes responded to those fears by saying that he would check to see if he and his staff were doing the right things to get the players back to the levels we know theyâre capable ofâ¦ Tomas Soucek hinted in the week that things had changed in training and on Sunday, the value of those changes was evident.

Sometimes, in order to fix something you have to break it.

Whilst West Hamâs 4231 had still provided points returns in recent weeks, productivity at the top end of the pitch had dropped off and security at the back had weakened. But the most alarming drop-off was undoubtedly around our invention in build-up. With the team becoming more and more one dimensional, it was time to alter things and Sundayâs fixture against Wolves brought about a wholesale change in approach.

Gone was the control-wrestling, possession-focused 4231, reliant on the ingenuity of our creative players to raise the tempo in the final third, and back was the distantly familiar pressing-orientated, high-tempo 5221. With fans squabbling over key pass numbers and debating which individuals were the best to break down an opposition defence, the team moved in a completely different direction. Who needs inventiveness against a set defensive unit when you can win the ball back in the final third and attack a disorganised defence quickly?

Utilising a back five rather than a back four allows for a number of helpful changes out of possession. And with Bowen and Lanzini flanking Antonio at the top of the pitch on Sunday, West Ham were able to employ a higher and much more engaged press. 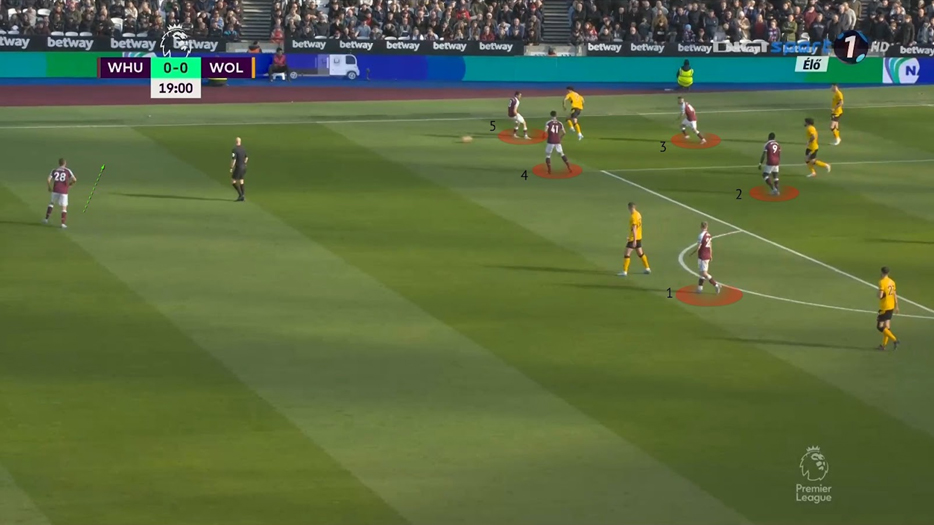 Five players push into the final third as Wolves try to build from the back and as Hoever attempts to play through the press, Soucek can come across and intercept.

Right from the start, our front three looked to get after Wolvesâ centre-backs and hassle them into turning the ball over with rushed balls into midfield or with forced long balls where we were confident in our centre-backsâ ability to win their individual duels. In fact, one of the major benefits of using a back five is that it allows your centre-backs to commit much more aggressively to higher duels as there is the extra man providing additional cover. 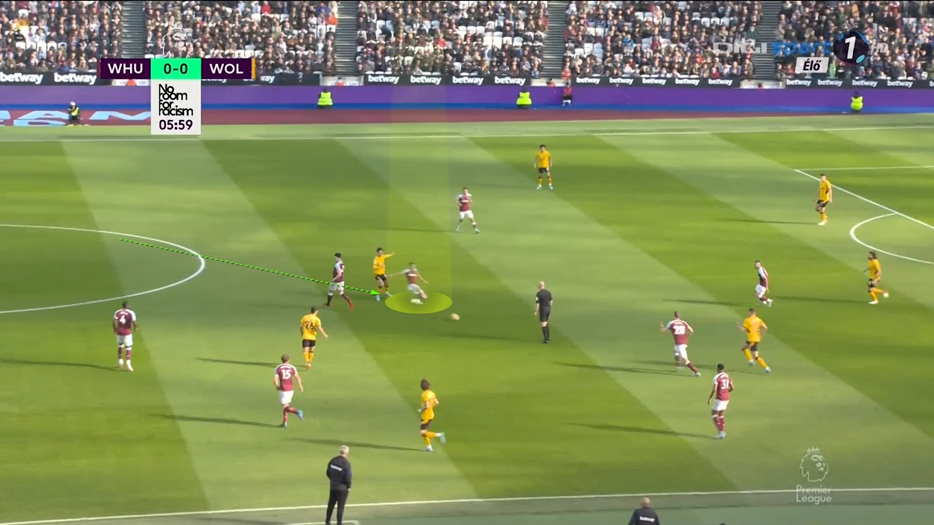 Here, you can see just how high Cresswell is able to get with the extra cover provided by Zouma and Dawson.

Across the last five games, West Ham have averaged 18.8 ball recoveries per match in the middle and final thirds combined. Against Wolves, the number of ball recoveries in these advanced areas increased by 86% to 35. And the benefits werenât only limited to our play without the ball, although we were much more comfortable in this sense and happy to cede possession to Wolves, the new system also allowed us to get bodies closer to Michail Antonio and perform more advantageous rotations in attack. 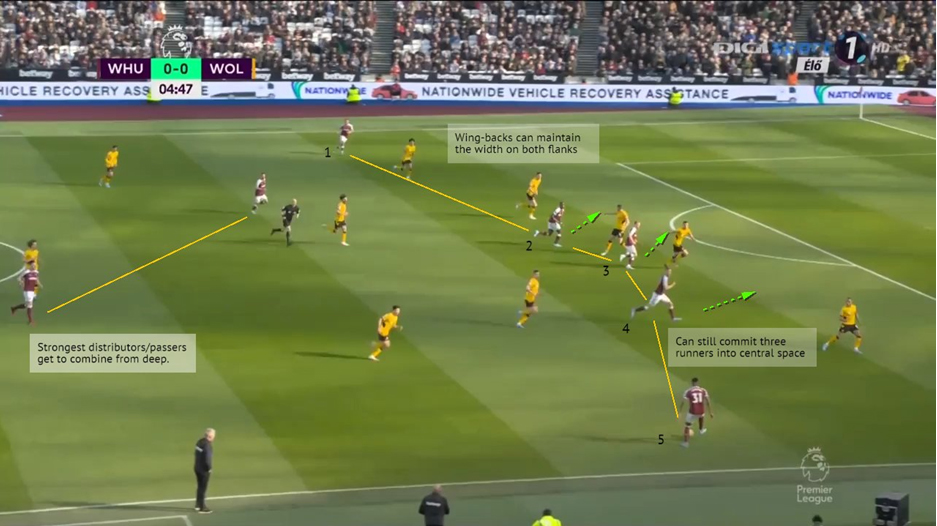 Explaining the improvement in rotations in one paragraph isnât easy but you can see, in the example above, that all three of our greatest goal threats get to attack the box together and our two best distributors get to combine from a little deeper. This is possible because it is only one circular rotation of the midfield and attack to arrive in these positions. Soucek from RCM to RF, Bowen from RF to ST, Antonio from ST to LF, Lanzini from LF to LCM and Rice from LCM to RCM. Everyone only has to move one slot across in order to accommodate this, rather than a set of more complex rotations that often leads to overcrowding on the left in the 4231 shape.

This is hugely beneficial for a West Ham team that has struggled to break lines in build up and maintain central threats in attack. Lanzini is able to drop-off into deeper areas to help progress the ball and Soucek can head forward to present an additional threat in the box without fear that Rice will be exposed to cover the midfield alone. And as I said in the post-match review thread, anything that allows Lanzini and Soucek to rotate more effectively is probably for the best right now.

The change in system gave us the benefit of having Fornals and Lanzini in deeper areas to help break the opposition press with both then able to arrive later in the final third and contribute the killer ball. Both were excellent on Sunday but Fornals in particular put in an outstanding performance, his best of the season so far, with his highest number of successful forward passes, dribbles and interceptions this season.

There are limitations to the changed system too though and one of the key issues to contend with going forward, if we were to stick with it, would be our lack of real competency in the wing-back positions. Though Fornals was excellent on Sunday, he was helped considerably by the fact that most of his duels were against the opposite wing-back, Ki-Jana Hoever, a player not renowned for his dribbling abilityâ¦ Only Allan and Ruben Neves have been dribbled past more times this season than Fornals (46) and were he to be isolated in a more disadvantaged duel against a tricky winger, he would face a lot more challenges out of possession.

And on the other flank, though Ben Johnson has proven himself to be a solid defender, his lack of creative ability and end product in the final third would be something that would really hamper us moving forward. With the back five, itâs often the wing-backs that find themselves free in crossing space, as the opposition are drawn narrow to contend with multiple central threats, yet Johnson was only able to successfully complete one of his nine attempted crosses on Sunday. And in sharp contrast to Fornalsâ creative output on the other flank, Johnson only completed one progressive pass (seven less than Fornals) and made just three forward passes from seven attempts, miles off Fornalsâ 16 from 21.

Though we have always been left-side focused under Moyes, this level of total imbalance in progressive and creative ability would surely be unsustainable. 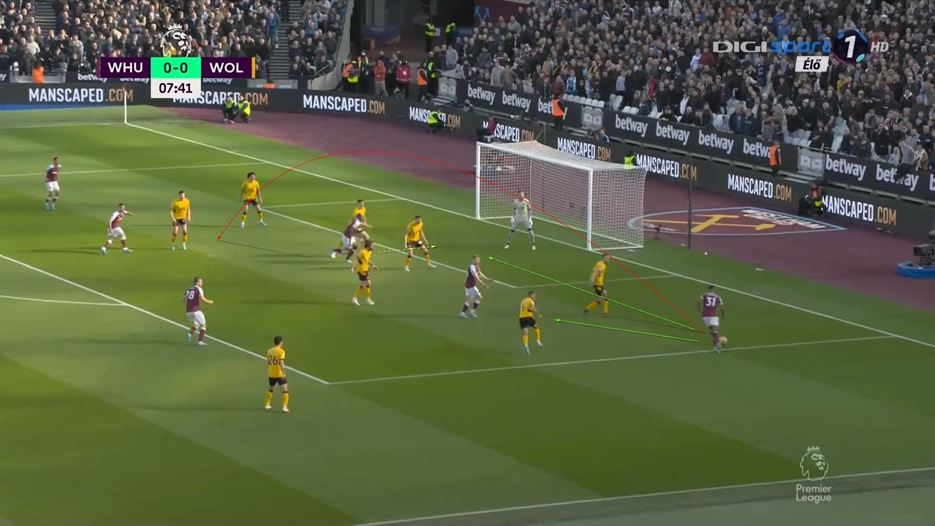 Johnson fails to connect a difficult cross to the back stick with an easier and more threatening ball across the six-yard-box clearly available.

Of the many things that Sundayâs match clearly evidenced, perhaps most clear was Moyesâ preference to change the shape and tactics on the pitch rather than change personnel. By the 85th minute we were all screaming out for one of the front three to come off as we tired dramatically towards the end. But Moyes had already made three subtle changes to the shape before that.

Starting with the 5221, the first change came at half-time when we reverted to a more defined 532 when our press was broken, with Lanzini dropping in alongside Rice and Soucek to block up the central spaces. Though you might initially interact with this as a more negative change in tactics, moving Bowen alongside Antonio actually made us more of a threat from quick counters launched from deep. Where in the first half we might have looked to build through the thirds on the deck using Fornals and Lanziniâs progressive ability, we were now happy to send the ball in behind earlier for Antonio or Bowen to spin and get us up the pitch quickly.

This led to probably the most high-risk high-reward period of the game as the midfield became more narrow and we lost a central presser on Neves, allowing the Portuguese midfielder to slide passes down the sides of the midfield and expose our wing-backs to 1v1s where the ball-carrier is already receiving at pace. Our goal actually came at the perfect moment as Wolves were just starting to get some better control. 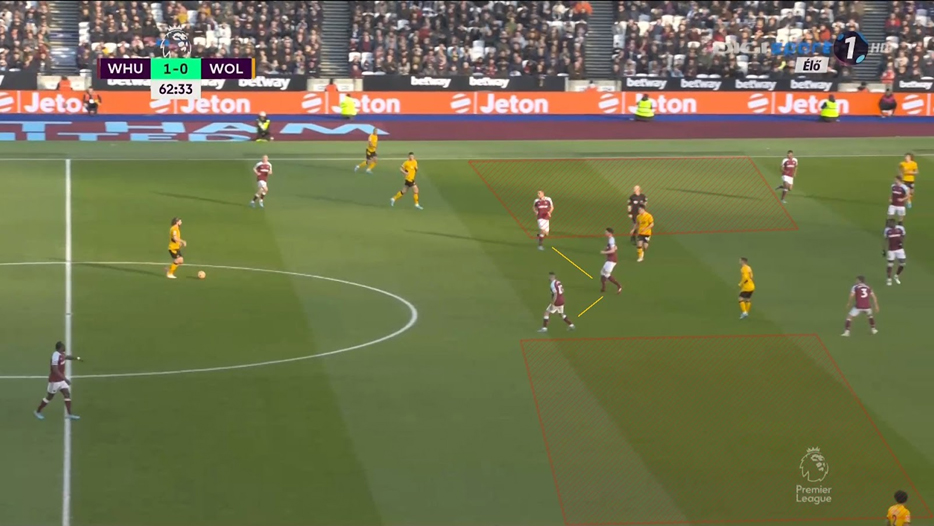 After the goal came another switch, to 5212, with Lanzini slotting in between the midfield and the attack and regularly heading forward into somewhat of a false nine role with Antonio and Bowen splitting wide. This allowed Rice and Soucek to return to their most comfortable midfield shape where they cover the spaces fantastically together and it also gave us some of that control over Neves back, with Wolvesâ chief creator afforded much less time on the ball.

Itâs worth mentioning here just how valuable Lanziniâs flexibility and footballing intelligence is. Arguably the most important player in the team at the moment, the Argentine seamlessly transitioned between the left wing, central midfield, number ten and up top always keeping the team ticking and maintaining the highest efficiency when pressing (55.6%), picking his moments to race up and nick the ball perfectly.

It was as he tired that the spaces in front of Rice and Soucek began to really open up and we had to drop deeper and make another alteration to the shape. Here, we switched to a more familiar 541 low block to completely deny Wolvesâ progression into dangerous areas and force diagonal balls into the box which Fabianski can happily claim all day.

So, though it wouldâve been nice to see some changes to the frontline a little earlier to freshen things up and stop things feeling quite so desperate towards the end, there were proactive switches to the shape throughout, initially to maximise our threat going forwards and then to protect our lead once ahead.

Many doubted Moyesâ ability to turn things around after the Newcastle game as we increasingly looked more stagnant in the weeks leading up to Sundayâs win, but Moyes kept his word to review his own processes and came up with an effective change in approach to nab us a crucial three points against a fellow European-spot-contender. The challenge now is over how to proceedâ¦

With six games in little over two weeks starting tomorrow, the fitness and depth of the squad is sure to be tested. And Moyes will have to decide whether this shift to a more front-footed and energetic style without the ball is sustainable over this period. A period in which our season will ultimately be defined as we compete to get the results required to maintain a top-six challenge in the Premier League and progress in both the FA Cup and the Europa League all at once.