If you are a regular attendee at the London Stadium, I hope that you have not had to deal with the ongoing saga that has plagued the female toilets this season.

The unsavoury activity of groups of âladsâ using the womenâs toilet for differing activities, came to a head on the evening of our loss to Eintracht Frankfurt.

What should have been a momentous and historic occasion for myself and my daughter Skyla, who is 12 years old, ended with resentment and bitterness due to an issue the club is all too well aware of. 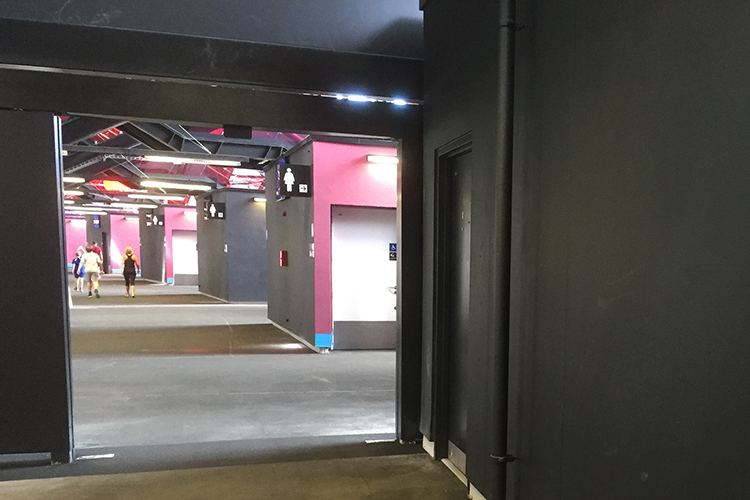 Disturbing incidents which the club are yet to respond to, says Trevor

As Skyla attempted to use the female toilets by block 130, a drunk male entered, much to the shock of the rest of the females within it. Despite there being a plethora of stewards around, no-one was managing or monitoring the toilets, as so often has been the case this season at our home ground.

I asked the fan to leave and whilst enduring a load of verbals from the inebriated fan, he eventually left, much to the relief of my daughter and the other women trying to use their specified facilities.

When the stewards near the toilet, who seemed to be just standing by exits, were asked why they donât stop men in the womenâs toilets, they merely responded with, âthatâs not our job.â

In addition to this, on the way back to their seats a gang of nine London Stadium stewards were walking through the concourse. The supervisor of the group seemed to have a total disdain and disregard for fans, spilling a fanâs drink, refusing to apologise, and was belligerent and aggressive.

As much as harking back to the days of yore is pointless, it does beg the question, what has happened to us as a club? Gone are the days of knowing your steward by name and having a laugh and joke as we used to, that is for sure. Nevertheless, when did we lose the class and gentlemanly behaviour that is synonymous with the East End?

Ladies, children, the vulnerable. These are the people we historically look after and that is why we have the reputation we do. This season, there seems to be more and more groups of lads, charged up and lairy, throwing beer and giving no respect to the âunwritten rulesâ of representing your club.

No-one wants a totally sanitized experience, but frightening women and children is where we need to draw the line.

Of course, as the club are aware, this is not an isolated incident. The club have proved they are cognisant of this situation by placing stewards on the toilets at some matches previously in the Premier League. However, as is often the case, the effort is unsustained and merely a token attempt and we find ourselves with a repeated situation, one that is only going to end badly.

I put this out to the fans and discovered a number of them have suffered similar experiences. I then took this directly to the club on 29 April. The club initially showed some concern and asked for timings so they could reprimand the individual in this situation.

Yet despite repeated attempts to explain this is an endemic problem that we need to have a resolution for next season, the issue was left with the club's Supporter Liaison Officer and his team for the 14 days the club require to investigate.

At the time of writing, it is 1 June. Despite attempting to contact the club once more, I has yet to receive any form of satisfactory response - or indeed a plan of action to safeguard our kids, at our home ground next season.

As such, Hammers United will take up the fight and represent the fans, as this is an incredibly serious matter.