One of the most important positions for West Ham to recruit in this summer is left-back.

Aaron Cresswell suffered patchy form last season and seemed to lack mobility after sustaining a back injury against Manchester City that kept him out for nearly two months. Arthur Masuaku was largely awful, putting in horror-performances in losses to Spurs, Arsenal and Leeds. It's disappointing then, with just one day to go until the 2022/23 Premier League season gets underway, that West Ham still haven't managed to sign a new full-back.

Whilst strengthening the side in other areas, David Moyes' side are heading into the new season with a much weaker group of full-backs available. Ryan Fredericks, who occasionally deputised at left-back last season, left the club on a Bosman to Bournemouth and Masuaku has headed out on a season-long loan with Besiktas in Turkey. This leaves Moyes with just Cresswell, Ben Johnson and Vladimir Coufal as senior full-back options for the upcoming season. It is absolutely crucial that the Hammers target a new left-back over the next few weeks before the window shuts.

With fans suggesting that the market for left-backs is too weak to be able to add genuine quality this summer, we've drawn up a list of left-sided defenders that we feel would do just that. While there aren't many big names up for a move, or the ones you'd heard of have moved already, there are still plenty of great options available. 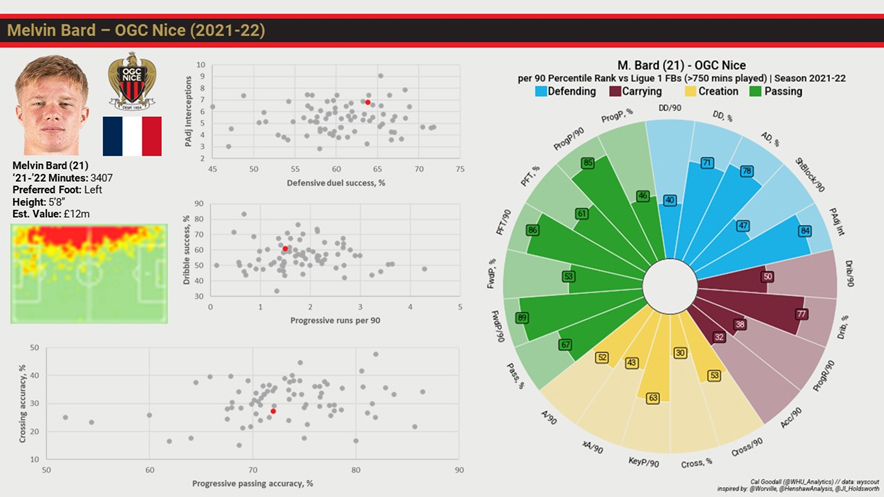 A product of the Lyon academy, Melvin Bard was let go for a ridiculous fee of just Â£2.7m last summer with OGC Nice the beneficiaries. The young Frenchman has performed brilliantly since his move and is incredibly similar to Cresswell with huge impact in build-up for his team. He'd be a perfect option to replicate Cresswell's ability to break the lines in the first phase or bend inch-perfect balls into the channel for the striker to run onto. He does currently lack a bit of confidence in the final third but with his already impressive passing range and reliable defensive work, the 21 year-old would be a perfect option for the future. 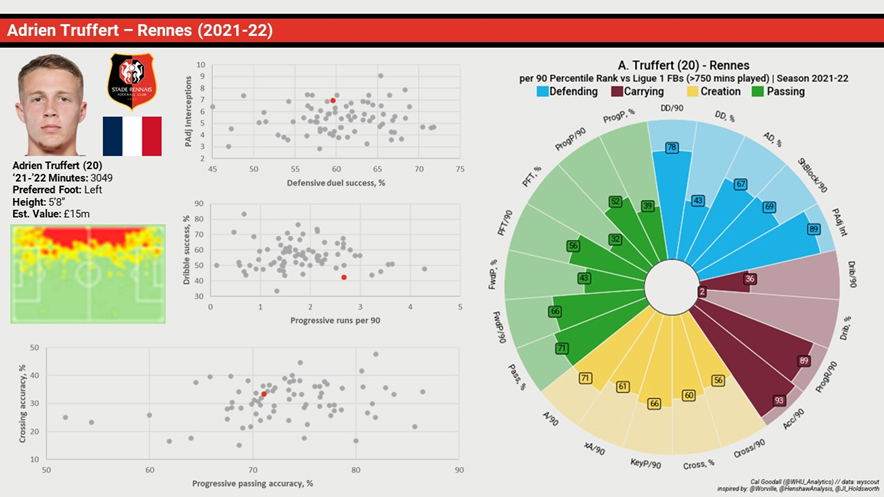 Another player off the Rennes production line, Adrien Truffert has wowed fans with his relentless energy down the left flank in Ligue 1. The 20 year-old has a ridiculous engine and is constantly flying up the wing in similar style to Andy Robertson at Liverpool. West Ham fans have been calling for an overlapping threat on that side and Truffert would certainly offer that. Though, having already recruited Nayef Aguerd from the French club, it might be a stretch to go after Truffert as well (can we have Martin Terrier and Lovro Majer too) but the two players already having a strong relationship would be a huge benefit. 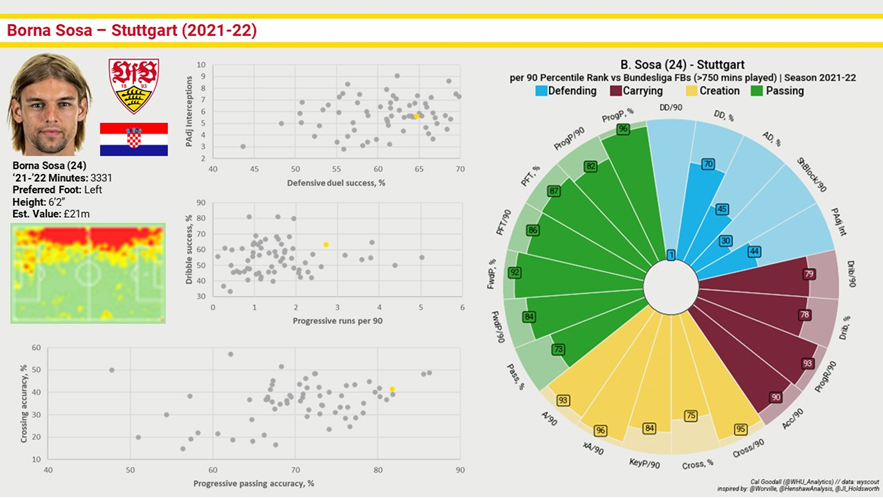 Every club in need of a left-back this summer is after Borna Sosa. His radar says pretty much everything you need to know â the Croat is exceptional as a wing-back. Returning eight assists in a Stuttgart side that barely avoided relegation last season was a hugely impressive return, and it's hardly surprising that Sosa has attracted the attention of Pep Guardiola with Manchester City considering him an option to replace Oleksandr Zinchenko. He would be a great addition to Moyes' side at wing-back should the Scot choose to deploy a three-at-the-back system more regularly next season but there are still big question marks over Sosa's ability to play a more traditional full-back role. 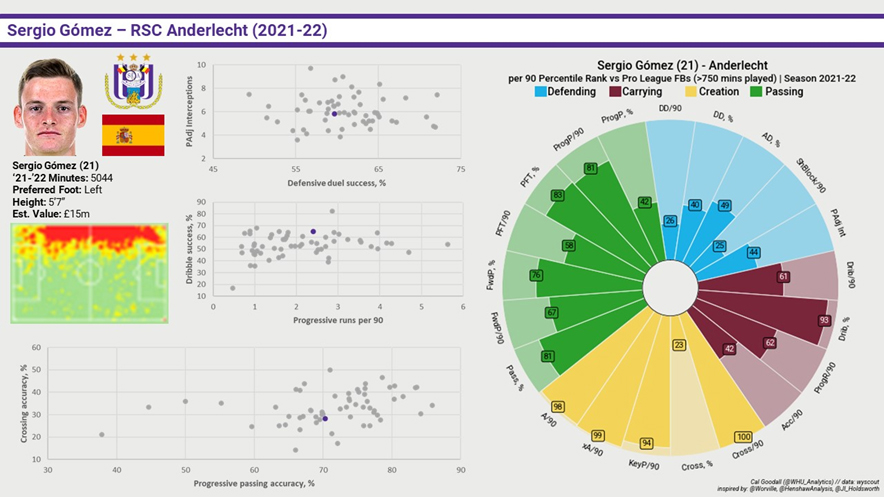 Sticking with the theme of wing-backs linked to Manchester City, Sergio Gomez is another standout option. The Spaniard had an incredible year in Belgium last season, finally delivering on some of the potential that made Borussia Dortmund pinch him from Barcelona's La Masia academy back in 2018. Gomez is capable of playing in a multitude of positions â so flexible that when Cal and I covered him in a scout report back in January we gave him the honour of a comparison to Jonathan Spector â but he has really excelled since settling down at wing-back. A set-piece specialist, Gomez provided a remarkable 15 assists last season and, despite being a little on the short side at just 5'7â, he would be a wonderful addition to Moyes' team. 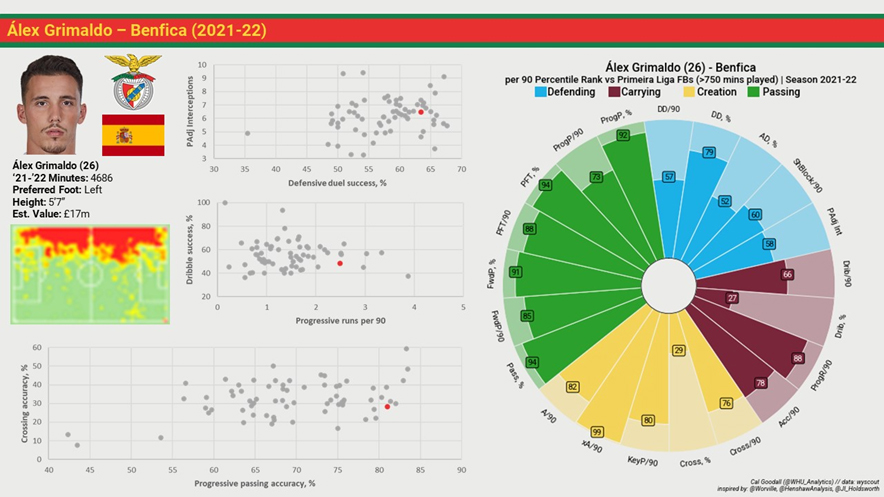 Another player that has been linked with several high profile moves, Alex Grimaldo would certainly represent a premium option for West Ham. The Spaniard has been heavily linked with Arsenal this summer and with a deal yet to materialise, one wonders whether West Ham could sneak in and pull off a real transfer coup off. Comfortable stepping inside into midfield or overlapping on the left flank, Grimaldo's eight assists last season were incredibly diverse with through-balls, low crosses, cut-backs and set-pieces all featuring. He's put up impressive numbers in all areas in Portugal and the fact that his xA was 4.13 above his final assists total suggests that, with better teammates, Grimaldo could be even more productive. The 26 year-old (he's that young!?) is entering the final year of his contract with Benfica and would potentially be available for a reduced fee. 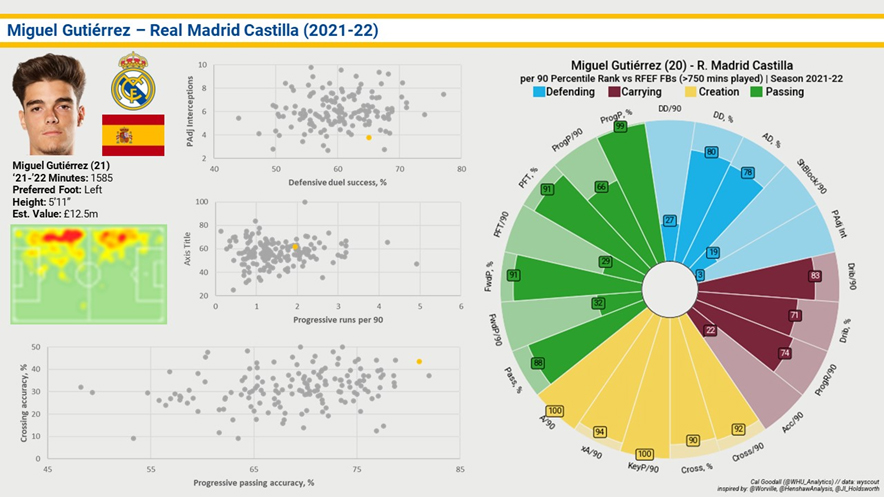 Sticking with Spaniards up next is Real Madrid youngster Miguel Gutierrez. It's difficult to fairly assess Gutierrez's data as it's taken from his performances with Real Madrid Castilla in the Spanish third division, the highest tier that Spanish B teams are allowed to enter, but the 21 year-old has already impressed enough to have made ten appearances for the Real first team. His fantastic ability on the ball has won him plenty of admirers and a quick glance at his assists last season reveal his excellent eye for a pass in forward areas and his brilliant crossing ability. As I'm writing this, it appears that Manchester City might've gotten there first again though as Gutierrez is expected to sign for City Football Group side Girona in the coming days... 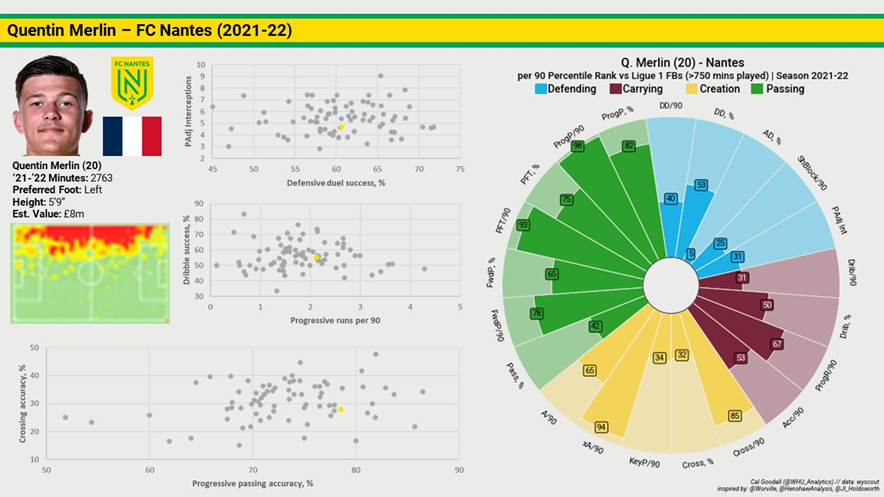 Back to French youngsters and the last of that trio is Nantes' Quentin Merlin. Less of a standout option than Bard or Truffert, Merlin has flown under the radar a little bit despite performing superbly in a resurgent Nantes team. Much like Cresswell, the 20 year-old is brilliant in build-up and ranks in the top 6% of full-backs in Europe's top five leagues when it comes to progressive passes. Creating 2.62 shots per 90 is no mean feat and Merlin has shown such competency on the ball that Nantes manager Antoine KombouarÃ© even played him in central midfield at the end of last season against Lyon â a game in which Merlin scored with a rasping shot from the edge of the box. Though perhaps not a first choice option, Merlin would still be an excellent acquisition and would ease the transition away from Cresswell with his progressive ability. 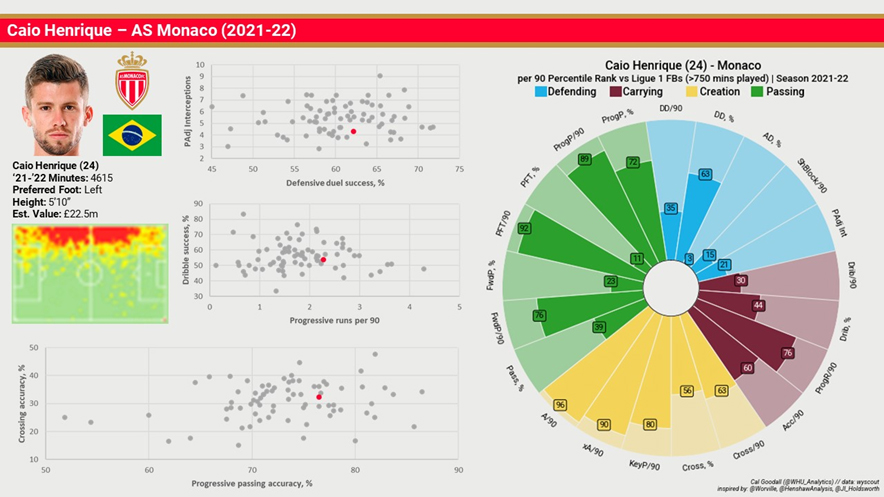 Last up is Brazilian Caio Henrique. Another young player performing well at left-back in Ligue 1, Henrique is an additional attacking option. The Brazilian isn't the safest defensively but would potentially be a great option at wing-back thanks to his productiveness in the final third. He returned 13 assists in all competitions last season, overlapping to devastating effect down Monaco's left flank, and ranked in the 94th percentile of full-backs in Europe's top five leagues for total xA generated thanks to his attacking enthusiasm and crossing wizardry.