Preview Percy is about to undertake his own international break. But before he goes we made him do this. Something we are regretting already...

Next up we play host to Brighton & Hove Albion. Kick off is at 2pm or, if you are engaged in top level research into European football issues at a bar in Rhodes like Daisy and myself it will be 4pm. Loads of engineering work meaning thereâs a reduced service between Liverpool Street and Shenfield and all C2C trains terminating at Fenchurch Street. Plus the usual stuff going on between Upminster and Grays. Check as ever before you leave. 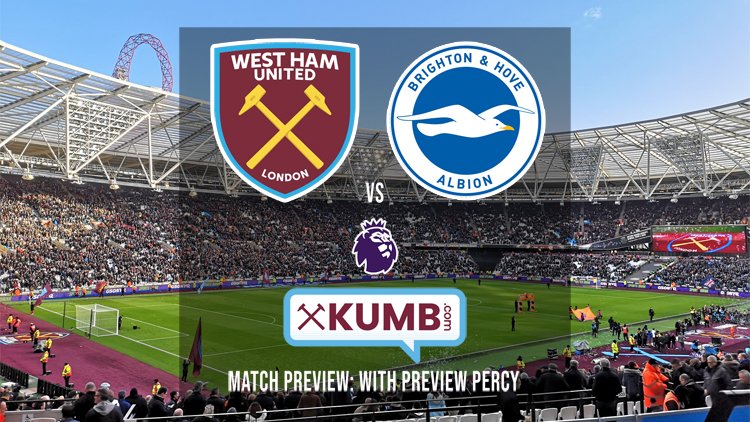 So Brighton and Hove etc. They gave everyone a good laugh on the opening day by walloping the Salford Whingers 2-1 at the Theatre of Tacky Marketing Slogans. They looked quite good in doing so â one goal that started off down by their own corner flag drawing some appreciative murmurs from these parts. However, having seen the Salford lot against Brentford one might be tempted to throw a bit of context in there. Having said that, by all accounts they were the better side in the 0-0 draw against the Geordies last weekend so they are good value for their eighth place (effectively joint third) at the moment.

Daisy tells me that, perhaps surprisingly, they havenât been over-active on the transfer front, with the major moves so far being on the departures side of things. However, with the window still open for a couple of more weeks one wouldnât expect that to remain the case. Particularly as they have possibly the thick end of Â£90m sitting in the kitty after the sales of Bissouma to Tottenham and Curcurella to Chelsea, the latter transfer occurring after Man City pulled out of the bidding. Apparently as part of that deal Brighton took in Chelsea youngster Levi Colwill on loan for a year. As a central defender some have compared him to John Terry but we wonât stoop to personal insults here.

The one proper transfer in so far has been the arrival of Paraguayan striker Julio Encisco whose fee was a reported Â£9.5m paid to Libertad, his first club. Unlike Colwill who got on as a stoppage time sub at Old Trafford, Encisco has yet to make his first XI debut for the Seagulls and at the age of 18 is presumably one signed with one eye on the future, though he does have full international caps for Paraguay.

Their sole goalscorer so far (at least they have one I guess) is Pascal Gross, a player who every season makes me resolve to work out how to get that odd âBâ-shaped letter the Germans use for âssâ on my laptop. Gross was on target and contributed an assist in the 3-1 defeat down at their place at the end of last season.

Top scorer last term was Franco-Argentinian Neal Maupay. He notched 9 across all competitions in 2021-22 despite an indifferent second half of the season. This saw him dropped for a couple of games after he missed a penalty. Iâm guessing that Declan has little to fear in that respect.

And on we go to the Wild & Wacky World of Association Football and the streets and pubs of Kingston Upon Thames were full of excitement at the ânewsâ that multi billionaire Elon Musk had announced that he was to buy Man Utd. After a while Musk said that his announcement had been a joke and that stand up comedy was a side interest. Oh my aching sides. Actually in a way itâs a shame that the announcement wasnât genuine. As someone who lives nowhere near Manchester who knows absolutely nothing about football he would have made an ideal candidate for a supporter-owned club.

And so to us. And we say "wilkommen" to Thilo Kehrer, a much needed addition to our depleted defensive resources who arrives from PSG for what appears to be a bargain Â£10m or so. Not sure of his availability at the time of writing but one hopes that he will be in sooner rather than later based on Sunday.

Although we didnât play that well I didnât think we played that badly either. What we didnât get was the rub of the green â particularly from the referee who seemed incapable of independent thought throughout the match. The disallowed goal should have stood with Antonio being obstructed more than anything else. The ref must have been the only person who didnât see the handball for the penalty and then, having given it proceeded to bottle the red card that was due.

As usual Dermot Gallagher did his usual post-match defence of the indefensible saying that the yellow card was correct because the handball didnât âdeny a goalâ. Note the subtle rewriting of the laws of the game which refer to denial of âgoalscoring opportunityâ. It seems when referees get it wrong we now have to rewrite the laws to make it right.

Elsewhere on the pitch we had no luck at all, conceding a goal that the scorer knew nothing about and the metalwork assisting the referee in ensuring that a result more reflective of the game as it went didnât happen. As for Forest, whilst one doesnât begrudge them their celebration of a first Premier League win in 25 years, when the hangovers have settled Iâd be a bit concerned that a seasonâs worth of good luck had been used up all in one go.

Team news is a bit difficult this week as I have no idea who will have survived Thursdayâs match at this point. Aguerd is out, obviously but Dawson and Ogbonna are edging to return â Dawson probably the more likely of the two. We could do with one of those back, depending on Kehrerâs availability, it being all too obvious that Johnson is being played out of position at the moment.

So to the prediction. Theyâre on form. Weâre not and they are a bogey team. However, if we can get a decent start to the game that could make all the difference. On balance I think however that a draw might be the most likely outcome. So the Â£2.50 I was going to spend on buying Man Utd (I want the change mind) will instead go on a 1-1 draw.

I have unhappier memories of this game than most having succumbed to a nasty case of food poisoning, meaning that I listened to the match in the bathroom of a New York hotel room. You donât get that level of insight on the BBC. Soucek opened the scoring and we had numerous chances to double the lead, including having a goal chalked off when Antonio was harshly adjudged to have interfered with play from an offside position. Predictably Maupay managed a late equaliser.

Clown who decided to gift Tottenham two goals last weekend in their spat against Chelsea. It would have been interesting to have had him forced to explain why pulling someoneâs hair is not violent conduct but I suspect stringing two coherent words together would be a problem. And Mason on VAR is just as bad.

Looked to be on form up at Old Trafford.

Last week we asked True or false: Viborg was named after Lars Viborg, the 8th century brewer who invented the inverted firkin. The answer was of course âFalseâ. Congratulations to Mrs Dymphna Fortified-Wine of Foulness who scored a bonus point for knowing that it was Wat Drabney who had that honour.

This week we ask: True of False: The number of light bulbs illuminating Brighton Pier is 2,267,709.