Homage to the great unwashed

So theyâve given us the collective ball back, all that nonsense about not being trusted not to sing rude songs has gone out of the window.

If the great football unwashed couldnât be trusted last weekend to show some respect, why are they being let loose on the unsuspecting population next weekend, a day before the Queenâs state funeral?

Your guess is as good as mine, all Iâll say is that Mondayâs Premier League meeting with plod produced a lot more logic than the one football authorities had with government last Friday.

So we will be up at Everton on Sunday, on the TV, and we will behave ourselves, I promise.

I spent Friday heading back north after that remarkable emotional evening of the opening Europa Conference League against Steaua Bucharest. Thatâs what FCSB are in my world; those of us who witnessed their horrific play-for-penalties, defensive display in the 1986 European Cup Final against Barcelona still bear the mental scars. Two hours of anti-football and then a 2-0 penalties win over Terry Venablesâ side.

My journey was spiced by lengthy chats and messages with mates who seem to have some idea what was happening regarding football last weekend. Now at first I blamed the FA and football authorities generally for the blanket ban on football from the Premier League to grass roots kids matches.

The Premier League and EFL tried to second guess what establishment media would think. Ban or no ban, take your pick. Damned whatever you chose. So they chose respect at all costs - and then found themselves blasted by that same media for missing out on the chance to showcase across the globe how well we do such things, thanks entirely to the way West Ham and their fans handled last Thursday. High praise all.

The spontaneity of the anthem, sung by 33,000, the respect and volume of noise was special. It made me proud of our people. It flashed around the world, I had friends from the States and Australia saying online how special it was, how well our fans had handled the knowledge that our Queen had gone. Most of us found out about 6.00pm, in the pubs and bars.

The clubâs media department cobbled together pictures, films and songs, to mark the occasion. That shot of Sir Bobby and Lizzy with the World Cup brought tears to the eyes. There was nothing better to underline the affection of our fans, the East End, the old timers who remember the King, Queen and princesses, during the Blitz.

At a very young age my east London family let me know how the royals had stayed in London to be bombed, just like the East End. Thatâs why West Ham has this reputation of loving the Monarchy. No better club could have been in the vanguard of respect and gratitude last Thursday.

I even sang the anthem myself - me, a republican all my life who wants the monarchy consigned to history in the modern era. That doesnât mean I wish any ill of the current royal family but I surprised myself by feeling lost and confused by the time I got back to my hotel - a stay forced on me by the horrific Avanti scrapping late night trains back north. Sorry, itâs a very sore (and expensive) point.

It dawned that I was not only sad at the Queenâs passing, but also that my entire life was passing in front of me. Iâm old enough to be on my third monarch now although to be fair, I knew little of George VI. I donât do flags and anthems, but I know how to be respectful (Iâll stop now before the thought police get on my case).

If only the football authorities had allowed games to continue, to allow the working man in the street to say his farewell. But no, they were terrified that someone would let them down.

The decision to call off football and hide behind the sofa, was not football's. Our old mate Martin Samuel in the Mail revealed that although the government had said sport should continue, apart from funeral day, the infamous department of digital, culture, media and sport had privately briefed journalists that they wanted and expected football to be stopped.

They weren't brave enough to say that publicly, but it left the FA and football authorities, with no option. It was never about respect.

So we all sat in our hands while the posh sports carried on as usual. Me and the lad had promised to take my seven year-old granddaughter to see a local non-league game on Saturday, we managed to get her to West Ham last season and she loved it.

So we couldnât go and kids all over the country were told their games were off. So what did we do? Took her to the cinema instead. The logic was utter nonsense.

Cricket, horse racing, golf, rugby - sports my old fella called posh - got the go ahead, but not the rough house football lot. Canât trust them to behave, can we. No problem on Thursday at the London Stadium, though?

I finally lost patience with it all around tea time on Sunday, having watched two days of cricket from the Oval and then all that booing from the punters because their game could not continue in the half light.

The great irony of the Test being allowed to continue slowly came to light. The Oval is owned by the Duchy of Cornwall, the nest egg currently being passed from the new King to his son.

It seems Surrey CCC and the ECB both contacted the Duchy to make sure they could open the Oval and they got the go-ahead. (Pass the Duchy to the left hand side, maybe? Sorry, Iâll get my coat.) By royal approval. Nobody wanted sport stopped, even the royals. But football was put in cold storage because we couldnât be trusted.

You know what, I donât care if Liverpool fans canât be trusted. Let them boo the anthem, let it be broadcast worldwide, see what damage that does to the brand. Let the other clubsâ fans show the way to behave, if thatâs what the authorities are bothered about.

To be honest, everybody has the right to protest. Liverpool have their reasons, they canât forget the âmanaged declineâ policy a previous government had for their city.

If that was the fear that cost many thousands of football fans and players their sport, I despair. Liverpool are planning their night of respect on Tuesday ahead of their Champions League clash with Ajax at Anfield. It'll be interesting to see what happens when the anthem is played.

I doubt whatever happens it will detract from these days of mourning. I have been pointed towards Voltaire, a French philosopher Iâm told, and not the Marseille full back that David Sullivan and his agent mates keep trying to buy (I jest). He said something like, "I donât like the pony you keep spouting, but I will defend to the death your right to spout that pony". So letâs move on, just like football authorities should have done on Friday.

When we start up again at the weekend, policing issues will stop Liverpoolâs game at Chelsea and Manchester Unitedâs home game with those lovely people from Leeds. Letâs leave it there, although there's something poetic about that.

On a more sombre note, itâs worth recalling that back in 1952 when the old King died football continued. On the night he died, 6 February - a Wednesday - we played and contrived to lose an FA Cup 4th round replay 4-2 against Sheffield United. Much like the position we found ourselves in last Thursday, as events unfolded.

Back in â52, three days later, we played and beat Coventry 2-1 at the Boleyn in front of a 19,486 crowd. No hint of suspending matches then.

And finally, something personal. The last state funeral was back in 1965 when Winston Churchill died. I was a teenager and my parents were determined to attend the lying in state in Westminster. 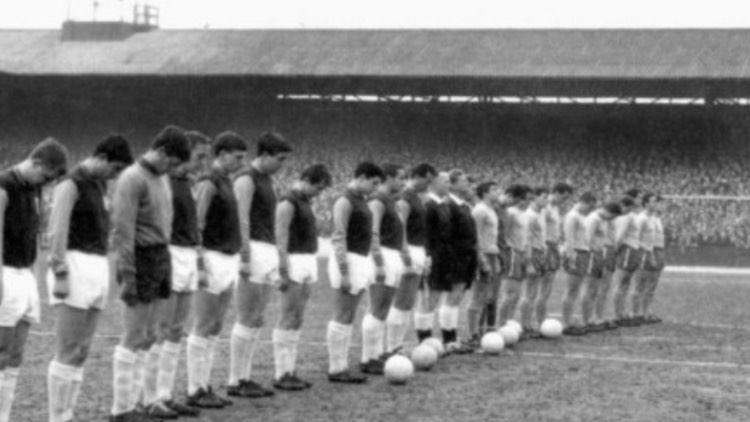 To their generation he was royalty, the man who had guided them through the war years, so they wanted to say their thanks. Dad got back from working in town on the Friday before the funeral and drove me and mum back into London from Hayes.

The back of the queue was on the South Bank and snaked back towards and over, I believe, Lambeth Bridge and back down towards Westminster Abbey. It was bitterly cold and took easily three hours before we were able to pass the coffin.

Itâs an image that has never left me. Heaven knows what time we got home, but we were up with the lark and back across London the following morning. We were the holders, and facing Chelsea in FA Cup fourth round, having beaten Birmingham 4-2 in the previous round.

Of course we lost to Chelsea 1-0, Bobby Tambling scored early on in front of 37,000 fans. It was another bitterly cold day. But the memory was of the pre-match line up and the minutesâ silence. They had them then and nobody moved a muscle.

The picture that day of our team was total respect. First in line was John Sissons, little more than 18, with his head bowed. He was about my age , from the same school. A child of the '60s, the war just 20 years before. These are memories that never leave you, just as todayâs youngsters will remember this week, these few days.