Welcome to the seventh annual KUMB awards, for the 2003/04 season. We asked you to vote in ten categories this time around; here's how you saw it. 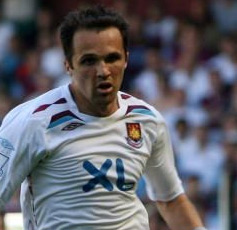 Not quite the whitewash all previous polls had predicted but Matthew Etherington was still a clear winner in this year's Player of the Season category, taking almost half of the vote. The winger, bought by Glenn Roeder last summer from neighbours Tottenham had a fantastic season; Hammers fans will be hoping that unlike the last three annual winners in this category he remains at the club next term. The industrious David 'Angry Ant' Connolly pushed Etherington all the way, taking just under a third of the vote - whilst Michael Carrick, who, incidentally, has never won this category, makes up the top three.

Already a regular on the international youth scene, Chris Cohen make his first team breakthrough this season at just 17 years of age, and didn't look out of place for a minute. Taking almost half of your votes, Chris is the clear winner of this year's Young Player of the Season. Not a million miles behind him was Anton Ferdinand, who is finally making waves in the first team. Ex-Wimbledon midfielder Nigel Reo-Coker impressed enough to take one in five of your votes to make it into third spot.

For only the second time since our awards began, the person you voted Player of the Season is also your Best Signing. No surprises really, as Etherington has been superb value for money - as has runner-up David Connolly, who has to settle for second place again. The fact that both of these players were signed by the much-maligned Glenn Roeder shouldn't escape note. Versatile and dependent would best sum up third placed Hayden Mullins, who has barely put a foot wrong wherever he's played since moving from Crystal Palace mid-season.

When he flapped at a corner to gift Sheffield United a 90th minute equaliser the week after David James had departed memories of Steve's painful debut some years earlier against Bradford were revived, and many were asking if the lad from Rochdale would ever make it at the club. But Bywater has confounded his critics and deservedly tops the Most Improved Category this season. He denies Matt Etherington a hat-trick of awards (by some considerable margin), whilst the surefooted Hayden Mullins grabs another deserved mention in this season's gongs. Interestingly, our 2001 winner in this category - Christian Dailly - polled 8% this time around, leaving him just a point behind Mullins.

There is always one game in a season that stands out head and tail above everything else, as the list of previous winners in this category does attest. This season it was undoubtedly the play-off semi-final second leg against Ipswich, where Upton Park was briefly restored to its former glory for a couple of hours on a balmy May evening in which the Hammers secured passage to Cardiff (and the less said about that, the better). The dramatic Defoe-inspired comeback against Sunderland earns enough votes to secure second place, whilst the FA Cup win at Wolves which heralded 'La Revolucion' comes in third.

Less than half an hour into his Hammers career Jon Harley unleashed a thunderbolt to stun not just Sheffield United, but every watching Hammers fan who thought they were on to a right winner. Six months later Harley was on his way back to Fulham. Mattie's wonder goal against Ipswich in the play-off semi-final may have won more votes had the polls opened later, but still did enough to earn second spot. Marlon Harewood gets his only mention in this year's awards for the belter at Carrow Road.

Brought in by Trevor Brooking as cover for the injured Rufus Brevett, Newcastle-reject Wayne Quinn had a shocker of a season at left-back - so much so that he was eventually bombed out by the right-footed Anton Ferdinand and Hayden Mullins. Tomas Repka earns second spot despite enjoying a good first half of the campaign, whilst Richard Garcia - who spent most of the season on the sidelines through injury - still had enough nodding their heads in disapproval to earn third spot. Our winner from 97 and 98 certainly had his revenge on his critics ...

Three different players signed by three different managers in the same season - that's a first for a KUMB award! Trevor Brooking's Wayne Quinn, like Gary Breen before him romped home in his second 'worst' award with a resounding 55% of the vote. Glenn Roeder stop-gap signing Rob Lee - signed some 10 years too late - was bombed out long ago, whilst Alan Pardew's Bobby Zamora has a lot to do to convince Hammers fans that he is up to the job in hand.

The closest of this season's categories, your biggest disappointment of the season came back in March at the New Den against our oldest of rivals, Millwall - where Pardew's side were humiliated against an inspired Lions outfit whose commitment to the cause would probably have been described by Alex Ferguson as 'obscene'. Paul Aldridge's infamous 'fire sale' quote - which preceded the disappearance of two-thirds of last years squad - angered many of you who felt duped into renewing your season tickets, whilst Jermain 'he's not right in the head (©Terry Brown)' Defoe's departure was questionable; even more so when Bobby Zamora missed that sitter at Cardiff. The event that would have won this category by a mile - the play-off final defeat at Cardiff - occurred after the polls had opened, yet still managed to gather 7.5% of the total vote.

A special one-off category included to recognise the mass exodus of quality players this season, the player you missed most of all was the Italian talisman Paolo Di Canio. After four years of amazing the crowd at the Boleyn PDC jumped ship (or rather walked the plank) in order to join London neighbours Charlton. Last year's KUMB Player of the Season Joe Cole was next on the list, whilst last years Most Improved Player and runner-up Player of the Year Glen Johnson came in third.

So that's that for another season; let's hope 2004/05 finally brings us something to smile about. Finally, a big 'thank you' to everyone who voted in this years awards.