Welcome to the eighth annual KUMB awards, for the 2004/05 season. We asked you to vote in nine categories this time around; here's how you saw it. 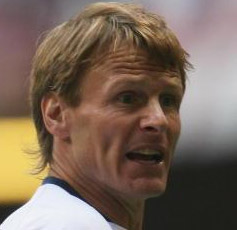 Many eyebrows were raised when Alan Pardew brought the then 38-year-old Sheringham in on a free transfer from Portsmouth. But the decision proved to be a masterstroke as Teddy managed to hit over 20 goals in a mostly injury-free season (the irony perhaps being that he wasn't involved in any of the key play-offs matches because of injury). With several team mates vying for second spot Anton Ferdinand managed to turn around poor early season form to finish a deserved runner-up, whilst the oft criticised Tomas Repka - who finished last season as your third most improved player - narrowly edged out Marlon Harewood to register in the main category for the first time since joining the club. 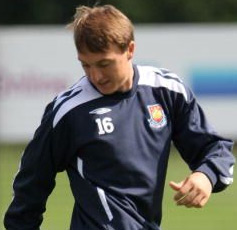 He's still only 18, quite possibly better than Roy Keane and your young player of the season. Mark Noble broke into the first team earlier on in the season and became a vital cog in the midfield during the final dozen or so games. This is his first KUMB gong, but almost certainly not his last (at least, we hope not). Anton repeats his second place spot from last season whilst Elliott Ward - who came out of nowhere to become a first team regular in the final third of the season - also features for the first time.

As with Matty Etherington last year the winner of this award also won the Best Player award; Teddy Sheringham waltzes home with two of every three votes cast in this category. Teddy's experience has been invaluable to the team this season, and his goals made sure we stayed in with a chance of making the play-offs. Jimmy Walker was some way behind but still managed to pull enough votes to come in as runner-up, whilst the evergreen Chris Powell comes in third.

Despite a poor start to the season Anton overcame his demons and earns his just reward by being nominated as your most improved player of the season. Booed at times by elements of the home crowd at the tail end of last year Anton has silenced his detractors and now looks set to feature regularly in the Premiership next season. Elliott Ward couldn't even get a game on loan six months ago but has been solid as Ferdinand's partner in the centre of defence, whilst Bobby Zamora - another who had to work hard in order to silence the boo boys - gets a deserved mention in third spot.

A year to the day after the memorable 2-0 semi-final second-leg win against Ipswich at Upton Park the Hammers went to Portman Road knowing they had to win to secure a place in the play-off final after a 2-2 draw in the first leg. Bobby Zamora's brace saw to that, and you voted the 2-0 win as your most memorable match of the season. The historic 1-0 play-off final win against Preston would almost certainly have drawn more votes had the polls opened a week later, whilst the 1-0 defeat at Chelsea in the Carling Cup (and Frank Lampard's penalty miss) grabs third spot.

Bobby Zamora's delightful lob in the play-off semi-final second-leg took nearly four in every five votes in this category, and is the most comprehensive winner in any category this year. Marlon Harewood's contribution to Zamora's stunning strike should not be overlooked for it was his 80-yard-run that made the goal. Marlon himself gets a shout in second place for his 25-yard thunderbolt against Sheffield United, whilst Zamora's play-off final winner against Preston - whilst not exactly technically perfect in execution - was memorable nonetheless.

Poor old Don has had all sorts of problems since rejoining West Ham four years ago, but you decided that enough was enough for the Scottish international who has cost the club some £5m in wages since signing from Sunderland. Dogged by controversy this season (including one aborted loan spell at Nottingham Forest) Hutchison's longest appearance for the Hammers came on the bus at the play-off victory parade - which says it all. Former Norwich captain Mackay was unlucky to suffer an injury midway through the season from which he never recovered, whilst Steve Lomas and '£11m [Sergei] Rebrov' tied for third spot.

Mauricio Tarrico signed from Spurs on the Friday, played 27 minutes against Millwall the following day and cancelled his contract 24 hours later after sustaining an injury - which was enough for you to vote him your worst signing of the season. Malky Mackay started well enough but looked a far weaker option after coming back from injury whilst the wee Ukrainian left most of us scratching our heads wondering what had happened to the outstanding talent which once partnered Milan's Schevchenko.

Throughout the season both the manager and his players have been subjected to booing from some elements of the home (and away) support, and it was this that most got your goat this season. One hopes the team will receive rather more support next term. One in five of you felt that going up via the play-offs wasn't good enough for a club of West Ham's stature, whilst for 16% of you it's a case of 'we're up, but we want Brown Out'.

So that's that for yet another season; for a change we finally have something to look forward to what with our impending return to the Premiership - here's hoping there are more heroes than villains to mention in the 2005/06 awards.

Finally, a big 'thank you' to everyone who voted in this years KUMB awards - and for your continued support of the site.