First trip to the OS for me. Coming up to the smoke on Friday by train and staying in Stratford over night,

I'll never live this down at work if we lose this one.

So w finally get to see Chico and Sakho up top the dilemma for Slav is how we get Obiang in the team , only a 3 5 2 achieves that
Top

another must win game for slav,

surely sakho and chico together

onto spuds then
Top

Friday nights are becoming my favourite time slot, looking forward to this
Top


I wouldn't change too much in terms of the formation we played against Burnely. Especially as this game is against another team near the bottom we should be looking to beat. This is the formation I would like to see us go with in future against the bottom teams and then go with the 3 at the back against the top teams. Sakho to come in for Carroll, so Chicharito has support. I would add an extra defensive body in midfield (Obiang) as it'll go more of our players a license to get forward. I know I put Lanzini on the left, which will be controversial. But it's more of a free role. I would allow him to go more centrally depending on how the game goes. And with Obiang and Kouyate in the middle. That should relieve the pressure from him. I haven't dropped Cresswell for allowing that cross for Burnley's goal. As we have been defending well recently anyway. And I don't like tweaking defences too much when it is working. But I wanted to add Masukau to the team to add more balance attacking wise to the team. With Antonio on the right we have no real pace on left. So I would go with Masukau. You could go with Cresswell at left back, with Arnie in front of him and perhaps drop one of Obiang, or Kouyate to the bench and move Lanzini in the middle. But I just think we need one extra 'battler' in midfield. As I expect there to play pretty physically.

looks good to me. masuaka deserves a chance thats for sure.
hopefully slav will go two up front for this one.
if not then cresswell in at LB with athur as LW
hernandez must start
lanzini must start
antonio must start
obiang must start
kouyate must start

A must win match .

Neither Sakho nor Hernandez would be considered for selection due to their behaviour .Carroll is suspended and Collins unfit .
Top

Watching this in a Brighton pub with a Brighton mate, should be fun. I expect another draw.
Top

cockney farmer wrote:So w finally get to see Chico and Sakho up top the dilemma for Slav is how we get Obiang in the team , only a 3 5 2 achieves that

I'm not so sure he'll start Sakho, in fact I don't think he will.
Top

I reckon we will see this - but maybe Collins on the bench for either Ogbonna or Fernandes. 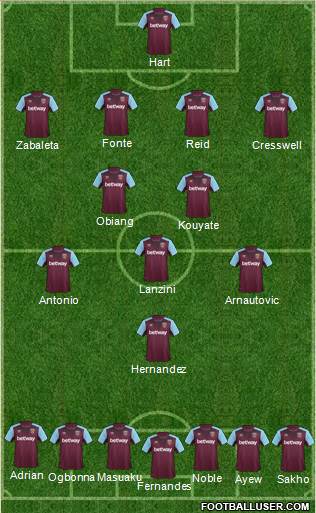 bubbles1966 wrote:I reckon we will see this - but maybe Collins on the bench for either Ogbonna or Fernandes.

Think that will be the team although can't understand Noble not being picked over Kouyate or Obiang as he has played better than both THIS season.

Finally get to the the fluid attack of Antonio, Arnautovic and Hernandez with Lanzini making it all happen from behind!

the pink palermo wrote: Hernandez would be considered for selection due to their behaviour .Carroll is .

He let off 2 minutes of steam because he was disappointed at being subbed, and you would drop him for poor behaviour? Laughable.

You label it a must win game, then put Ayew and Antonio upfront and drop both our strikers.

You must be trying to whip up a bit of debate, because surely you can't be serious with this?
Top

il_martello_di_genovesi wrote: He let off 2 minutes of steam because he was disappointed at being subbed, and you would drop him for poor behaviour? Laughable.

You label it a must win game, then put Ayew and Antonio upfront and drop both our strikers.


Last week against Swansea he sat in the dugout with a face like a slapped arse after being subbed .

This week, due to no action being taken of which we are aware , he clearly declined to accept the Managers consoling words as to either his performance or why the change was made and strops off to the dugout .

It's a very fine line between disappointment and petulance and my opinion is Hernandez has crossed over to the wrong side .

Petulant behaviour if left unchecked results in players refusing to play for the Manager , ****ing injury and the Manager losing the dressing room and ultimately his job .

The club Captain was left out completely yesterday , he still travelled with the squad, sat on the bench for the entirety of the game , a game in which he would undoubtedly feel he would have been a good option to come on and lock up the midfield a touch .The Manager took a different approach , but the captain didn't misbehave .He took it on the chin like the good professional he is .

We have a club where the Chairman signs the players, interferes with team selection, won't discuss the Managers contract until it will have run out , and that poor standard of behaviour eventually transfers to the players , who start taking the piss because they can see the Manager lacks the backing of his boss .

The end result is a slide down the table , it all becomes a self fulfilling prophecy whenever a Manager is undermined .
Top

One thing is for sure and thats Slav is definitely not the man to lead this club in the long term. Yes the owners have a part to play in this, but even with 11 men yesterday we scored from our keeper hitting it long and being a bit fortunate for it to land at Antonio's feet. We seem to lack belief going forward and its even worse when Lanzini is absent as he's the only one who links the defence and the attack. There's not been one game this season (maybe bar the last 20 minutes against Tottenham) where i've looked at us and thought 'wow, we played them off the park.' No one wants to see that for seasons to come. Love Slav but personalities don't win you football matches I'm afraid.

I think we will beat Brighton next week, but I feel it only pro-longs the inevitable of Slav leaving in the future.
Top

Pinkie having his weekly Hernandez dig I see.....

Bothers me more when players can't wait to get off the pitch and sit joking with others on the bench.
Top

smuts wrote:Pinkie having his weekly Hernandez dig I see.....

Not at all Smuts , but feel free to debate the point I'm making rather than having a pop at me .

Have a read of the comment I made pre match .I expected Hernandez to get a pair yesterday and for me to have to cough up to the BMF .

Ayew - a £20m player - couldn't get a game yesterday .Would you be ok about it if he couldn't be arsed to train on Monday ?
Top