sendô wrote: That line up and high line will probably work well against half of the league.

So true... and something that Pellegrini has to learn very quickly (hopefully just has).

We are not Man City, we cannot play that expansive in every game. We will be fine playing that way against 10-13 teams, especially at home. But we need to be a lot more compact and solid against the top six, especially away.

Steep learning curve and a very tough first fixture so not really worth getting top excited either way. I have a feeling Liverpool will do that to many a side this season.
Top

The two Liverpool players in front of goal are miles offside when Milner puts the ball back across?? 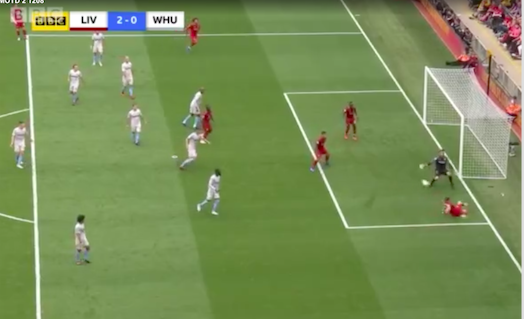 The thing I noticed from the first whistle is that despite being the first 11 that I expected to play, the midfield weren't set up how I thought. No one was really holding, hence Rice and Noble being caught too far up the pitch for the opening goal. We were almost too gung ho, like Pellegrini thought we were better than what we are.

I would've expected at least one midfield anchor, being Rice... but these comments on the OS confirmed...

" Before the game, manager Pellegrini had stated his desire to play his own game at Anfield, despite Liverpool’s own considerable attacking threat".

I don't think we're quite good enough for that yet.

Regardless of the heavy defeat, TRUST THE PROCESS

and roll on Bournemouth at home on Saturday.
Top

Once Pellegrini's ideas and tactics start to become more natural to the players the better.

I wonder if the defenders were concentrating so hard on playing that high line yesterday and stepping up, that some of them missed out on doing the basics, add to that trying to cope with Mane and Salah, when to go forward (in the fullbacks case) and when not to.

Maybe the midfield were so focused on their pre-match positional instructions, that they neglected parts of their game, like closing down, playing simple passes etc.

It will take time, but as soon as Pellegrini's way of thinking becomes natural to his players, the more they can focus on other elements of their game, that were lacking yesterday.
Top

Milner is in front of those 2 players so it's fine.
Top

I don't think you can be offside if you are behind the ball. They could have been offside for the previous deep cross though.
Top

Basics harry. They are not offside if they are behind the ball.

Back to offsides 101 class.
Top

jacko wrote:Basics harry. They are not offside if they are behind the ball.

Back to offsides 101 class.

aitchayell wrote:I know that there are some knowledgeable posters out there so could someone please explain to me why-
1.We have spent over 20 million on a promising 22 year old central defender when we already have a promising 19 year old central defender.
2.Why we have spent around 60 million on 2 wide players (maybe 3 with Perez) but do not have a midfield capable of winning, keeping and using possession.
3.Why we have 3 right backs, but only one proper left back.

Thanks for your help.

1. We needed more centre halves, Reid is injured, Collins let go. It's a squad game these days, you can't just moan because a player we've paid a lot for is on the bench for one game.

2. We needed more fast, attacking players. Yes, we need ball winning midfielders too, but bugger me if you want it all what are you doing supporting West Ham?

3. We have 2 RBs, Byram is out on loan and tbh not PL standard. As to LB, I'm not sure I even consider Masuaku a footballer. When he does manage to pull off a bit of skill it seems like he surprises himself as much as the rest of us.
Top

It's not really a high line - it's using the penalty area as a line to hold..... which seems like suicide. It's neither a press nor a high line nor defending the area. You might catch them out a couple of times but against a team like that it's suicide. It took them about 10 minutes to work it out. And other teams will be looking at that so if we do it again they'll be doing exactly the same. You just need to get a wide player deeper than the line to pull it back.
Top

They're not offside because they're behind the ball. To be offside you have to be nearer the goal than the 2nd defender AND the ball.
Top

Slightly disappointed that Noble had to give a pointless free kick away on the edge of our box by having a little tug on the opponents shorts (or shirt?) when he had already cleanly won the tackle. He does have weakness for silly fouls.
Top

In that picture they are not offside but they were clearly offside before the pass to Milner.
Top

It's not often that you see eight defenders in the penalty area, and three attackers in ten yards of space directly in front of goal. Takes some doing, that. COYI.
Top

What I don't like about the whole "first and second phase" bullsh*t is that the defence believe that they have done their job by holding their line and catching the two in the middle offside. Back in the day the two in the middle would have been flagged offside as soon as the ball was played into the box towards Milner. The reason why they're not offside is that they weren't "interfering with play" - if you ask me, 1) standing in the middle of the box is pretty interfering to me, and 2) they are standing behind the defensive line so are interfering with what's on the defender's minds and how they're set up.

Let's be honest, Mane and Firminho are offside there. When the ball is put the ball in, they are stood offside in the 6 yard box. The fact that it goes to Milner who is ahead of them when he puts the ball across is immaterial - they've already gained an advantage by being offside. How can they not, they're in the 6 yard box.

The interpretation of this rule from referees continues to infuriate.
Top

HammerAl wrote:. ......The reason why they're not offside is that they weren't "interfering with play" - if you ask me, 1) standing in the middle of the box is pretty interfering to me......

Agree entirely, it is "gaining an advantage"... FWIW, Wiki says the quote was attributed to both Bill Nicholson and Danny Blanchflower.
Top

Antonio is just getting on my nerves now, he's greedy, not a team player, unfit too