Taxi for Karren ? Is one due ?

Don't think you will hear much of it on the box, Sky will see to that.
Top

"David Sullivan and David Gold have given eight years of blood, sweat and tears to help West Ham escape a very perilous situation upon our arrival, make the club financially sustainable and realise an ambitious stadium move, all of which have come with great challenges and sacrifice."

This is exactly the kind of crap that is causing the ill feeling. She is either completely incompetent and delusional or they are insulting the intelligence of the support on purpose. Whichever way round it is the breakdown is only going to get worse.
Top

There more to that article..

About how all she’s heard this week is they don’t care and how much they do.
Some BS about Sully emailing people at 3am
As above how they have overseen an ‘ambitious stadium move’
Top

She says she cares deeply about the club - well so do I Karren and have done for over 50 years.

If you care so deeply why do you let Alan Sugar get away with having a dig at West Ham on the Apprentice - he's done it twice now and you haven't said a word.

Trust me Karren, if I was on the show he would not get away with it.

Her statement over Mike Ashley doing the right thing in selling up because he could not make sufficent investment to move Newcastle forward - He spent £140m buying the club against the Davids £100m - He waives the interest , the Daves charge 7% and he has consistently outspent us in the transfer market! What a sad deluded twonk.
Top

I8CHAVS wrote:Whilst i am not her biggest fan and am actively seeking for her to leave, especially with the Conservative connections, some of the crass comments about her in here and about women in general is part of the wider problem and playing into her hands, totally unacceptable in 2017

We slaughter the board, rightly, for not having no class, so lets at least have some of our own.

I get where you're coming from, but she really is nasty nasty individual.
Top

"At West Ham, none of us ever begin a season preparing ourselves for a tough one"

Well maybe you should! Have some contingency plans, because the law of averages says not every season is going to be a belter.
Top

LOL exactly Del. A relegation battle about every 4-5 years is the West Ham way

Got her priorities in order, then.
Top

A truly crass woman who trades entirely on the false image perpetuated by idiots and lapdogs in the media.
As I've said before, she doesn't need a taxi, she needs a taxidermist..
Top

"I’ll be in Dubai with the family after Christmas to escape the British winter."


As long as you promise not to come back, we'll all chip in for your cab fare to the airport. Taxi!
Top

Colours never run wrote:"I’ll be in Dubai with the family after Christmas to escape the British winter."


As long as you promise not to come back, we'll all chip in for your cab fare to the airport. Taxi!

She won't be in the 'world class stadium' or at Bournemouth. I hope the cheeseboard in Dubai lives up to her expectations.

This is what she had to say a year ago in the accounts - in any other business with what's happened in the 12 months since, she'd be gone! 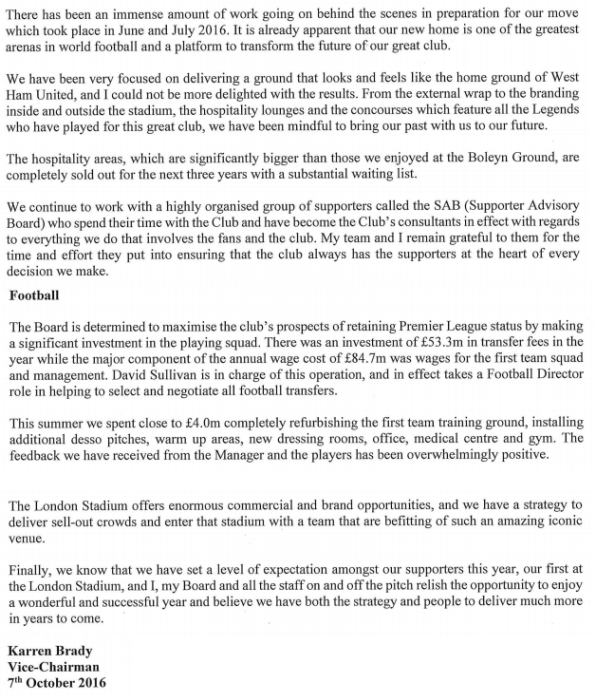 'I DON’T KNOW WHETHER I’M COMING OR GOING'
Trust me, most of us on here are praying it's the latter one.
'THE THOUGHT OF A SKI HOLIDAY FILLS ME WITH TERROR'
So her and the other 2 goons will probably still be here even if hell freezes over.
'MY HEART LIES IN LONDON'
Someone get the stake ready.
'I WAS LEFT IN TEARS'
Arsenal missed out on The Champions League this season.
'I FELT LIKE A PLEB'
And that experience helped me to develop the style I currently use when addressing my West Ham United 'customers'.
'ENJOY THE JOURNEY'
On a rudderless cruise to The EFL Championship.
Top

As taken from https://www.london.gov.uk/sites/default ... review.pdf" onclick="window.open(this.href);return false; pages 9 and 10:


When the transformation works started, not all of the design work had been completed and it quickly became
clear that the transformation costs were going to be in excess of the budget previously set, as a result of three
factors:

1. A decision was made to host games during the 2015 Rugby World Cup, which meant that the
transformation works would need to be carried out in two parts, causing increased costs.
2. Furthermore, as the design work was completed and the existing roof was removed, it was identified
that significantly more structural work would be required to support the new roof, which would
become the largest cantilever roof in the world.
3. In the lead up to the Rugby World Cup, the seating contractor in charge of designing and installing the
bespoke retractable seating solution anticipated to address the need for the seating to come forward
for football use and back for athletics use, first experienced severe technical difficulties, and then went into administration. To meet the RWC timetable, a temporary manual fix had to be installed. This
changed the seating solution from a retractable solution to relocatable.

Wait, what?! The seating is not retractable? I am shocked....
Top


The West Ham vice-chair has often in the past (see below) talked negatively about Ashley at Newcastle but thought that after promotion his ‘big cheque book’ was going to be unleashed.

Instead, Rafa Benitez was only allowed a net spend of £11.5m in the summer, whilst Huddersfield and Brighton’s were both £40m+.

With Mike Ashley putting the club up for sale, Karren Brady now believes Newcastle United ‘are a tiger waiting to be unleashed’.

With 52,000 crowds and Rafa Benitez in charge, she has joined the queue of people who believe NUFC are heading for much better times…if the right new owner appears.

“Rafa Benitez went to St James Park understanding far more clearly than his employer that the Toon are a tiger waiting to be unleashed.

“Mike Ashley the gambler was initially tempted by the huge potential of the club.

“But Ashley the businessman admits he has not been able to work out how to operate the intricate internal machinery that makes one up.

“Rafa’s management skills are responsible for Ashley’s windfall and he now has a fair chance of transforming Newcastle into one of the few clubs with the support and profile to challenge the very best.

“A guaranteed 52,000 home crowd will be a warming prospect to potential buyers with sound ideas and an even sounder wallet….only billionaires need apply.”
“Championship champions Newcastle are lucky to have Rafa Benitez as manager and the 57-year-old is lucky to have Newcastle with their huge and deeply loyal following.

“I sense Benitez is happy at a club with a similar working-class character to Liverpool where he is still regarded with much affection, not least for winning the Champions League.

“In Sports Direct owner Mike Ashley, he has the vast financial means to give the Premier League a real go next year.

“Mike talked about ‘making your own luck’ but in football you also need a good manager and great players.

“He has at least one of these ingredients. And in my experience the rest follows – as long as you have a big cheque book, which Mike certainly has.”
“David Gold says that there’s no chance of he and co-owner David Sullivan selling West Ham.

“How different from Mike Ashley, who appears to be going through the motions like a marriage with Newcastle, that both bores and irritates him.

“Owning a club is a business but, more than that, it is a responsibility to the community, fans and the game itself.

“Only Mike Ashley knows how many of those tests he thinks he passes.”
“Rarely is it thought necessary for a club captain, in this case centre-back Fabricio Coloccini, to issue a letter apologising for the way the team have been playing, pleading with fans to unite behind them for the last three matches.

“I think someone at the top must have had a brainwave and whistled up the club captain to do it, and probably wrote it for him.”
“Alan Shearer’s 15-year-old son often chooses rugby over Newcastle United.

“The waste of a free ticket may upset the owner more than his club’s failings but, according to Shearer, son Will is not alone.

“Newcastle are going through an abysmal time, despite boss Steve McClaren saying ‘we are doing the right things every day’, bar matchday, I guess.

“Owner Mike Ashley has to try to rectify things in the January transfer window, or accept one of our great clubs is on the road to relegation.”

She,obviously, cares more about Newcastle United than she does for West Ham United.
Mike Ashley paid £140m(Gollivan = £100) for Newcastle and does not charge them interest (Gollivan = 7%).In ten years he has spent £309m on transfers( Gollivan =£265) This summer windows his net spend is £23m (Gollivan=£17m )
If they are a" tiger waiting to be unleashed" what the f*** are we?? a friesian cow to be milked till dry and then flogged for pet food.
Top

sanchoz wrote:
Wait, what?! The seating is not retractable? I am shocked....

Has she completely lost her marbles? Why the f*** is she banging on about Newcastle?
Top

"David Sullivan and David Gold have given eight years of blood, sweat and tears to help West Ham escape a very perilous situation upon our arrival, make the club financially sustainable and realise an ambitious stadium move, all of which have come with great challenges and sacrifice."