What makes you say that? If anything VAR has been a pain...
Top

If we are to put up with it it needs to be streamlined, and in particular it needs to be absolutely limited to "clear and obvious" errors by the on-field officials.

1. Offside: No more dodgy foot-thick lines. In fact no lines at all: if it isn't clearly offside by the naked eye on unmarked screen from two angles within 15 seconds then the on-field decision stands.

2. Serious foul play: ref to be alerted if he missed it, play stopped when ball in a non-contentions position and ref to review incident on-screen. Either award the foul (and use the appropriate card if necessary) or restart with an uncontested drop if ball not dead.

3. Possible penalty: same as foul play - ref to stop play when appropriate, review on-screen and decide himself whether he was right or wrong.

Running over to the pitch-side monitor and reviewing will usually take far less time than is being used at present.
Top

Don't laugh - in Australia we have the "McDonalds VAR"! Instead of drawing the TV screen with his fingers the referee's boss once did it with the McDonald's "M" for a laugh... 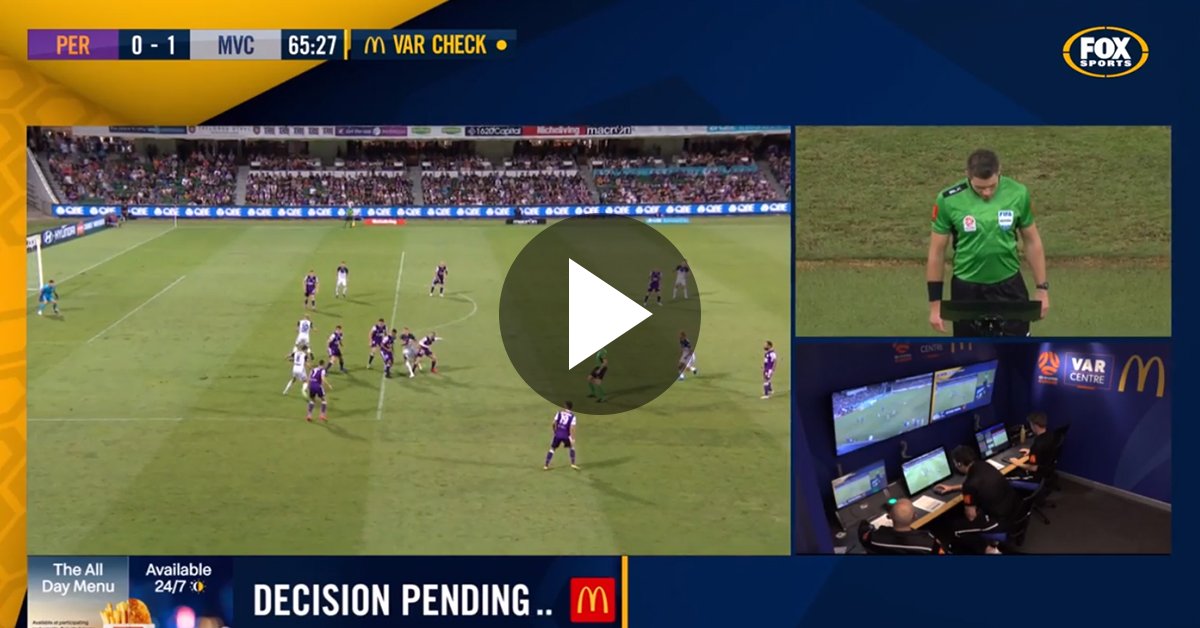 You wouldn't give it handball anywhere else on the pitch, so why for a goal?

Meanwhile we've had more games this weekend where they've freeze framed as the ball leaves the players foot, and drew a line showing an attacker's armpit as offside.

The whole thing is a joke.
Top

I think the principle of what VAR should be is right, they are just doing a fantastic job of ****ing it all up. Plus new rule on hand ball as in the Declan incident. Remember Man C having a goal disallowed late in the game against Tottenham which was another joke decision. They need to sort that rule out, that is not VAR's fault.

As for offsides, maybe change to just feet, not head/armpit/shoulder/cock etc. Just feet would help it. Also decision process, I don't know how long the average decision is taking, I would guess a couple of minutes, most I have seen can be done in 30 seconds.

I think VAR is still the way forward, they just need to make it smarter and easier with changing the rules.
Top

You wouldn't give it handball anywhere else on the pitch, so why for a goal?

The principle behind it is that if a goal is scored because a handball has taken place then that is a big penalty for the opposing team. In order to do away with interpretation over such an impactful decision the law was changed so, in theory, there is no ambiguity. It is either handball or not

What they had in mind [imho] was those occasions when an attacking player may accidentally handle it in the penalty when controlling the ball, or it hits a strikers arm accidentally and goes in. In theory, under the old law that shouldn't be penalised [even though the attacking teams gets a massive advantage] but obviously hard to tell what is deliberate or not, and so there was never consistency in the decisions given

The trouble with the new law is that it extends to situations that happen a long way from the goal during the attacking phase of play, and there still seems to be loads of ambiguity and interpretation about what a phase of play is! Also, if Rice had passed it to someone else who then passed it to Snodgrass, would that have been disallowed?

AS someone else said, the law could be changed so that 'accidental' handball is only penalised if it takes place in the attacking penalty box, and VAR can only act on hand ball incidents in the penalty box. this would rule out the Antonio one at Chelsea, but that was the right thing to do IMHO. You shouldn't be able to score with your hand, accidental or not! Antonio v SAints or Rice v Sheff U would not be ruled out [unless the on-field ref thought it was deliberate and call it on the field of play ]
Top

Crouchend_Hammer wrote: ↑
Mon Jan 13, 2020 10:51 am
Also, if Rice had passed it to someone else who then passed it to Snodgrass, would that have been disallowed?

I’ve not seen the replays but I’m assuming what looked like a soft handball by dele alli that proceeded the Firmino goal was not ?
Top

Albie Beck wrote: ↑
Sun Jan 12, 2020 10:06 pm
Running over to the pitch-side monitor and reviewing will usually take far less time than is being used at present.

In this age of smart watches does the ref even need to move to review the incident?
Surely it's not a leap of technology to invent a folding or rolling screen if necessary if a lightweight phablet strapped to his forearm isn't large enough.
Top

I actually think i like the idea of offside being changed to feet only.

VAR can be beneficial however its just farcial at the moment and still has different outcomes for different teams ala Aubamayang Arsenal and Robertson Liverpool which both seemed to hit the same area yet one was VAR red the other was no VAR at all. (Admittedly i have only seen a still of the Robertson tackle).

Declans goal should have stood - that was everything that was wrong with VAR.

Aubamayang getting a red was VAR proving to be useful.
Top

I don't normally watch SSN or whatever but this morning popped over to No1 sons and ref watch or VAR watch or whatever they call it was just starting.
Declans 'handball' was the subject of much debate. Apparently, the law is 'black and white' if the ball touches the arm, etc etc etc. by which time my lad was saying, 'show the Van Dyke one then' let's see why that isn't black and white. No mention of that of course.

The Robertson 'booking' was next up, that it seems, was not the same as Aubameyang's tackle but as if that wasn't bad enough, that dreadful and belittling habit of talking laughing that these c**** have perfected had made its unsurprising appearance.

It's clearly still not what you do, but who you do it to. VAR just makes it more obvious.

Whereas I accept that live at the game in the moment etc. a goal is scored and celebrated, watching live on TV I'm finding it difficult to celebrate the 'goal' because, that's rarely the end of it.
.
Top

For those saying just use feet for offsides, what if the striker is a small pacey little player and the defender is a big cumbersome 6'5", ones got size 5 feet and the other has size 13, do you still give the offside by a millimeter like they do now?
Top

Tristan Shout wrote: ↑
Mon Jan 13, 2020 12:59 pm
For those saying just use feet for offsides, what if the striker is a small pacey little player and the defender is a big cumbersome 6'5", ones got size 5 feet and the other has size 13, do you still give the offside by a millimeter like they do now?

If that was the case and both players were standing upright, wouldn't the majority of the striker's body be closer to the goal?
If it was the striker with the ginormous feet though....

I think using the feet is a reasonable suggestion, (that's the only relevant body part on encroachment isn't it? So why be different for offside?) although I'd probably even prefer if it was a whole foot. Or a whole relevant body part, ie head or foot.
I don't understand how it's right that a player can be 99% closer to his own goal yet be deemed offside at the same time.
Also, these rules, as someone mentioned earlier, all reduce the number of goals and surely that's not what anyone wants, is it?
Top

What if we only use feet and someone scores with a diving header?
Top

Offside is from when the ball is kicked so presumably the player isn’t already diving when the cross is kicked or that would be some impressive hang time.

If he just happens to be leaning forward with his feet onside and then dives and scores then good for him.
Top

Offside has to be daylight, its the only sensible option, there should be a clear gap between the defender and the attacker, if they are level and only a nose hair difference, then how much advantage are they really getting??
Also do away with the not interfering with play nonsense, if your on the pitch then you're interfering with play
Top

Just do away with the lines. If from a still the VAR panel cannot come to a unanimous agreement in 30 seconds stay with the onfield decision.
Top

thejackhammer wrote: ↑
Tue Jan 14, 2020 8:17 am
Just do away with the lines. If from a still the VAR panel cannot come to a unanimous agreement in 30 seconds stay with the onfield decision.

Just do away with the whole ****ing thing, has not made the game any fairer and has just taken away another chunk of the enjoyment in going to games, as if our lovely Board haven't already done enough to destroy the matchday experience.
Top
Post Reply
1584 posts