MARCUS Browne showed he could be an option for Oxford United as a striker as they came from behind to beat Blackpool.

The sale of Shandon Baptiste and Tariqe Fosu on deadline day accounted for half of the four changes to United’s starting line-up.

Jamie Mackie and Elliott Moore also made way, but there were returns for James Henry and Cameron Brannagan, while John Mousinho and Nathan Holland also started.

The hosts had a penalty appeal on Long turned down, before the final action of the half saw Holland have a shot well parried by Chris Maxwell.

Just before the hour he came out on top against two defenders, but from his pass Holland fired wide left-footed from 12 yards.

Wasted a great chance, but overall it was his best display as a starter 7.5

Charlton secured a priceless three points with a nervy 2-1 win over relegation rivals Barnsley at The Valley.

The Addick’s confidence grew as the half wore on, but it was nearly their undoing.

From an attacking set-piece, Josh Cullen’s short pass was intercepted only to see the Tykes blaze over after going the full length of the pitch.

PLAYER RATINGS: Charlton 2 Barnsley 1 - an unlikely thorn in the visitors side?

Dynamo in midfield and sets the tempo. His set-pieces caused all sorts of problems throughout and added a swagger to a side that lacked confidence during an injury crisis. Such a big player for The Valley outfit.


Three midfielders crucial to the system

Josh Cullen had a complete performance, resilient in tackles, physical in 50-50’s and precise with his set pieces.

With Jonny Williams looking back to full fitness he aided Cullen defensively but more important he was powerful and purposeful when carrying the ball creating chances.

Darren Partley showed how essential he is in this system shielding the back 3 and shuttling across to cover gaps.

The midfield combination showed a perfect balance of physical defence and swift attacks.

Rangers went the closest they had come a minute before the break when Osayi-Samuel teed up Jordan Hugill, who was off-balance but managed to direct his shot just wide of the top corner from a difficult angle.

The R's let two more good chances go to waste late on as Pugh missed his follow-up effort after Osayi-Samuel's cross was punched into the air by Bentley before Hugill's header from a few yards out was tipped wide by the goalkeeper moments later.


Jordan Hugill 5 - The striker failed to make his chances count and should have put the ball in the back of the net.

A chance for Holland to impress against Newcastle tonight for Oxford - live on BBC 1 8.05pm
Top


Slaven Bilic says Albion are taking extra care with Kieran Gibbs as they guide him back from injury – while Albion’s head coach also revealed he expects to have Grady Diangana back in March.

Diangana is currently sidelined with a back/hamstring injury. But Bilic is excited to have the winger back for the run-in.

“Grady’s further (away) than Kieran,” the head coach added.

“But look Grady should be back, we’re talking about the beginning of March, let’s say.

“Grady should be back for the last seven, eight, nine, 10 games, if we’re lucky, and that’s a lot of games.” 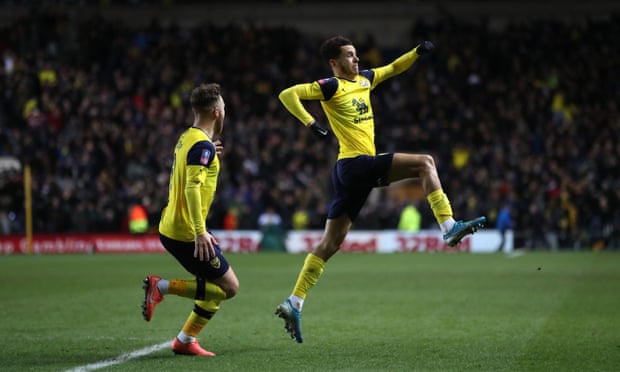 If we get relegated i am sure Holland, Browne and Cullen will play a part for us.
Top

That mutley lookalike Bruces said after, "the lad wont hit a ball like that again". As if it was a wallop from 50 yards out. It was lovely technique with the inside of his foot , no fluke Mutley !!
Top

OXFORD United pulled off one final memorable cup tie for this season, but Newcastle United narrowly edged through after a dramatic night.

The Sky Bet League One underdogs were on top at the start of extra time, but as fatigue set in the top-flight quality proved just enough.

Roared on by a packed home crowd, Holland then wasted a great chance when his scuffed shot from Sykes’s cross hit Mackie and bounced over.

Kelly gave United hope six minutes from the end of normal time with a sublime free-kick which crept in past Darlow’s despairing dive.

It set up a grandstand finish, which saw Eastwood go forward for a free-kick in the final minute of stoppage time.

The set piece was only half-cleared to the lurking Holland, who from 20 yards caressed a high-class volley into the net.

Browne isn't one of ours anymore.
Top

Is there anywhere online I can see this Holland goal? I'm struggling to find it.
Top 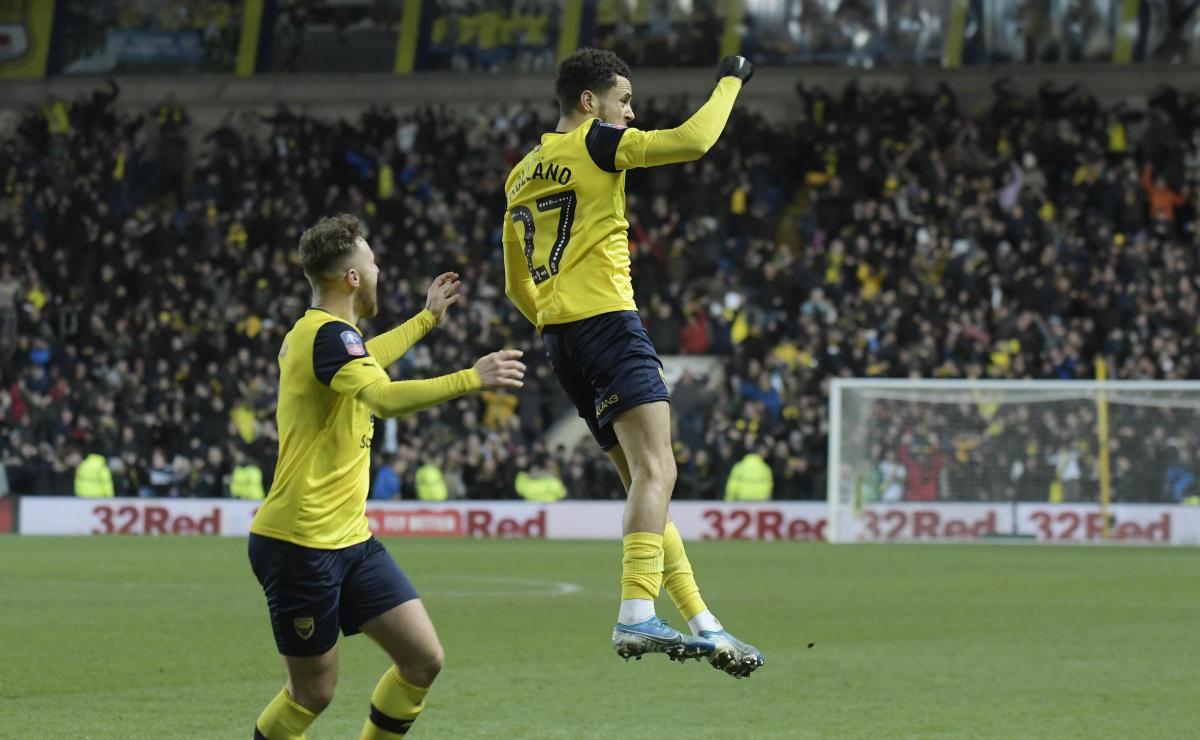 Nathan played the full 120 minutes as Oxford lost 2-3 to Premier League Newcastle in extra time of their FA Cup 4th round replay. He scored a fantastic injury-time volleyed equaliser to take the tie to extra time.

MATCH REPORT:
"Deep into injury time and with Eastwood up for a free kick, Holland showed great technique to volley a dropping ball through a packed six-yard box and somehow, improbably, forced the game into an extra 30 minutes."

31' CLOSE for the Yellows. Mackie turns and shoots bringing out a flying save from Darlow. Holland's ball back across falls for Long, whose shot is cleared off the line.
36' Dickie's long ball down the line is kept in and crossed by Sykes. Holland races in to shoot but the ball is just over.
44' Holland races clear and finds Brannagan. His shot is blocked and the ball comes back to Sykes, who fires wide.
52' United come forward through Holland. He gets the ball wide to Brannagan who keeps it in and crosses but the visitors clear.
75' Great work by Holland on the left to collect the ball and get past Schar. His low cross is ****ed just wide by Taylor.
86' Holland's ball forward clips a Newcastle player and goes for a corner.
90+4' GOOOOOAAAAAAAALLLLLLLLLL HOLLLLLLLAAAAAANNNNNNNDDDDDD. WHAT A GOAL Pt.2. The free kick comes over, the ball is knocked back to Nathan HOLLAND on the edge of the area and he lashes it past Darlow to surely force extra time.
91' United straight on the front foot and from Holland's cross Taylor's effort is blocked by Ritchie. Agyei collects the loose ball, plays it back to Brannagan, who shoots just over.
99' United on the attack. Agyei's cross is cleared out to Holland whose shot is blocked. U's asking all the questions now.

Next Match: Sat 8th February vs Peterborough (a)

Nathan Trott keeps a clean sheet against 3rd placed Peterborough, who since that defeat have won 4 in a row scoring 12.

His reward is to be dropped for a 29 year old whose only real experience is in League 2 with Newport. Must be more to that?
Top

Peterborough keep up their 3 goals a game average since Trott kept them out, whilst Wimbledon concede another 2 and are losing again.
Top

Jordan played as QPR lost 0-2 at struggling Huddersfield. He was booked midway through the first half for a foul.

MATCH REPORT:
"Both sides had early openings with Lewis O'Brien flashing a shot wide for the Terriers before Jordan Hugill struck the side netting."

9' Good move from the R's. Eze floats a cross towards the far post and Hugill volleys into the side netting.
26' Hugill goes into the book. He commits a cynical foul and is cautioned.

Next Match: Tues 11th February vs Swansea (a)

Josh played as Charlton lost 1-3 at struggling Stoke, who move ahead of Charlton in the table. He was booked late in the match for a foul and was involved in the build up to Charlton's late, first-half equaliser.

MATCH REPORT:
"Charlton could have taken the lead against the run of play in the 17th minute when Jason Pearce came inches away from getting on the end of a Josh Cullen corner, any touch from the centre-half, three yards out from goal, would have put his team 1-0 up."
"Andre Green played a neat one-two with Josh Cullen to get in behind Bruno Martins Indi on the right wing. The 21-year-old curled in a dangerous cross on Purrington was on hand, arriving at the back post, to volley in from six yards out."

57' Taylor nods a header wide from Cullen's free-kick.
81' Cullen booked for a trip.

Next Match: Tues 11th February vs Nottingham Forest (a)

not in squad (injured)

Next Match: Weds 12th February vs Reading (a)

Next Match: Tues 11th February vs Shrewsbury (a)

Nathan played 23 minutes as Oxford were crushed 4-0 by in-form Peterborough, who played for 30 minutes with ten men..

66' SUB for United: Mark Sykes is replaced by Nathan Holland.
81' Mackie crosses low to Holland but he sidefoots the ball over from 15 yards.
83' Browne's deep cross towards the back post is just missed by both Holland and Long.

Next Match: Tues 11th February vs Burton (a)

Next Match: Sat 15th February vs Mallorca (a)

MATCH REPORT:
"The Grecians got stronger as the game went on, but could not finish the opportunities they were creating and were made to pay with 10 minutes remaining when Sweeney was robbed of the ball and it was played to Daniel Kemp to lash home."

10' - Decent passage of play from Stevenage in the opposition final third. It ends with Kemp being found inside the box not quite picking out Jackson, as Ward claims the cross.
21' - CHANCE! Cassidy so close after being picked out by Kemp. He swings his right foot at the cross but it's deflected narrowly wide of the post.
56' - Good move between Kemp & Jackson as the latter is released down the left - he tries to pick out Parrett but it's just behind him.
59' - Kemp with a chance. He strikes the ball well from the edge of the box but it's wide of goal.
80' - GOOOAALLLLLLL DAN KEMP!!! 1-1
FULL-TIME... Kemp's magic moment comes to nothing as Exeter take all three points.

Next Match: Tues 11th February vs Bradford (a)

Next Match: Fri 14th February vs Breidablik (a) - Pre-Season Friendly

Struggling Stevenage were beaten by promotion-chasing Exeter, edging them a step closer to dropping out of the Football League.

The hosts dominated much of the play in the second half, but Stevenage were briefly level when Daniel Kemp scored on 79 minutes.

Their joy was shortlived, though, as Matt Jay scored the winner just two minutes later.

The visitors made five changes from their 3-0 home defeat to Leyton Orient a week earlier, as new signings Kemp, Patrick Reading and Canice Carroll all made their full debuts and Tom Soares and Simeon Jackson also came into the starting XI.

On 20 minutes, Kemp got to the byline on the right wing and found Cassidy at the near post but his shot was deflected wide.

Stevenage's equaliser came against the run of play on when new boy Kemp stole in on the right side of the box and fired past Lewis Ward for an unlikely equaliser.

OXFORD United endured a tough afternoon as they lost ground in the play-off race with a thrashing at the hands of in-form Peterborough United.

United brought on Nathan Holland and Liam Kelly as they searched for a way back from two goals down, as they had managed against Newcastle in midweek.

Missed a big chance late on 5