My Dad always used to tell me about the 'mudlark' cup semi final.

Payet's goal away at OT in the FA Cup quarter final.

Best free kick I've ever seen. Was right behind it in the East Stand upper, right in the God's. What a moment.

Last day at UP obviously the other stand out for me.

the first ever televised game was us against them - i remember bryan robson shooting just over the bar and the ball hit me in the stomach and winded me, i got my own back the next season as i laughed at him for dislocating his shoulder after a couple of minutes at our place - god knows what years they were though.
Top
Online

Barthez, give us a wave. 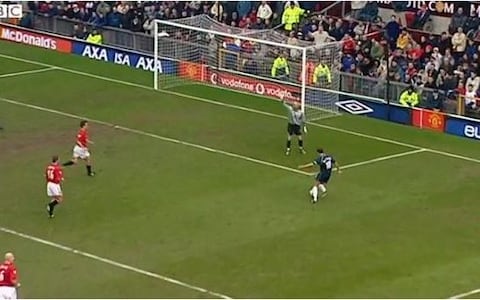 That one also sticks in the mind for me. Nice day in London, by the time we got off the train in shirt sleeves in Manchester one of those old temperature signs said 10 degrees. Talk about a North / South divide. Terrific game - us two up. Two all then they hit the bar before Frankie Mac, The Mancs were not happy bunnies that day - - a certain ferry trip earlier that summer had riled them. Most of them seemed to be doing the slit throat gesture.

Main other memories - the Paolo cup game. After all the hammering I'd seen us take up there I promised I'd retire from OT after that one. Was drawn back for the lat game of the season in 2007 and yet another end-up-pretty-much-horizontal goal celebration. Haven't been back since.

In Ince's return to UP he got all he deserved. I swear he played within ten yards of the centre circle the entire game through fear until he popped up with a very, very late equaliser. My last half-memory not seen on here yet was us singing "sacked in the morning" as we beat them three one at UP in the early eighties. Can't think who the manager was though - Dave Sexton I'd guess.
Top

Im sure plenty here were at the May 1977 game at home on a Monday night when we needed to win to avoid relegation. Man U were playing in the Cup Final on the Saturday and had Coppell, Pearson, Hill, Macari playing for them. We had 11 english players regularly in those days.

Standing on the South Bank, Gordon Hill scores after 25 seconds, Geoff Pike missing a penalty and almost missing the North Bank at the same time.

Pop Robson scoring two second half goals in front of us.

The 2 points kept us up that season, although next season we fell through the trap door this time losing at home to Liverpool on the last day. relegation threat was an annual event under Lyalls teams in those days despite having Bonds and Brooking playing.

Hi Dave, am I right in thinking Lancashire were at home
And they pelted us with anything they could when it was bitterly cold, and the police escort peeled of to let us mingle with the inbreds in red
Top

Billy Bonds boots wrote: ↑
Thu Sep 19, 2019 12:57 pm
Hi Dave, am I right in thinking Lancashire were at home
And they pelted us with anything they could when it was bitterly cold, and the police escort peeled of to let us mingle with the inbreds in red

Don't know about Lancs playing mate - we'd have got there after play opened so that would have passed me by.

We got there on what was either a football special or a really old normal train. Either way it was rammed with us. We were escorted by police from a station (can't remember it's name) in Manchester nearer the ground than the main stations. I don't remember any trouble / hassle on the way to the ground but I guess it might have been afterwards you're talking about the pelting? I can't remember anything happening after the game.

Anyway the quality of the vid isn't brilliant but the memories are ...

The funny thing about the May '77 game was it left me convinced that we'd always get out of trouble. I was certain we'd beat Liverpool the following season and couldn't believe we'd lost. I've learnt since then....

The ref for the 4-2 win - was it Clive Davies? - holding his head in his hands when we nearly scored, in a 'that was so close' kind of way (think we were already in front but could have scored ten). Also the first 'All Ticket' game I can recall at UP, after all the shenanigans the season before.
Top

My first ever game was at Old Trafford. We went on a school trip from Ireland. It was 1992 maybe? I was 15 I think.
We lost 3-1 IIRC. McAvennie scored for us and McLair and Robson scored for them. Can’t remember who got their third.
Ian Bishop got wolf whistles every time he touched the ball.
All the other kids were Manchester fans and I was the sole Hammer. Got serious grief the whole trip.
Top

1975 game at UP was the first time I'd seen proper aggro before during and after a game. I was only just 10 and my Dad said he wasn't going to take me anymore. Luckily he caved in and we were back in the new year 1976.

I've only been up there once, the much celebrated FA Cup win with Barthez marooned in front of 10,000 of us. I vowed never to go back as it was such a perfect day.

The farewell game at UP was another perfect day. Twas almost as if it was scripted.

Thanks for reply and video Dave, yes was definitely a special laid on think Gary firmonger was working on it for the club at the time, oh mate old Frankie, and to see old Trafford so empty was quite eerie at the time
Bit like Chelsea thanks again

Went to the Defoe game we won 1-0 at Old Trafford. Ticket was in the Man U season ticket holders end, my friend from school had just moved up there as his mum had remarried and he was an Old Trafford ST and had a few spares.

I was 14 and got the train up on the Friday after school. That night my mates step sister came into the spare room at about 3am and basically launched herself at me. Great night, totally unexpected. Saturday however, I felt absolutely awful. Was throwing up and dizzy. Manned it to the game and remember very little other than spewing up at my feet a few times and the guy next to me going absolutely apoplectic at the Red Mancs at full time.

That night, having only been married two weeks, my friends mum and his step date had a blazing row, he punched her (apparently, I don't believe it, he seemed a good guy and she was a head case) and she packed my mate and I into her car at about midnight and drove back South. I was sprawled out in the back seat throwing up into a carrier bag for the entire journey. Apparently she never spoke to him again and annulled the marriage via a solicitor a few months later.
Top

Also went to the return fixture in 2000/01 season. Travelled up to Manchester on a minibus on New Year's Day. One of the local pub landlords somehow managed to get a few tickets for every Man U home game. Again went with my Man U supporting girlfriend at the time, plus two fellow West Ham supporters joined me so I wasn't totally outnumbered on the trip up. Was in the Trafford pub before the game and was talking to some old fella who lived near the Man U training ground. He was telling me stories about the 'Class of 92' players before that term was coined many years later. Conversation was going great until an ex one night stand of mine turned up out of the blue with her Man U supporting boyfriend. The odds on that happening must have been astronomical! 1st thing she shouted to me was "What are you doing here, you're a West Ham supporter". Killed the conversation dead with the old guy I was talking to, think he was under the impression I supported the reds

As for the game, wasn't much of a performance by our lot, although Freddie Kanoute scored a great header down our end where we were sitting. Instinctively me and my two fellow Hammers who were sitting together instinctively got up and shouted "Yes". My girlfriend was sat the other side of me and the landlord who got the tickets was right behind me. As soon as we sat down they both said "I can't believe you lot just done that". Couldn't help it, such a natural reaction to celebrate the goal. Could hear the Man U fans getting louder then around us after we scored. Was hoping they hadn't taken too much notice of the 3 of us getting up and was sort of hoping we wouldn't score again for fear we may have had a few slaps. Game finished 3-1 to them, and on the long journey home, I thought to myself I wished I had stayed in my home town and gone on the piss all day instead.
Top

Ive had a go already about 6.30 this morning but I cant believe I forgot about Geoff Pike's header F A Cup 1986 IIRC think we that one 2-0 but Pike's header at the Stretford End was a veritable thing of beauty

Edit: I can't the swear filter has done me on Geoff Pike's nickname. I must be a racist.

Was just about to add that video , Dave as Geoff Pike's goal just came to mind - one of the BEST headed goals by a West Ham player I'd ever seen apart from perhaps Valencia's against [ Burnley was it ? ] , no , I think Pike's was better actually .
Top

Apologies if already mentioned - 1995 , Manchester United needed to win at West Ham and for Liverpool to do them a favour by beating Blackburn and they would have won the Premier League Title - Liverpool kept their side of the bargain but nobody had told Ludek Miklosko , the game ended 1-1 with Alex Ferguson describing the West Ham players' effort as ' obscene ' .

One of my most enjoyable seasons as a youngster following West Ham was the 1972/73 season - after the previous season's disappointment of going out to Stoke City in that marathon League Cup Semi Final we gave the First Division Championship our best shot in around 15 years eventually finishing in 6th spot and with Bryan Pop Robson topping the Goalscorers' Charts with 28 goals .
That season we beat Manchester United 3-0 with goals coming from Clyde Best , Pop Robson and Geoff Hurst , Manchester United finished in 18th spot , the following season they would be relegated along with Norwich City and Southampton .
Top

Don't know about better but Geoff's goal is by far my fave - think he must have been 16 yards out. Don't think I'll see another one like that again, ever . . .
Top
Post Reply
85 posts