Thanks for the update, Vietnammer. I only met George the once, with you, HD1 and some others in the Black Lion.

I had a great chat with him over a couple of beers. He had many interests and was passionate about most of them.

I understand that he could be spiky and hand out asbo’s when posters crossed a line. When I passed the 1000 post mark he congratulated me on getting that far without incurring a ban or two.

All the best, amster

One of the names I forgot from my Wakefield list

Met him on a few occasion in the pub and the online persona was nothing like he was in the flesh.

RIP George, I remember him as a regular and interesting poster. Does anyone else remember the time pretty much everybody changed their avatar to Amsterhammer's picture?

Condolences to his family
Top

A tremendous bloke. Funny and mad with a fabulous turn of phrase. RIP AH.
Top

A blast from past. Sad news. RIP fellow Hammer
Top

I joined under a different name back in 2003. Remember AH well and enjoyed his posts . A real down to earth,and funny guy. God Bless AH.
Top

A Mod when I joined.
Seemed a great guy RIP
Top

Hampshire Hammer wrote: ↑
Thu Jan 23, 2020 9:23 pm
Does anyone else remember the time pretty much everybody changed their avatar to Amsterhammer's picture?

Yes! And someone else (goes2eleven?) re-worked the Being John Malkovich film poster to Being Amsterdammer, replete with multiple pics of his fizzog.

I'm getting pics on FB of he & the Amsterdam Hammers gathering in local boozers (but don't know how to share them on here). There's also a couple from the Black Lion with some KUMB 'faces'.

Wish I hadn't said the 'spiky' bit, which ignores the warmth and humour of the man.
Top

Hampshire Hammer wrote: ↑
Thu Jan 23, 2020 9:23 pm
Does anyone else remember the time pretty much everybody changed their avatar to Amsterhammer's picture?

I think I remember that, I know that my current avatar has stuck since AH’s campaign to get everyone to change their avatar to the badge, possibly in support of a play off final, possibly the 2006 FA cup.
Top

George 'Amsterhammer' Levine was a member of KUMB's original moderating team and played a major role in helping the site develop into the hugely successful entity it was to become.

A colourful character who always spoke his mind, he was an occasional visitor to these shores despite being based in the Netherlands and partook in several knees-ups in KUMB's original home from home, the Earl of Wakefield, the stage of many a legendary post-match (and occasional pre-match) shindig back in the early days of Knees up Mother Brown.

He definitely made it to at least one Cardiff play-off final too, but I can't recall for sure which one.

Although it's been a while since we last had the opportunity to chat and since he contributed to KUMB, it saddens me greatly to learn of George's passing. But having been told many a tale of of his (often hilarious) exploits over the years, there's no doubt whatsoever that his was a life well lived. 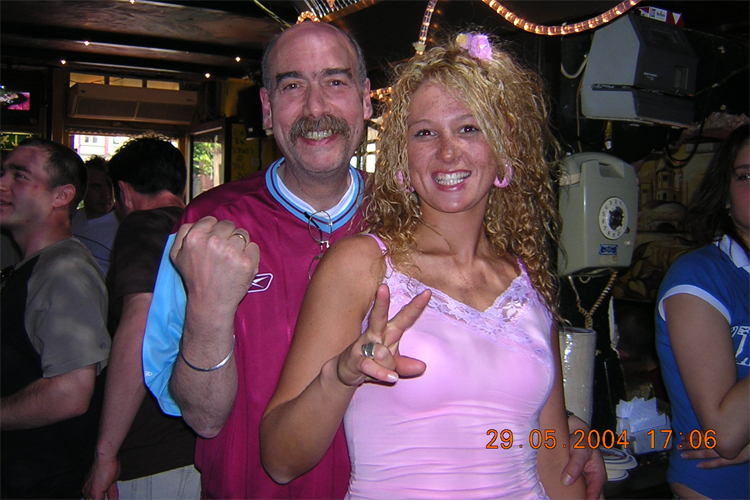 I remember him as a good poster.

Nice tribute UTJ. Think you probably knew him better than I did given that kind of involvement.

vietnammer wrote: ↑
Thu Jan 23, 2020 9:49 pm
Think you probably knew him better than I did given that kind of involvement.

That seems rather unlikely V given that you've kept in touch over the years (now you mention it I recall you saying you'd remained friends), but he frequently made me laugh with his tales from his younger days in the '60s and '70s. One of the first big characters on here.
Top

Sad news. He was one of the best posters on here and it was a shame when he left the site. RIP.