All discussion relating to international tournaments including qualifying groups/matches. Since 2006.

'Drunken and drugged up thugs' could have caused death


"Ticketless, drunken and drugged-up thugs" could have caused death as they stormed Wembley before the Euro 2020 final, says a review into the disorder.

The report by Baroness Louise Casey said there was a "collective failure" in planning for the match, which about 2,000 people got into illegally.

Lady Casey said the "appalling scene of disorder" as England played Italy led to a "day of national shame".

Her report said there was a "collective failure" in planning for the match on 11 July, including a "vulnerable" stewarding operation lacking experience partly because of the pandemic and the police deployment arriving "too late".

The knowledge that about 25,000 of Wembley's 90,000 seats would be left empty because of Covid restrictions contributed to a "perfect storm" of factors.

"Our team of role models were in our first major final for 55 years. However they were let down by a horde of ticketless, drunken and drugged up thugs who chose to abuse innocent, vulnerable and disabled people, as well as police officers, volunteers and Wembley staff," said Lady Casey.

"We are genuinely lucky that there was not much more serious injury or worse, and need to take the toughest possible action against people who think a football match is somehow an excuse to behave like that.

"I am clear that the primary responsibility for what went wrong at Wembley that day lies with those who lost control of their own behaviour."

A pretty damning report laying the blame squarely on the 'supporters'. The FA has accepted the report; "We fully accept the report's findings and there are important learnings for us, as well as other agencies involved,"
Top

A pretty damning report laying the blame squarely on the 'supporters'. The FA has accepted the report; "We fully accept the report's findings and there are important learnings for us, as well as other agencies involved,"

I think it's primarily a security issue. Not defending the fans, it's a scummy thing to piggyback a disabled entrance, but ultimately people will try and get into an event that is very exclusive (compared to demand) and the tickets are worth hundreds of pounds. You have to hire sufficient security to stop that and they didn't.
Top

I think it's primarily a people being c***s issue.
Top 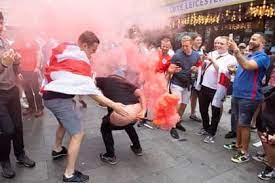 What’s to be ashamed of,this is England.
Top

It was not our finest hour, I think it’s fair to say.
Top

Just a normal Saturday night in most city and town centres at 11pm outside and inside pubs.

Yet football gets reported on.

Already just witnessed 2 20 year old girls peeing in the road on way home from restaurant with my children.

Yet forbid an football fan doing this huh???
Top

Oh yeah, I was definitely saying that it's okay for people to behave like dickheads at other times.
Top

Yet football gets reported on.

I'm sure there would be the appropriate outrage if 5.2bn people were tuned in to watch chucking out time at the Dog 'n Duck and see Sharon and Tracy pissing in the gutter.