The Telegraph has it and doesn't seem to be behind their paywall (probably because they want the World to know how bad we are).
https://www.telegraph.co.uk/football/2022/09/22/football-crime-rise-west-ham-united-worst-alarming-figures-show/

The S*n has it - I'm not posting a link to that rag but you can find it yourself: 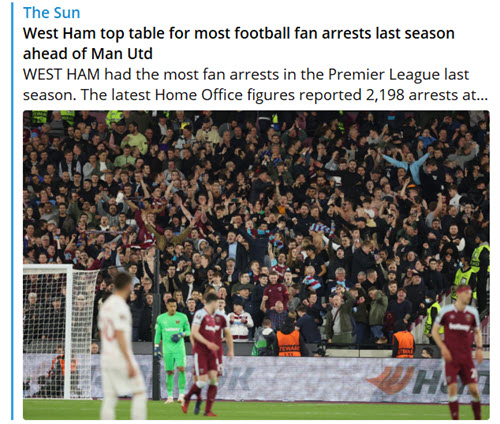 Probably the same bloke 95 times, there's always one that let's the side down
Top

Have Sky Sports News and BBC made this their main headline yet? They normally like to highlight any bad behaviour by our club.
Top

94 of the arrests are probably us fighting our own !

Did you know one person gets knocked down every 2 hours. And by Christmas he'd had a gut full.

That number will double once Antonio starts his Christmas shenanigans again

Does it show arrests as a % of ticket sales/attendance?
Top

Knighter10WHU wrote: ↑Thu Sep 22, 2022 3:37 pm I wonder if the national newspapers will discuss how many of these were actually convicted of the "crimes"

It's a good point. Bearing in mind most of these crimes now carry an automatic banning order and the highest amount of banning orders were at other clubs and the numbers were in the mid 30's it does make you wonder a) how many of these arrests led to convictions.
b) what these convictions were actually for.
I'd also like to know how many were at our own ground compared to away matches.
Top


For clarity -this is not a dig at the Met or any of their serving officers. It's an illustration of how small the number of aressets at football is.
Top


For clarity -this is not a dig at the Met or any of their serving officers. It's an illustration of how small the number of aressets at football is.

PP I am intrigued what is your proportionate comparison based on ? obviously arrests / total attendance what is your denominator for unarmed people shot ?

I do think that a more reasonable comparison between clubs would incorporate total attendance, which includes numbers of games and would dilute our stat hugely.
Top

My personal opinion and just a general observation from attending most away games.

Due to COVID there wasn't much activity for the police to get stuck into and now with the risk of their budgets being cut they're keen to make up for lost time and make an arrest at any opportunity, when simple common sense would resolve the situation.

As Knighter has said would be very interesting to see the convicted rates rather than just arrests.
Top

If it is based on arrests at the London Stadium, we had 27 home games last year, the vast majority sold out with around 65k people in attendance. that would give you around 1,755,000 fans through attending the Stadium over the season (including a very lawless bunch of Frankfurt fans, a few other lively European visitors and a huge contingent from Leeds in the cup).

95 people arrested out of 1.75m over the season isn't a lot in the scheme of things. It is around 3.5 people per game.
Obviously it isn't great that anyone gets arrested, but 3 or 4 per game with 65k in attendance is actually surprisingly low.
Top

So, we get in trouble and a fine a few years back for a pitch invasion.

Last season, the world and his dog seemed to have a pitch invasion but we didn’t. Rather than be the good news team for a change the powers that he decide to group up arrests and pitch invasions as one combined issue and headline us as the main culprits….

Did the clubs who had pitch invasions last year get fined? What happened about Frankfurt away, can’t seem to find anything saying they were even fined?
Top