Knees up Mother Brown is a member of the Football Supporters' Association. 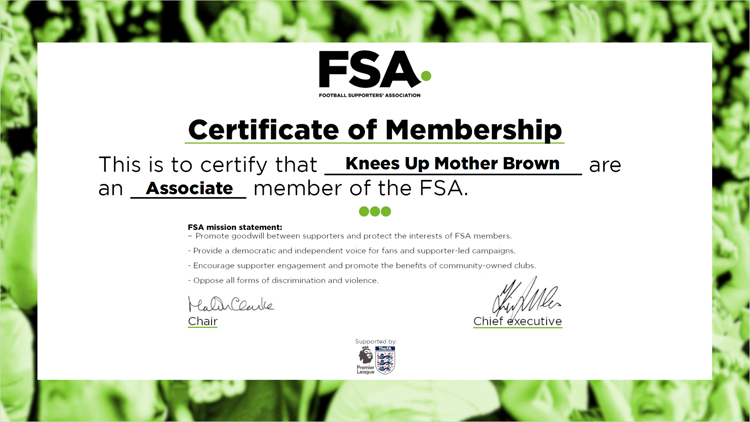 The 'Safe Standing Campaign', 'Twenty's Plenty for Away Tickets' and 'Watching Football Is Not A Crime!' are examples of ongoing campaigns which the FSA has led in the past.

The Football Supporters?EUR(TM) Association is secretariat to the All Party Parliamentary Football Supporters Group. The cross-party group is chaired by Ian Mearns MP, a season ticket holder at St James?EUR(TM) Park (Newcastle), and aims to strengthen the voice of football fans in Parliament.

The FSA works in close collaboration with 'Supporters Direct' and 'Level Playing Field' (previously known as the National Association of Disabled Supporters).

FSA Chair Malcolm Clarke sits on the FA Council as the fans?EUR(TM) representative (on behalf of the FSA and Supporters Direct), whilst the FSA also has good relations with other campaigning organisations such as 'Kick It Out', 'Liberty' and 'Show Racism The Red Card'.

The FSA is a democratic organisation with an elected National Council which oversees campaigns and policy. Policy is set by members and affiliated/associated supporters?EUR(TM) organisations at the FSA?EUR(TM)s Annual General Meeting.