Having started pre-season in fine fashion with a 6-2 win in Cork last weekend, Sam Allardyce's team continued in a similar vein at Meadow Park tonight.

And it was two first half goals within the space of a minute that did for the home side, who are celebrating their 65th anniversary this year.

New signing Razvan Rat, making his second appearance in claret and blue played a major part in West Ham's opener. It was his cross that was almost turned into his own net by Ben Nunn before Ravel Morrison applied the finishing touch.

With the home side still reeling from going a goal behind, United doubled their lead when Ricardo Vaz Te climbed highest to meet a Mark Noble cross, which he diverted expertly into the back of the net.

Despite dominating the game throughout, West Ham were forced to wait until seven minutes from time before adding a third and final goal. This time it was captain Kevin Nolan who volleyed home from inside the box to complete a comfortable victory.

You may view the goals here...

It was a special night for young Hammers fan Teddy Davies, who, thanks to KUMB.com and West Ham United FC, got to meet his heroes before the game. Here he is holding a pennant signed by all the first team squad with Hammers midfielder Jack Collison. 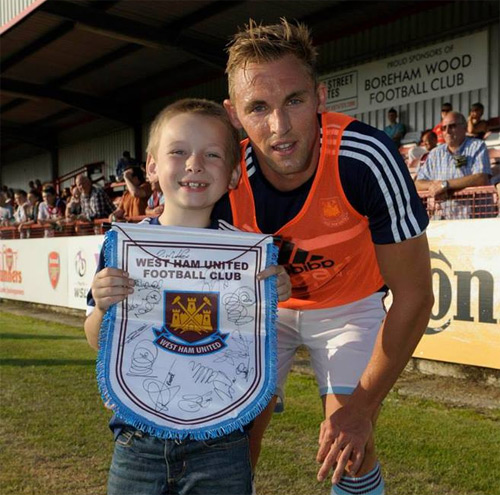