A second half brace from Ravel Morrison helped West Ham to a morale-boosting victory against one of Portugal's 'big three'.

Sporting - who along with Benfica and Porto complete the triumvirate of Portugal's domestic giants - were considered favourites to win the Torneio do Guadiana going into the competition.

However the tables were well and truly turned as the Sportinguistas were well beaten by a West Ham team consisting of a mix of first team and fringe players, on a night to remember for the small group of travelling Hammers fans who were able to make the trip to the Algarve.

Having started strongly, West Ham went agonisingly close to opening the scoring when Joe Cole's 13th minute effort cannoned back off the inside of the far post. Kevin Nolan was left with egg on his face when he failed to convert the rebound; an open goal which he put clean over the bar.

Tempers flared on the half-hour mark when a poor challenge on West Ham striker Modibo Maiga sparked a free-for-all after the United striker reacted angrily to what was just the latest of a string of poor challenges on him. The resulting melee saw both Maiga and his nemesis booked, presumably for sparking the incident.

Despite their first half dominance, West Ham were to go into the break a goal behind after Sporting scored from the penalty spot in first half injury time. Matt Taylor was justifiably angry at being penalised for handling a ball that was struck at him from point blank range; his protests in vain, Spanish forward Capel stepped up to send Jussi Jaaskelainen the wrong way.

With Taylor replaced by Razvan Rat at the break, West Ham continued to look the stronger side and got their reward 12 minutes after the restart. Sporting were caught flat-footed as a quick throw was nodded into the six-yard box by Maiga, where Nolan was waiting to pounce in typical fashion.

Still reeling from conceding the equaliser, Sporting found themselves a goal behind just 60 seconds later when a bursting run from midfield by the impressive Ravel Morrison culminated in the teenager firing across goal into the bottom left-hand corner to put West Ham 2-1 ahead. 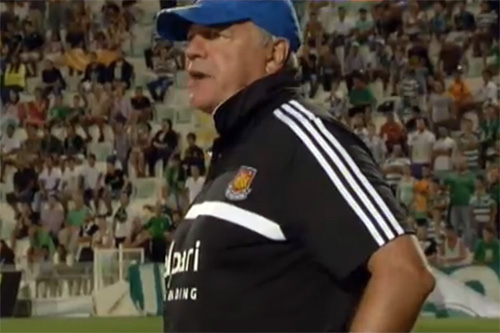 The game should have been put to bed with just over ten minutes of normal time remaining when Man of the Match Morrison grabbed his second goal of the evening. Joe Cole, who was also excellent throughout curled in a cross from the left touchline which an unmarked Morrison guided into the bottom corner of the net.

However Sporting ensured that the audience - both in the stadium and around the globe via the internet - were kept on tenterhooks until the final whistle when Eduardo's 84th-minute free kick appeared to miss everyone before finding the back of the net.

William Carvalho may have got the slightest of nicks but either way, it was poor defending from West Ham (even if the free kick that led to the goal should never have been awarded against Joe Cole, whose shoulder to shoulder challenge was within the laws of the game).

A frantic few minutes of injury time followed before the final whistle confirmed what was a very impressive win for an experimental United side. Sam Allardyce will no doubt be delighted at what he saw - and, in particularly, the performance of Ravel Morrison who continues to impress in pre-season.

* A post-match penalty shootout to decide tournament placings in the event of a tie ended in a fairly unique 4-4 draw. Mark Noble, Elliot Lee, Matt Jarvis and Joe Cole converted their spot kicks whilst Ravel Morrison was the only Hammer to miss.