Well, it's finally arrived. After all the Sky Sports hype and media nonsense, the season started fairly innocuously for West Ham fans. Downing's arrival was welcomed but really all the press was aimed at Cardiff and their rampant return to the Premier League.

I remember watching West Ham lose to Cardiff City in the first game back in the Championship two seasons ago. We had the Real Madrid of the league for that game. Parker, Nolan, Noble all in midfield who absolutely dominated. We lost to a late goal from Kenny Miller in what was ultimately a scandalous result. Thankfully Big Sam improved the team and we mercilessly dismantled Cardiff in the play-offs, on the way to promotion.

As the buzz at the Boleyn increased towards kick off, you couldn?EUR(TM)t help but feel West Ham?EUR(TM)s star was in the ascendancy once again. The electrifying response for Billy Bonds?EUR(TM) inaugural lifetime achievement award before kick off, set the tone for what would be a solely Claret and Blue afternoon in East London.

The pundits always talk about the ground rocking but today it really was as the teams came out. Our attention was jolted slightly by a Cardiff fan who elected to set off a flare in the away end. That's right folks, a flare. This caused great amusement amongst the West Ham fans, and the security moved in and quickly ejected the culprits. Thanks for coming.

The game started furiously and West Ham were in the driving seat. Many chances were created and in particular the Hammers picked up where they left off last season, looking dangerous at set pieces.
Their perseverance was rewarded when the effervescent Matt Jarvis skinned Matthew Connolly and powered a low cross into the middle. Joe Cole pirouetted like a ballerina before slotting the ball masterfully into the bottom right hand corner on 13 minutes.

West Ham continued to play the better football and although Cardiff had the majority of possession during the game, the home side always looked more dangerous. Joe Cole got the better of the Bluebirds defence, only to skew the ball over the bar. Mo Diame also had a shot deflected just inches wide. Cardiff City looked dangerous on the break, especially through Kim Bo-Kyung who had a long range effort before the break, but the first half ended 1-0 to the Hammers. 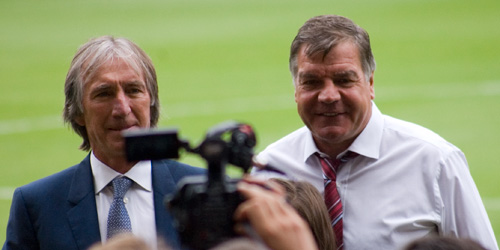 Cardiff started brightly in the second half and had a few good chances but really lacked any firepower in the final third. Frazier Campbell worked hard but was ultimately isolated and lacked quality service up front. In fact, Cardiff City only managed a single shot on target throughout the match and will be keen to get highly-rated new signing, Andreas Cornelius, into the side.

The West Ham faithful warmly welcomed the arrival of Stewart Downing in the 71st minute who started very brightly. But it was Mark Noble who ran at the Cardiff City box and found Nolan in space, who hit an exquisite first time shot into the top left hand corner with 14 minutes left on the clock. Two great finishes won the game for the Irons, but the build up play and passing was something to be admired, especially for a team much maligned as nothing but Allardyce?EUR(TM)s long ball merchants.

Joe Cole was substituted late on and received a standing ovation from the Boleyn Ground faithful. He was also named as the sponsors' Man of the Match in what was a mercurial display of his talents.

It was disappointing not to see Ravel Morrison get a bit of game time after his outstanding pre-season, but I am sure his time will come.

There are also concerns up front when Andy Carroll is not fit. Modibo Maiga worked hard but ultimately doesn?EUR(TM)t provide the threat that Big Sam will be looking for. Luckily, if the rest of our attacking players continue in the way they started today, there should be plenty more West Ham goals to celebrate this season. 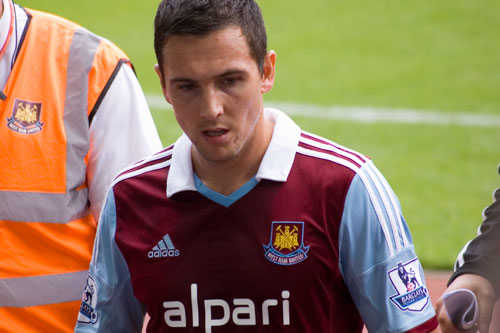 Click to view all match reports by Trevor Twohig

Guy Demel
Not much to do defensively and he contributed well on the attacking side of things. Some nice signs of a proper understanding with Cole beginning to develop.

Joey OâBrien
He?EUR(TM)ll have tougher afternoons but coped perfectly well with the little that Cardiff gave him to deal with. Roland might have to wait a bit.

Winston Reid
Pick of the defence. Seems to have carried on where he left off after last season. Barely a foot wrong.

James Colins
A typically unfussy display from Ginge. Distribution not his strong point but there again that?EUR(TM)s not what he?EUR(TM)s there for.

Mo Diame
Busy bustling display from the big fellah. Played a major part in both goals.

Mark Noble
A quietly efficient 90 minutes. A couple of needless fouls given away ?EUR" something he?EUR(TM)ll have to watch.

Joe Cole
Fine finish for his goal. Could possibly have added another one or two. Less influential in the second half.

Matt Jarvis
Set up the first goal and looked lively ?EUR" though he can only perform if he gets the service that became less forthcoming as the match progressed in the second half.

Kevin Nolan
Looking back through the match report I barely mention the skipper. This was basically because his work was largely performed off the ball. The closing down, chasing back and generally running his legs off were all a major contribution to the victory, if not an obvious one. I, what was a fine team performance it?EUR(TM)s difficult to single anyone out for MOTM and it?EUR(TM)s a toss up between Nolan and Reid for the honour. It came down heads. Sorry Winston.

Modibo Maiga
Difficult for the lad as, when we play him in on the deck he looks useful. Did a lot of useful chasing down, though he was a little too ponderous in getting back onside on occasion for my liking.

Stewart Downing
Nice little cameo from the new-boy who seems to have a point to prove.

Alou Diarra
Came in to do a holding job for the last ten or so. Did ok.

Ricardo Vaz Te
Might have done better with a late shot but otherwise given little time to have much of an effect.

Adrian
Did not play.

Razvan Rat
Did not play.

Ravel Morrison
Did not play.