Sam Allardyce was far from happy at the decision to award Sunderland a first half penalty - but could have been rueing a second had referee Phil Dowd not blundered again.

The Hammers boss was left seething on the touchline when Dowd awarded the home side a first half penalty after Adam Johnson took a tumble in the box following the slightest of nudges from James Tomkins.

However he was equally relieved that Dowd failed to award a second spot kick to the home side when Winston Reid clearly handled the ball in the area 18 minutes from time.

In the end a point each was probably a fair result from a game that ebbed and flowed, with both sides having a series of chances to win the game.

Whilst West Ham created the better opportunities and could lay reasonable claim to being stronger on the day, they still had Adrian to thank for preserving a point with a stunning save late on.

Both goals arrived in a busy first half; Gomez sent Adrian the wrong way from the spot on 21 minutes after the hosts had been awarded an incredibly soft spot kick following James Tomkins' intervention as Johnson drove into the penalty box.

The Sunderland winger had no hesitation in throwing himself to the ground upon feeling a nudge from Tomkins, whose challenge was clumsy but not worthy of a penalty. The angry protestations of both Tomkins and Allardyce were ignored.

But their joy was to be shortlived - eight minutes, to be precise - before a former Black Cat levelled for the Hammers. A trademark strike from Stewart Downing, who spent a short spell on loan at Sunderland several years ago restored parity for West Ham moments ahead of the half hour mark.

Drifting in from the right flank, Downing beat 6'8" 'keeper Costel Pantilimon, albeit with the aid of a slight deflection, low to the 'keeper's right to make it 1-1 - just as he had at Crystal Palace earlier in the season.

That's how it stayed until the final whistle - somehow - although both teams had their goalkeepers to thank for that being the case.

Pantilimon was called into action as early as the sixth minute when he denied Carl Jenkinson from close range after the marauding full back had squeezed his way into the penalty box.

Meanwhile Adrian had to be at his very best to deny substitute Steven Fletcher five minutes from time with a superb fingertip save. The striker's fierce drive was heading for the roof of the net before the Spanish's stopper's intervention almost certainly saved a point for the Hammers.

West Ham could have had the game won by then - Andy Carroll being most guilty of missing a gilt-edged chance on 64 minutes, when the ball broke to him from a corner but he could only chip an effort onto the roof of the net.

It was a frustrating day for the England striker, who has been outstanding against Swansea at the Boleyn last weekend. He was left just as annoyed in the final minute of normal time when he drilled a shot narrowly wide of the post, with the goal at his mercy.

Yet had 'dozy' Jozy Altidore - without a goal in his last 28 Premier League appearances stretching back to last December - tucked away the game's best chance on the stroke of half time, the points may have already have been won by then.

Fortunately for West Ham, Gomez's low centre got caught under Altidore's feet and he failed to convert, despite having the goal at his mercy.

The draw ensures West Ham once again end the weekend in the Champions League spots, level on points with Manchester United (who face Liverpool tomorrow). 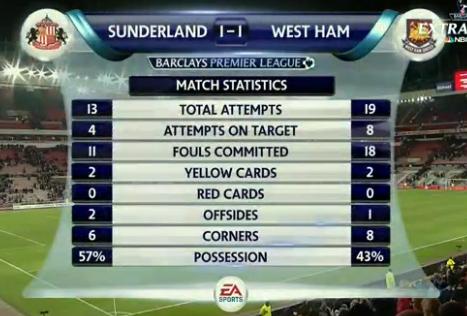 Adrian San Miguel del Castillo
Went a little too early for the penalty but redeemed himself with a stunning save five minutes from time.

Carl Jenkinson
Got forward as often as possible and could (should?) have scored with one of his two chances in the opening quarter-of-an-hour. defensively sound, for the most.

Aaron Cresswell
Like Jenkinson provided a real threat out wide. Got caught out of position once or twice but that's the flip side to employing attacking full backs.

Winston Reid
Put his body on the line time and time again with someexcellent tackles and interventions. Lucky not to concede a penalty for a clear hand ball, though.

James Tomkins
Since he was forced to apologise for feigning injury against Everton, Tomkins has been excellent. He was solid again today and was unfortunate to be penalised for Johnson's cheating.

Kevin Nolan
A solid if unspectacular shift in the centre of the park. As usual he worked his socks off to protect the back four and help launch attacking forays.

Cheikhou Kouyate
Still struggling to replicate his early season form. A couple of early mistakes could have proved costly, although he grew into the game.

Alex Song
He is the difference between West Ham being fourth or tenth and sees passes no-one else in the squad is capable of. Whether it's cheeky little backheels in midfield or playing his way out of danger from inside his own six yard box, Song is simply a joy to watch.

Stewart Downing
Every counter attack goes through Downing - and there were plenty yesterday. Another great goal identical to his two others this season.

Andy Carroll
Worked like a Trojan for scant reward. Probably no less effective than last week against Swansea, but he missed two great second half chances to score.

Diafra Sakho
Well off the pace today. A bad day at the office for our leading goalscorer, but nothing to be concerned about.

Enner Valencia
(replaced Nolan) Barely had an impact on the game suring his 14 minutes on the pitch. Good to see both him and Sakho back however after recent injury.

Joey O Brien
Did not play.

Morgan Amalfitano
Did not play.

Mauro Zarate
Did not play.

Carlton Cole
Did not play.