West Ham have to do it all over again after they were denied passage into the fourth round of the FA Cup by an injury-time equaliser from Romelu Lukaku at Goodison Park tonight.

The Irons, cheered on by a small yet vocal travelling contingent had taken a 1-0 lead early in the second half through central defender James Collins. However West Ham's old adversary scored his second of the season against United (legally, this time) to force a replay at the Boleyn Ground next week.

Although most in the camp would have probably taken a replay prior to the game, there will no doubt be huge disappointment given the timing of Lukaku's goal. Goalkeeper Adrian had barely had a save of note to make before the Belgian international found the back of the net.

Blues' under-fire manager Roberto Martinez - who was preparing to leave the field to a cacophony of boos before Lukalu saved his skin - claimed after the game that an Everton defeat would have been "criminal". However there was no doubting that it was Sam Allardyce's team who were mugged, having controlled much of the game.

With both sides missing a number of key players, the opportunity arose for several players on the fringes of both first team squads to stake a place for future inclusion. For West Ham that meant starts for Matt Jarvis, Kevin Nolan and Enner Valencia, who were all hoping to impress having found themselves on the bench in recent weeks (or worse in Jarvis' case).

Winston Reid - who despite being on the verge of leaving West Ham put in a tremendous performance tonight - had West Ham's first meaningful chance of the night when he nodded wide with the goal at his mercy. Stewart Downing then drew a fingertip save from stand-in 'keeper Joel with a vicious drive.

Everton responded with a couple of half chances before Downing and Morgan Amalfitano failed to test the goalkeeper. Bar a brief moment of panic - when Adrian spilled a shot before Reid intervened to save the day - West Ham survived the first half comfortably, having enjoyed 56 per cent of possession. 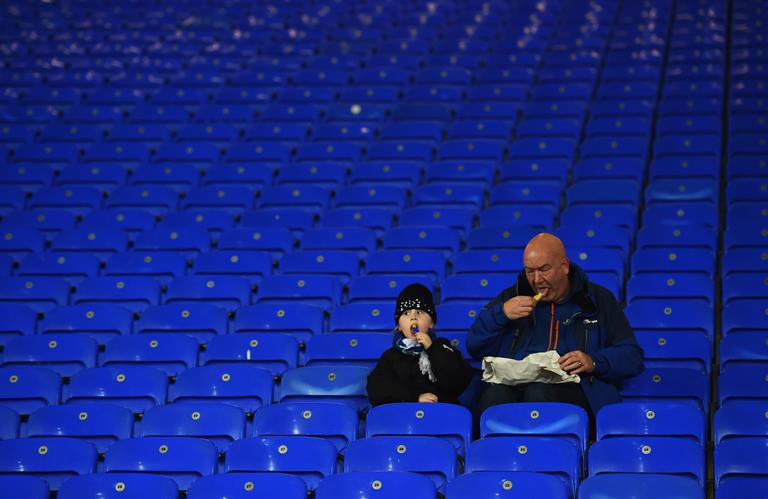 Carl Jenkinson, who had a lively game on the right flank forced another good stop from Joel five minutes after the restart, which should have been a wake-up call for the home side. However they failed to heed the warning and with 56 minutes on the clock, Collins rose unchallenged to convert Downing's corner at the near post.

The game could - and according to Sam Allardyce after the game, should - have been ended as a contest just 60 seconds later when Mark Noble centred from the left wing. Unmarked, new dad Enner Valencia had the goal at his mercy but could only guide his header towards the roof of the net, providing Everton's reserve 'keeper with the opportunity to tip it over the bar.

The goal finally saw the Blues start to play with some spirit and three minutes after he gave West Ham the lead, Collins was on hand once again to hack Lukaku's goal-bound effort away to safety from under the crossbar. Ross Barkley tested Adrian at his near post with a stinging effort from an acute angle before Everton finally found their way back into the tie.

Well into the second of four added-on minutes, Oviedo profited from some desperate defending by the Hammers to find himself in space to the left side of the penalty area. His cut back found Lukalu, no more than five years from goal; the striker had time to take a touch before smashing the ball into the corner of the net.

The replay is set to take place on Tuesday, 13 January; tickets for the game are priced from ??20 for adults.

Gutted not to have won the game and to concede so late. Happy to have got on, look forward to the replay next week at our place! ????

Adrian San Miguel del Castillo
Not a great deal to do; made one good save from Barkley but there were a couple of fumbles too.

Carl Jenkinson
Very energetic, got forward well although failed to pump in the usual quota of crosses from the right, mainly because his side was targeted by Everton for much of the game.

Winston Reid
He may be on his way, but if there were any questions over his commitment they were quickly dispelled here. An outstanding performance from the Kiwi.

James Collins
Pretty dreadful before the break, pretty awesome thereafter - and the goal is worth an extra point.

Kevin Nolan
Quite possibly the least effective performance by a West Ham player this season. The game simply passed him by and his attempts to hold on to the ball deep into injury time were pitiful. However you can't blame Kevin Nolan for being kept on for 94 minutes, when he was clearly blowing some time before that.

Morgan Amalfitano
Kept Everton busy as he looked for avenues in which to make mischief. Could perhaps have done better with his chance in the second half.

Mark Noble
Good to see Nobes back for the full 90, although his tendency to slow down play prevented West Ham from fully utilising Enner Valencia's pace.

Matt Jarvis
There's no lack of effort or willing to earn a proper living. He's just not showing enough to suggest he's up to Premier League standard.

Stewart Downing
The key to much of West Ham's inventiveness. Here's a player who shows no signs of fatigue - despite having been invovled throughout the Christmas period.

Enner Valencia
His lethargy may perhaps be down to a string of sleepness nights, having become a father two weeks ago. Whatever the reason, our Columbian World Cup star is doing little to suggest he should displace either Diafra Sakho or Andy Carroll. Had he scored his golden opportunity, things may have been different.

Carlton Cole
(replaced Valencia) Sad as it is, poor CC looks well off the pace. Irregular football isn't helping but he's bringing little to the party currently, whether utilised as a starter or an impact sub.

Diego Poyet
(replaced Jarvis) Probably not an ideal situation in which to thrust a naive youngster, but Poyet was a little 'peripheral' during his time on the field.

Joey O Brien
(replaced Amalfitano) Thrown on to preserve our slender lead. Threw himself into a tackle that he lost - which subsequently led to Everton's equaliser.

Ricardo Vaz Te
Did not play.